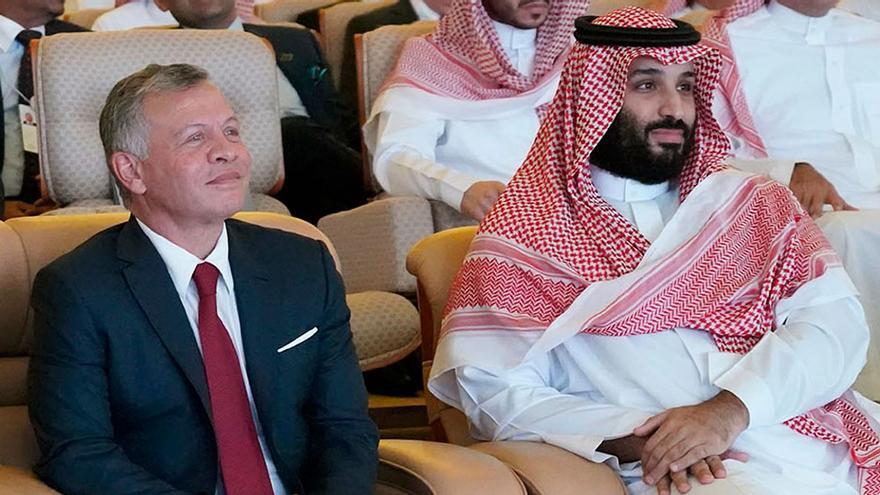 The former crown prince of Jordan said this Saturday that he is “under house arrest“and denied having participated in a plot against his stepbrother, King Abdullah II. Some media have claimed that it was”an apparent coup attempt “ against the monarch.

In a video broadcast to the BBC, Prince Hamza claimed that the army chief of staff went to his house and told him that “he was not authorized to leave it.”

Prince Hamza said he was not involved in any conspiracy and “is not responsible for the degradation of governance, corruption and incompetence” of his country’s authorities. “It has reached a point where no one can express their opinion on any matter without being threatened or arrested,” he adds.

In addition, Jordanian security forces have arrested several people “for security reasons,” including a former adviser to King Abdullah II and a member of the Jordanian Royal Family, amid the uncertainty about Hamza’s situation.

The former adviser has been identified as Basem Awadalá, a former confidant of the monarch and former Minister of Finance. The member of the Royal Family has been identified as Sharif Hasan Ben Zaid, according to information from the official Jordanian news agency, Petra, which does not provide further details. The sources of the agency have limited themselves to indicating that “an investigation is being carried out”, without giving more details.

Awadalá was considered a promoter of economic reforms in the country, which for many years has faced resistance from an old guard who dominated the court, according to the newspaper ‘Washington Post’, whose sources understand that this investigation would be related to an alleged coup attempt in the country.

Also Read  Zemmour is not Trump, but he can be president

There could be up to 20 detainees

According to the sources of the newspaper, a total of 20 people have been arrested in connection with this alleged plot.

Now it remains to be seen how the situation of the former crown prince and half-brother of the monarch, Hamza bin Husein, is resolved, who has sent a video through his lawyer to the British chain BBC in which he assures that he is under house arrest despite that the Jordanian General Staff reported that had simply admonished him to refrain from destabilizing the country.

“I had a visit from the chief of staff of the Jordanian armed forces this morning in which he informed me that I was not allowed to go out, communicate with people or meet with them, because in the meetings in which I was present, or in the social networks related to the visits I made, there were criticisms of the government or the king, “Hamza explained in the video, in which he denied that it was he who made these accusations.

“It has reached a point where no one can speak or express their opinion about anything without being intimidated, arrested, harassed and threatened,” he concludes.

Hours earlier, the Petra agency had denied, first through “well-informed sources” and later through a statement from the General Staff, that the king’s stepbrother – 41 years old, and crown prince between 1999 and 2004, when the The monarch withdrew him from the succession for the benefit of his son, Hussein bin Abdullah – he was immobilized at his home.

The head of the Jordanian Joint Chiefs of Staff, Yusef Ahmed al Hunaiti, limited himself to confirming that Hamza had been asked to “stop any activity and movement against the security and stability of Jordan.”

The spokesman for the US State Department, Ned Price, said that Washington “closely followed” these reports. “We are in contact with Jordanian officials. King Abdullah is a key partner of the United States and he has our full support,” he said.

Saudi Arabia reacted by expressing “its full support for the kingdom of Jordan. […] and the decisions and measures taken by King Abdullah II and Crown Prince Hussein to safeguard security and stability. ”

The arrests took place days before the celebration of the centenary of the kingdom. On April 11, 1921, King Abdullah, leader of the new state of Transjordan, formed his first government after the creation of the emirate in March 1921, along with Palestine during the British mandate.