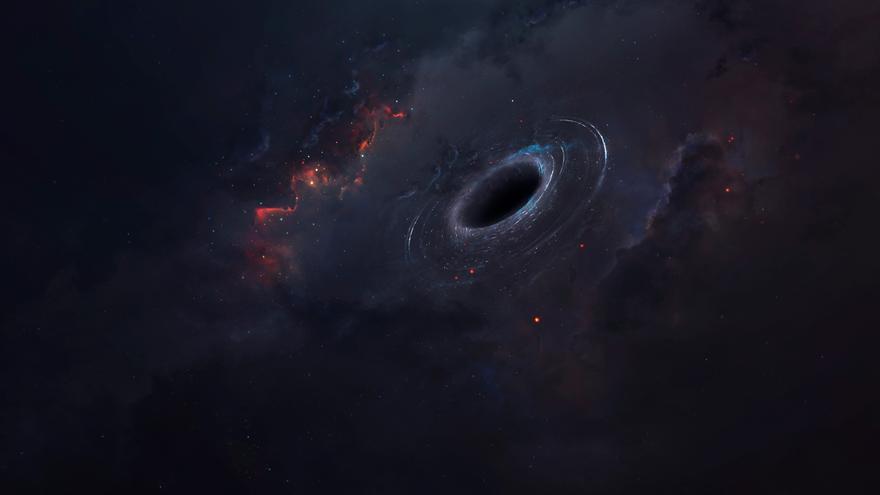 An alternative model of how the universe proposed that the black holes could be created immediately after the Big Bang, which could explain what dark matter is and how supermassive black holes arose.

The study, accepted for publication in The Astrophysical Journal, suggests that Primordial black holes, which would have existed since the beginning of the universe, could in turn form dark matter, which is still unknown and of which only some properties are known.

Research shows that, “without introducing new particles or new physics, we can solve mysteries of modern cosmology, from the nature of dark matter to the origin of supermassive black holes “, said one of the authors, Nico Cappelluti, from the University of Miami (United States).

If most black holes formed immediately after the Big Bang, could have started to merge in the early Universe, forming increasingly massive black holes over time.

Image of a black hole. Abstract space wallpaper. Black hole with nebula over colorful stars and cloud fields in outer space. Elements of this image furnished by NASA.

“Black holes of different sizes remain a mystery. We do not understand how the supermassive type have been able to grow so much in the relatively short time since the Universe exists “, highlighted Günther Hasinger, Scientific Director of the European Space Agency (ESA) and also author of the study.

At the other end of the scale, there could also be very small black holes, as observations from ESA’s Gaia mission suggest, and if they exist, they are too small to have formed from dying stars.

ESA’s future gravitational wave space observatory, LISA, could pick up the signals from such mergers if primordial black holes exist, and the smaller ones could be simply because they have not yet been merged into larger ones.

According to this model, the Universe would be full of black holes everywhere and stars would begin to form around these “dark matter” clusters, creating solar systems and galaxies over billions of years.

If the first stars actually formed around primordial black holes, “They would exist earlier in the Universe than the standard model expects.”

“Primordial black holes, if they exist, they could well be the seeds from which all black holes are formed, including the one found in the center of the Milky Way “said another of the authors, Priyamvada Natarajan of Yale University.

The Euclid mission of the THAT, which will explore the dark Universe in more detail than ever, could play a role in the search for primordial black holes as candidates for dark matter.

What’s more, the new James Webb space telescope, a “cosmic time machine” that will go back over 13 billion years, will shed more light on this mystery.

If the first stars and galaxies were already formed in the so-called “dark ages”, the James Webb, which is scheduled to launch before the end of this year, you should be able to see evidence of themGünther added.