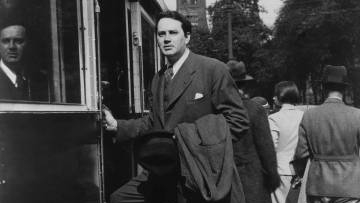 Any reader interested in knowing how a writer is born and made on the inside has to read the pamphlet by the American novelist Thomas Wolfe (1900-1938) entitled Story of a novel, which is being published these days in Spain, with an exceptional translation by Juan Cárdenas, in the Periférica publishing house. After reading this short book by Thomas Wolfe, this question arises: Where does so much enthusiasm, so much passion come from? It comes from Wolfe’s soul, of course, but mostly it comes from the United States. He comes from a country that has more than nine million square kilometers, more than 19,000 kilometers of coastline, and more than 300 million souls.

Historia de un novela is a wonderful autobiographical book in which Wolfe faces the doubts that plague every novelist. Wolfe’s originality consists in transforming those doubts into a hypnotic mix of literature and despair. How many hours do you have to write a day? Should you travel? Do you have to live in Paris? Can you be a writer without having lived in Paris, or London, or Berlin? And what is done with the immense loneliness that takes hold of a writer who is living in Paris in the 1930s in search of literature as if it were a material and corporeal reality? Is there happiness in creation? What is success? Wolfe lived with suffering the bad reception that his first novel had in his town. It triumphed in readers and critics, but unleashed hatred, or misunderstanding, in residents of the city of Asheville, North Carolina.

The case of Thomas Wolfe serves as an example in literature workshops to illustrate the complex relationship of a writer with his publisher. Wolfe’s publisher was Max Perkins, and without him Wolfe’s first novel, titled The angel who looks at us (1929), probably would not have been successful. Perkins was actively involved in correcting and removing pages from Wolfe’s two great novels. Filmmaker Michael Grandage brought the passionate relationship between writer and editor to the big screen in the film The book publisher (2016). It is worth remembering some other memorable case of artistic marriage like that of Charles Bukowski and his editor John Martin. We are talking about editors who knew how to see talent in simple manuscripts. The first editor of this caliber in the twentieth century was, in a way, Max Brod, Franz Kafka’s friend, who realized that in the posthumous file of an anonymous tuberculosis patient was the most enigmatic and valuable literary work of the twentieth century. . Interestingly, Wolfe also died of tuberculosis. The figure of the literary editor is almost extinct today, and it is a shame, because we live with too much superstition the concept of authorship. Nowadays it is often the so-called table editors of the large groups in the book industry who suggest changes or corrections to the writers.

I wanted to write a novel that was equal to the United States. The only way to achieve inner peace was for literature to have the same pages as life

There are writers who do not allow themselves to be touched even a comma. I have never understood it, because in reality a manuscript is always perfectible. And the human thing is that the writers doubt what they have written. A writer who does not doubt is a dead writer. One of the greatest acts of generosity that I have seen in my literary life happens when an editor steps into the shoes of the writer and from there suggests changes that improve the novel. Generic tips are not worth it. It is not worth saying “lighten the dialogue a bit” or “such a character has not just taken off.” No, what Perkins did with Wolfe is almost an act of spiritism. It is getting into the shoes of the writer, renouncing his own identity, and from there, from that complicated place, being someone else, helping to improve, that is, helping to amputate. Knowing what is left over, that is the gift and the mystery.

Also Read  'One side of me is lost forever': two more rugby players open up to concussion | Rugby union

The pages of Story of a novel dedicated to the writer’s pain at the need to eliminate parts of Of time and the river (1935) due to the aesthetic imperative of the editor. Wolfe’s literary project was continental: he wanted to represent American life in his novels. He wanted everything: the cities, the streets, the houses, the bricks, the roads, the streetlights, the people, the living and the dead. He lived a destructive literary thirst. He was a visionary, and he suffered because he was in love with the beauty of the world. Wolfe was irrepressible. I wanted to write a novel that was equal to the United States. The only way to achieve inner peace was for literature to have the same pages as life. But that was impossible. His friend and editor told him, and he agreed to the deletion of thousands of words. Wolfe was also a forerunner: he measured novels by the number of words, as we do now with our computers. Both Perkins and Wolfe were two great romantics. They lived literature as a state of perpetual excitement. And that looks great on Story of a novel, one of the most dazzling and frenzy of authorship confessions I have ever read.

Also Read  It will be because of A Rod ... Jennifer López in her new song says: "He doesn't deserve to have her in his arms"