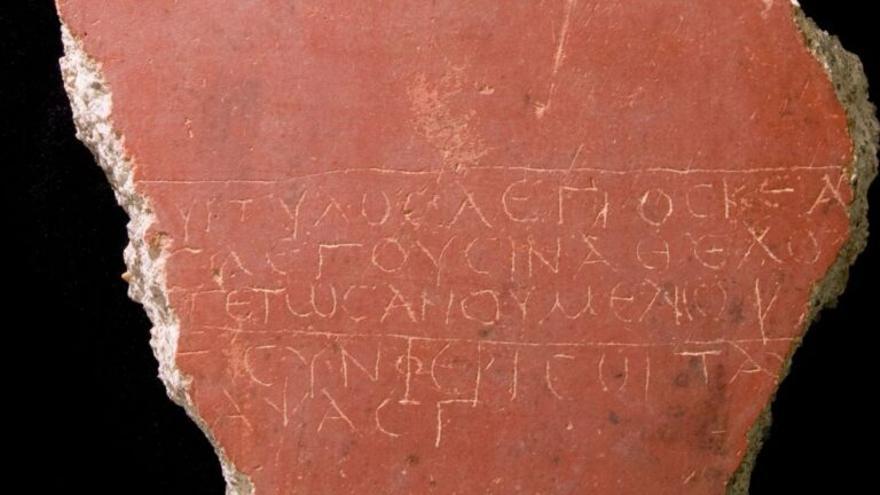 There are testimonies of written language in the form of poetry in Egyptian hieroglyphics from 25 centuries BC, and Greek lyrical poetry dates back to Hesiod to about 600 years BC.

However, surprising new research has found that a very popular text across the world Roman empire de Oriente in the 2nd century, which has been found inscribed in 20 gemstones and as graphite in classical ruins in Cartagena, Spain, uses a different form of meter than generally found in ancient Greek poetry, employing stressed and unstressed syllables .

The author of this discovery, Cambridge University Professor Tim Whitmarsh, explains in a release that “accented poetry,” the ancestor of all modern poetry and song, was unknown before the fifth century, when it began to be used in Christian Byzantine hymns.

Before the emergence of stressed poetry, poetry was quantitative, based on syllable length, notes Whitmarsh. The new research reveals that modern poetry began much earlier than has hitherto been estimated.

Missing link The new study, published in The Cambridge Classical Journal, also suggests that this ancient poem could represent the missing link between the now-defunct world of ancient oral poetry, Mediterranean song, and the more modern forms of poetry that we know today.

The poem, unmatched so far in the classical world, consists of verses of 4 syllables, with a strong accent on the first and weaker on the third. This allows it to fit into the rhythms of numerous pop and rock songs of our time, Whitmarsh notes somewhat perplexed.

He adds: “We have known for a long time that there was popular poetry in ancient Greek, but much of what survives takes a form similar to traditional high poetry. This poem, however, points to a distinct and prosperous culture, mainly oral, which fortunately for us in this case also found its way into a series of precious stones. ‘

It also highlights that the dominant form of Byzantine verse, which is part of the culture of the Christian Middle Ages, developed organically from changes that occurred in classical antiquity.

Mass individualism The discovery has other derivatives as well. Whitmarsh notes that it sheds new light on an emerging culture of “mass individualism” characteristic of our own late capitalist consumer culture.

It is based on the fact that the poem was written on precious stones that circulated among distinguished people in Roman society, as evidenced by the cameo preserved around the neck of a young woman buried in a sarcophagus in what is now Hungary.

“When you have people in a great empire eager to buy things that connect them to centers of fashion and power, you have the conditions for a simple poem to go viral, and that is clearly what happened here,” explains Whitmarsh.

In its abridged version, the ancient poem states: They say what they like; let them say it; I do not mind«. Other versions are extended with Go ahead love me, it’s good for you.

That the den For Whitmarsh, the poem reflects society’s disapproval of an unconventional relationship that could give the poet the current equivalent of “screw it up.”

The poem allowed people to express defiant individualism, differentiating them from trivial gossip, the study suggests.

What mattered to that culture was the genuine intimacy shared between two lovers, a sentiment that was malleable enough to suit virtually anyone, Whitmarsh notes.

The poem surely became popular because it allowed people to escape the local pigeonhole and claim their participation in a network of sophisticated people who understood this type of playful and erotically charged discourse, the study notes.

Pop culture The fact that the material supports of the poem have been mass-produced and distributed from Spain to Mesopotamia, suggests that most of them were bought by numerous people in Roman society.

The Roman Empire radically transformed the classical world by interconnecting it in many ways. This poem does not speak of an order imposed by the imperial elite, but of a pop culture, emerged from the bottom up, that extends throughout the empire, highlights this research.

The poem is also a work of visual art, designed to be seen (particularly in its gemstone format), the author writes in his article.

This hybrid status, between high art and popular culture, can also be detected in the content of the poem, which points to both the poetics of intellectual elitism and a level of sexually aggressive affirmation of individuality.