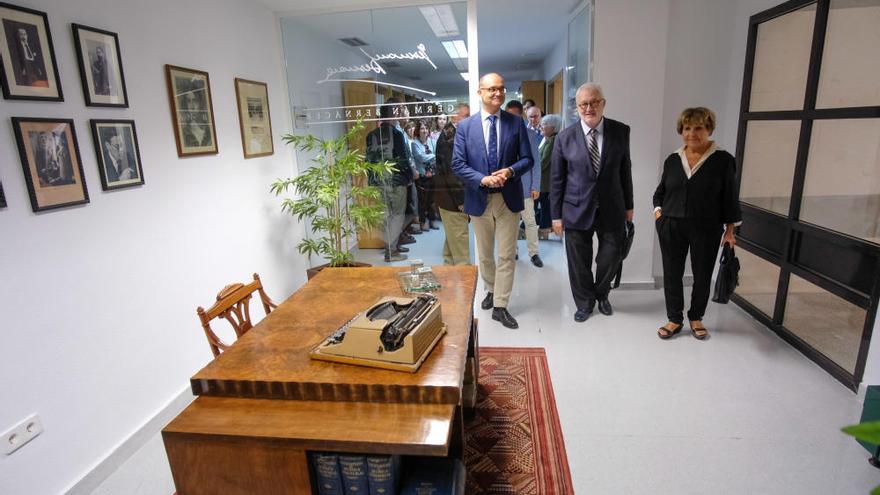 On Tuesday we inaugurated in the hall of the Faculty of Economic and Business Sciences the exhibition “Germán Bernácer, the most universal humanist-economist from Alicante ”, with which we commemorate that they are fulfilled 90 years since Bernácer, one of the fathers of macroeconomics, will join the Bank of Spain to lead, next to Olegario Fernández-Baños, the recently created Issuing Bank Research Service.

The Forum, the University of Alicante and the Germán Bernácer Chair, with the collaboration of the Mediterranean Foundation, have promoted an exhibition that will tour the province of Alicante to claim the extraordinary and unknown figure of Germán Bernácer. This exhibition is an act of justice to give the dissemination it deserves to the Spanish economist with the greatest international projection in history, but also to his multifaceted profile.

The opening of the exhibition had the best possible protagonist: Óscar Arce, the general director of Economics and Statistics of the Bank of Spain, his successor in the position almost a century later, who gave a magnificent dissertation on “The Spanish economy in the area of euro: situation, perspectives and challenges ”.

This unique event has allowed me to remember that when we started the Forum, we were not aware of the importance that it would have to accept the suggestion of my friend Fermín Crespo to name our organization the German Bernácer Legal and Economic Debate Forum and begin to approach the family. to support the initiative. Everything was facilities.

Since then we have been faithful to our commitments to keep alive his colossal work, which has made him one of the fathers of modern Macroeconomics, but also its intellectual and human dimension.

In a brief review of the most relevant milestones reached since 2014, I believe that we can be satisfied with our contribution to maintain and spread the spirit of Germán Bernácer. We are aware that we have many projects to undertake, but in these seven years: we have maintained a constant agenda of events in which front-line personalities such as Antonio Garrigues, Carmen Herrero, Valentín Pich, José María Roldán, José María Gay have participated. de Liébana or Eric Maskin, among others; We have created, with the support of the University of Alicante, the Germán Bernácer Chair, which has become the center for the recovery and dissemination of Bernácer’s work and figure; and open our activity to numerous groups with which we have collaboration agreements.

For decades I have been practicing the profession of economist and I am aware of the general ignorance of Bernácer’s work. As I have been delving into his economic texts, I have perceived an unusual coherence from his first work entitled “Society and Happiness” (1916) to the last, “A Free Economy, without crisis and without unemployment” (1955). Between the two there are other publications that reveal his innovative thinking.

Bernácer was an enlightened and restless visionary. The current concept of the “happiness economy” was anticipated a century. In his texts, he poses the economy as “the most fundamental conditioning factor of social evolution in all its manifestations.” He made an effort to respond to the problems he encountered at the beginning of the First World War, fundamentally the “disorder” that caused economic and cultural inequality.

According to Professor Juan Zabalza, the parallels between the Great Depression and the economic turbulences of the early 21st century give Bernácer’s reflections an unusual topicality, considering economic science as the instrument capable of understanding the complexity of depressions and recessions economic.

From his time at the Research Service of the Bank of Spain are his numerous chronicles and reports issued between 1932 and 1936. In them he analyzed the economic situation, reflected on technical issues of a social nature and even advised those responsible for the Ministry of Finance to leave falling the peseta to maintain internal stability, instead of trying to maintain parity with other currencies.

His thinking predicted the mitigating effect that public investment has in the face of a recession and warned of the inconvenience of the financial burden and the displacement of private investment towards the capital market, instead of towards productive investment. A situation parallel to the current one.

Obviously it was more palatable for the rulers to apply Keynesian theories that, in the middle of the 20th century, proposed that to get out of the depression state interventionism was necessary, with cheap money and a good dose of protectionism. Bernácer, for his part, was cautious, even against the new interventionist formulas.

Zabalza points out in his last publication that Bernácer was an independent and original thinker, free from all kinds of ideological prejudice and, therefore, difficult to classify if we stick to the usual categories of the various economic currents.

Despite his extraordinary contributions, his work has lived in silence and due to the originality and radicality of his approaches, but also to his lack of prominence during the time in which he lived.

For these reasons, the members of the Forum believe that the time has come for us to rescue Germán Bernácer from ostracism, to recognize the value of his work, his thought and his humanism. This exhibition will give him the visibility that his intellectual stature deserves and will make us feel proud of this distinguished man from Alicante for his contributions to world economic science.