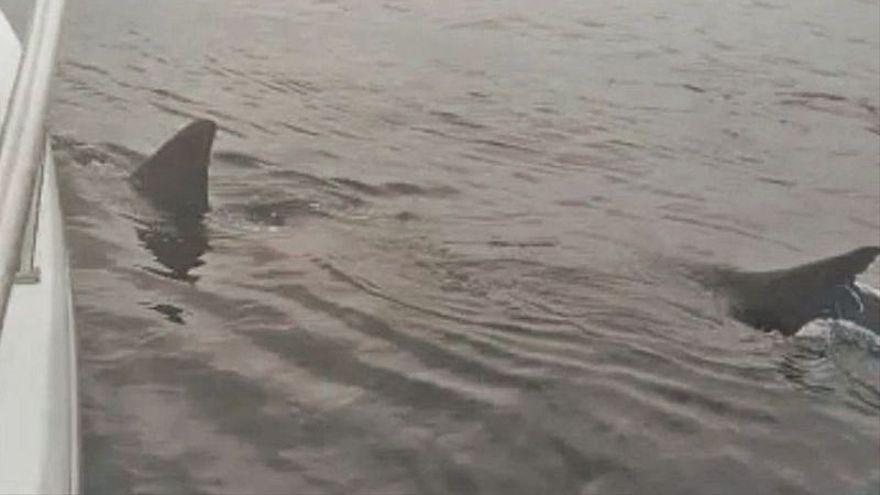 González admits that he got a little nervous both because of the size of the animal and because of its teeth. He came to feel the movement of the boat when the huge animal collided with him: “I was touching the boat and I felt it a little glancingly because it was going very slowly.” It also seemed “very rare” to find such a specimen in that place and set out to record it with his mobile, making several videos from which the captures that accompany this information come out.. But, without a doubt, what impressed him the most were the teeth of a specimen that was slightly less long than the boat, seven meters: I was a little scared ”. “It was not the right day to sink into the ship,” he adds with good humor.

Juan Carlos González was reminded of the recent sighting of a similar animal off the coast of La Coruña and a sailor known to him had told him that another of the style had also been found in Guetaria (Guipúzcoa). The fisherman wonders if the one from Coruña will not be “the same” that he saw or if, on the contrary, it is more common than is thought to see this species in the Cantabrian Sea.

Questions for which the director of the Oceanographic Center of Gijón has some answers, Rafael González- Quirós, which recognized New Spain, a newspaper that belongs to this group, Prensa Ibérica, that the presence of white sharks, not only in the Cantabrian but in Spanish waters, is “rare”. In fact, he adds, “I don’t remember more than the one in La Coruña a few days ago and a previous one in the Mediterranean.” Despite this, the biologist does not consider that his find ten miles from Ribadesella is related to climate change. “In the end, they are big bugs and have a lot of movement capacity,” he says. For its part, Francisco Sanchez, a researcher at the Oceanographic Center of Santander and head of the project on the marine canyons of Avilés, says that this species “needs large prey, mainly seals and sea lions, and it seems that the gray seal is becoming more common in the Cantabrian Sea.”

Luis Laria, president of the Coordinator for the study and protection of marine species (Cepesma), believes that the specimen sighted in Ribadesella is “almost certainly” the same that was seen earlier this month in the outer port of La Coruña. “His presence in the Cantabrian Sea is totally strange. There are very few or no quotes. There was talk in 2014 about a possible white shark, but we think it was a shortfin shark ”, he explains. Laria associates the current finding with “nutritional factors”. “At this time of year it feeds on tuna, in Galicia they also considered the possibility, and I agree that the shark was able to get closer to land to avoid the killer whales, which is its direct enemy. And now, due to the incidence of the current, it can move towards the Bay of Biscay ”, he points out.

The also director of the Parque de la Vida de Luarca clarifies that the distribution area of ​​the white shark does not reach the Cantabrian Sea, but “reaches the south of the Iberian Peninsula”. In any case, “its presence in the Strait of Gibraltar is sporadic.” Luis Laria sends a message of “tranquility”, as he assures that it is not a dangerous species. “The Steven Spielberg films did tremendous damage. In the Gulf of Mexico is where more attacks occur, but like there are other species. What we must do is admire that this type of sharks is still alive because we are ending everything, “he says.. In Valdés they have precisely a replica of one measuring 5.30 meters, like the one found 60 kilometers from Monaco in the 2000s.

Also Read  Ruby Wax on Life After Loneliness: 'I always felt isolated. Mindfulness helped me take off my armor '| Loneliness