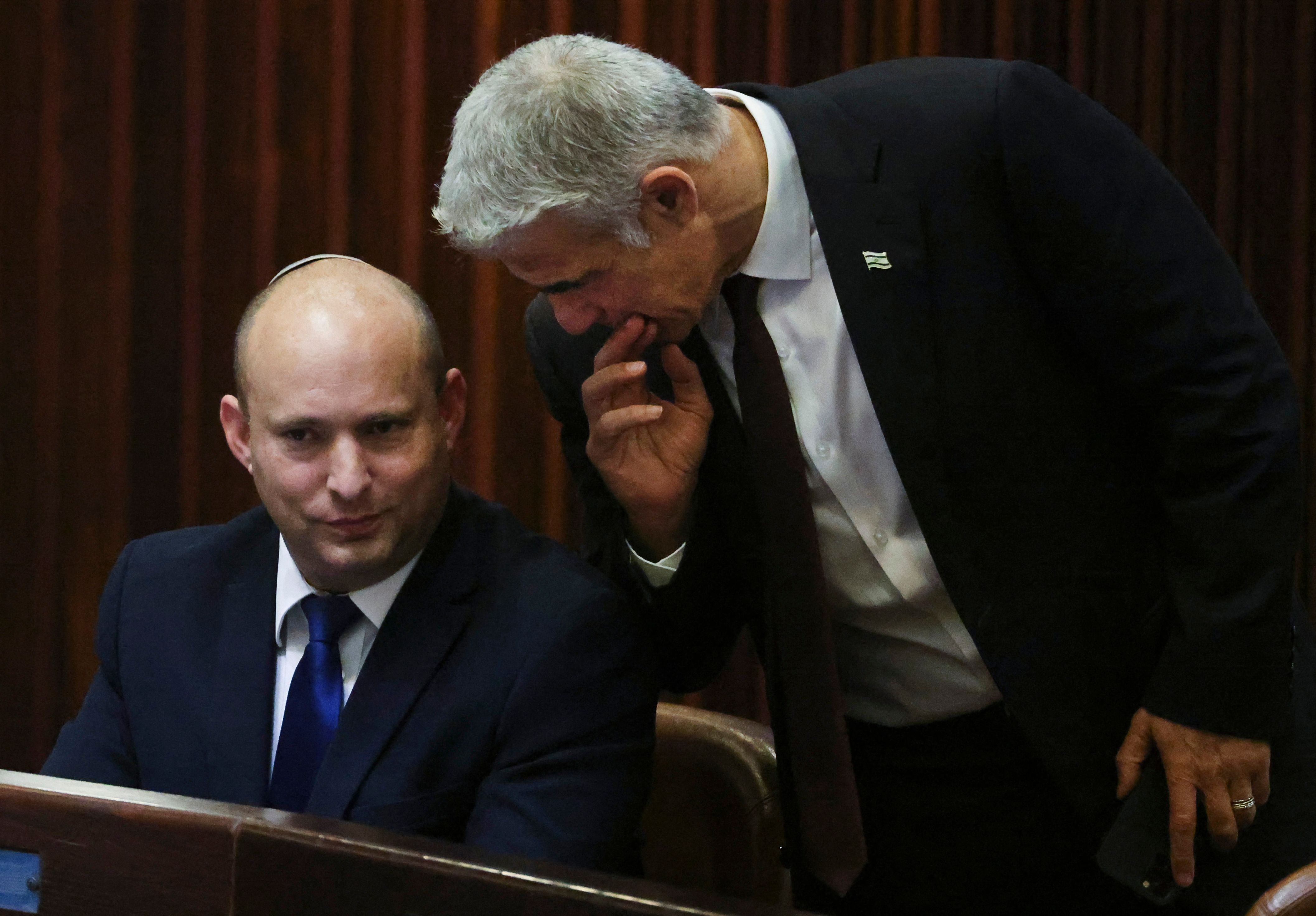 The leaders of Israel’s opposition parties have agreed shortly before midnight on Wednesday on an unprecedented government pact, on the verge of the expiration of the legal term granted by the President of Israel, Reuven Rivlin. Eight heterogeneous political formations have pledged to vote together within a week in an investiture session that will remove the incumbent Prime Minister, the conservative Benjamin Netanyahu, from power since 2009, after the March elections, the fourth in just two years. The bitter disputes over the division of ministries have forced the prolongation of the negotiations to the limit.

An eight-party coalition – between three forces from the right, two from the center, two from the left and, as a great novelty, a party of the Arab minority – is unprecedented in the 73-year history of the State of Israel. In addition to dealing with the marked ideological differences, the promoter of the agreement, the centrist Yair Lapid, has had to try to satisfy all parties in the distribution of power plots. Even with three dozen ministerial portfolios at stake, the struggle has continued when the mandate was about to expire the head of state handed over Lapid four weeks ago.

With an agreement signed by all the leaders of the coalition in his hands, President Rivlin has to grant an extra week for the partners to finish outlining a government program. Lapid, however, will not be the one who submits to the investiture in the Knesset (Parliament of 120 seats) next week, but the conservative ultra-nationalist Naftali Bennett, who decided to contribute his decisive votes to the pact last Sunday in exchange for occupying the post of prime minister at the beginning of the legislature. Lapid has sacrificed himself despite leading the second most voted political formation, after Netanyahu’s Likud, at the polls in March. Now he will have to limit himself to serving as foreign minister until mid-2023, when he will rotate with Bennett in their respective positions.

These kinds of political compromises, common in the fragmented Israeli political scene, make it difficult until the last moment to reach agreements. After centrist Benny Gantz finalized his aspirations for several portfolios on Tuesday, Labor leader Merav Michaeli clashed yesterday with Ayelet Shaked, the number two Yamina, Bennett’s party, for control of the government’s strategic judicial appointments commission. A rotation pact between the two apparently settled the dispute.

The leader of the Arab Maan party, Mansur Abbas, whose votes are essential to add the absolute majority of 61 deputies in the Knesset, hopes to inaugurate a stage of demands from power in favor of the Arab community (21% of the population of Israel) , so that your needs are taken into account. As a first measure, he has demanded that the Bedouin of the Negev (in the south of the country) stop being evicted from some of their villages to build Jewish cities, and that the policy of systematic demolition of buildings built without a license in cities of Arab majority.

The rapprochement between the parties seems to have advanced, according to the Israeli media, which were waiting for the agreement to become official amid a news blackout. But the Hebrew press already took it for granted that peace negotiations with the Palestinians and the role of the Jewish religion in the state will be issues that will be excluded from the agenda of the future government. The basic consensus revolves around the recovery of the economy after the pandemic, in a country that went from full employment in February 2020 to an unemployment rate of more than 20% last January, when an accelerated vaccination campaign was launched.

Bennett and Lapid have the backing of 61 deputies from three conservative parties —Yamina, Nueva Esperanza and Israel Nuestro Hogar—, two from the center —Yesh Atid and Azul y Blanco—, two from the left — Labor and Meretz, (pacifist) – , in addition to the support of Naam, an Arab religious formation, which has been related to the Muslim Brotherhood movement, born in Egypt and inspired by the President of Turkey, Recep Tayyip Erdogan.

This may be the main political turnaround in Israel – aside from the departure from power of Netanyahu, who is on trial for corruption – of the coalition agreement. The incorporation of the Arab minority to the Government was precisely promoted by Netanyahu in the last elections, by encouraging Mansur’s party to break with the Joint List (a coalition of forces of the minority of Palestinian origin) and promising aid for his community in return. of their support in the Knesset. The shot seems to have backfired. Maan has allied himself with the opposition out of tactical interest to obtain counterparts for the benefit of his voters. But now Netanyahu will no longer be able to sound the alarm that “Arabs are coming in droves!”, As he did to win the 2015 elections. The Arabs have already come and it is he who has called them.