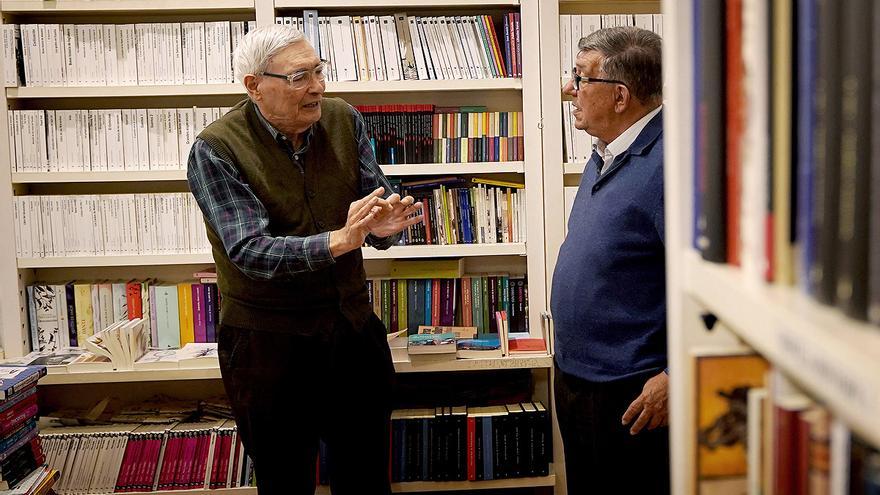 Two older Basques, when they meet after a year without seeing each other, will speak first of all about their missing friends. And these two Basques who look at each other between the shelves of the Lagun de San Sebastián bookstore have suffered two large and recent losses on their social radar: Joseba Arregui, former Basque Minister of Culture, former interviewer committed to the victims of ETA, and Mikel Azurmendi, ETA from the first batch that ended, like all the members of the band who deplored the violence, in the crosshairs of the pistols.

By law of life, the Basque Country loses valuable neurons. And they regret it Ignacio Latierro and Eduardo Uriarte. “From Jauregui and Azurmendi it must be appreciated that, in the face of such dramatic situations that we have experienced, both did an exercise in rationality that made them a benchmark for all of us who fought against barbarism,” says Latierro.

Books by Azurmendi and Arregui have inhabited the shelves of the symbol of freedom which is Lagun (Friend), the bookstore that the guerrillas of Cristo Rey tried to destroy with a bomb and, later, ETA with fire, paint, threats and an attempted murder.

The two interlocutors who chat about the 10th anniversary of the announcement of the end of terror are witnesses and protagonists of what happened since ETA was born in 1958. Latierro, from Gipuzkoa, did not think that he would end up taking escort policemen for years when he led the Communist Party in Euskadi and fought clandestinely against the Franco dictatorship. And that two guards would also cover his back for years was not an omen that Uriarte could do when participated in the founding of ETA and prepared explosives in the back of a college of friars. The band that Uriarte founded with other young people of the 60s besieged the bookseller that in the Transition inaugurated with Maria Teresa Castells and her husband, José Ramón Rekalde, the unique business through which, during the talk, a client who was only a girl ten years ago, when ETA said that it would stop killing forever, browses books. The gang tried to suffocate Latierro and his associates … and it was Rekalde who got there first, shooting him in the mouth.

Eduardo Uriarte was given ‘Teo’ by his colleagues from ETA because of the various masses he had to swallow one day while he was waiting in a church for a secret appointment that ultimately failed. It was member of Mario Onaindía’s ETA, with which he redirected part of the organization to politics in Euskadiko Eskerra, and Javier Etxebarrieta, the first to pull the trigger against a person in the band’s history.

“One time Maria Antonia IglesiasHe said of me, in a very fat book, that the worst of us are the neoconverts, ”Uriarte jokes, making Latierro laugh. And I said, ‘Please, no neoconvert, call me a traitor!’ Me I am a traitor because I betrayed a political project that ends in murder. I am a very honorable traitor. “Uriarte’s departure was relevant because the two of them were talking about ‘Maixabel’, the film that now occupies political and cultural conversations as the novel ‘Patria’ has been occupying for six years.

“The film has captured the spirit of Maixabel –Said Latierro, who is a friend of the widow of the murdered Juan Maria Jauregui-. And when introducing the characters describes well his breed, his condition: who have made an effort to ensure that there is freedom in this country and who have starred in a story of terror. Uriarte clarifies: “I still have tics from when I was in jail, at the time of making the bed or folding the clothes … and in the film I finally see a prisoner who suffers.” The expolimili sentenced to death in Burgos (1970) and received the subsequent amnesty believes that the film of the moment “is in search of ‘we can all forgive ourselves’. Maixabel’s attitude is generous, admirable, but tends to transfer to the ethical, or religiously if you like, what should come from the political level: compliance with the law. ”

The attitude of quasi indifference of these two Basques for the anniversary of the announcement made by ETA on October 20, 2011 is striking. “By then something relevant had already happened to me: I no longer had an escort for a few months. There was a threat that ETA would still do something outrageous, but it had already assumed the idea that they would disappear. ”

Also Read  La Palma volcano: those affected who want to rebuild their communities

“You could see the end of ETA coming because operationally it was already a disaster – Uriarte thinks – and the action of the police was getting better and better; the international support, evident, especially after the attack on the New York towers; and on top of that they made the mistake of killing a French policeman … The IRA had already surrendered; only ETA remained. What escaped me was the long negotiation process that takes place. ”

The Biscayan said that and the talk was opened to what was and what could have been, or not, and yes 2011 was the end of arms but not the defeat of ideas that put the bullets in the chambers.

In that negotiation, “ETA actually laid down its arms because it no longer had operational capacity, but there was a political interest in giving an outlet to their political arm. And that means that the discourse that ETA had promoted continues in Basque society, “says Uriarte. And Latierro qualifies it with a possible vision:” I also lived the negotiation with concern. Did it facilitate the future of the ideas that ETA represented? Surely it could have been done in a better way, but … a softer victory could also have occurred, where the concessions would have been greater, and the prison benefits would have existed, which in practice has not existed since. “And he adds:” Fortunately in the end was Rubalcaba, which eliminated some inconveniences … ”

Eduardo Uriarte has just returned from a vacation in Extremadura, La Mancha and Andalusia. He was accompanied by another former ETA member. “We both wanted to go for a walk in freedom,” he explains. Certainly, ETA no longer kills, “and I am glad, but I live in a contradiction, because I notice the social pressure, the discretion with which you have to behave in certain environments, to pronounce the word Spain, for example, which is a taboo, or to celebrate Oyarzábal’s goal with the national team, which I think was the only one in my entire block, although others would also like to celebrate it. environmental heaviness against people’s freedom “, says Uriarte, something that causes a daily tension: “When I enter the library of the University some look at me forgiving my life”.

Latierro responds: “It is evident that 50 years of terrorism so powerful, and with as much social support as the one it had, do not pass in vain. My biggest concern now is in the electoral days, when I continue to see that a significant percentage of Basques continue to vote for Batasuna, Bildu or whatever they want to be called. ”

And for this phenomenon, the Gipuzkoan intellectual sees an explanation, a coincidence in time of two political events: “I think there is something that has weighed us those of us who learned to be addicted to liberal democracy: when the positive moment of the The end of the terror coincides with the moment of greatest deterioration of confidence in Spanish democracy, in the PSOE and PP parties, and we have not been in the best conditions for the democratic rearmament of Basque society.

And in that, precisely, they coincide when they remember what they thought could happen after the end of the attacks. “I was convinced that the end of ETA was going to be accompanied by a very important drop in votes to the world of Batasuna, but that has not happened “, says Latierro, and Uriarte remarks from another position:” In the 90s I believed that a Euskadi without violence would be almost as if I were walking through the Plaza de España in Seville, “he laughs.

There has been no such, but there are other environmental details, symptoms of evolution, which Latierro celebrates: “I believe that today the majority sentiment in Basque society, including the world of the nationalist left, is that of I wish it hadn’t happened’”.

“I wish they hadn’t passed the mistakes made and the wasted years of my youth “, Uriarte sentence, and warns of the risk of turning the page without assuming responsibilities: “That ‘I wish it had not happened’ can be a palliative of the necessary feeling of guilt”.