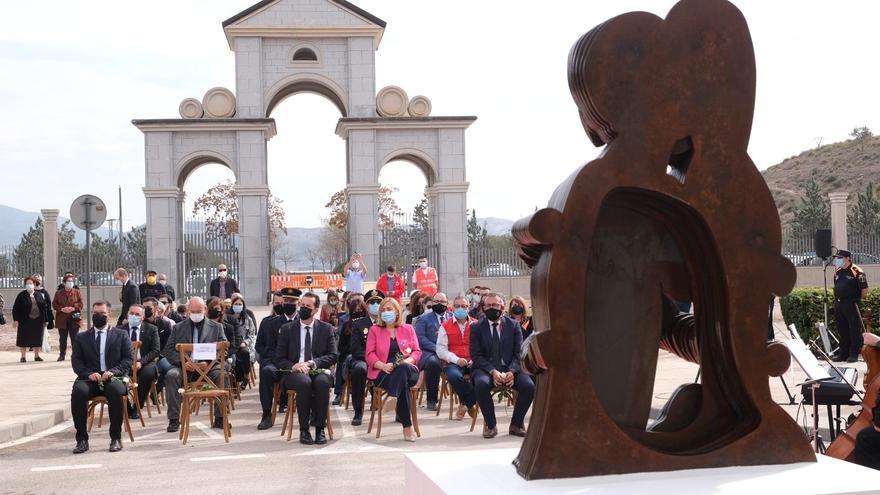 The sculpture, the work of the artist Brenda Estrella Cacciola and made of wrought iron, it represents a hug as a symbol of the harshness of a pandemic that prevented the deceased and deceased from feeling the love and warmth of their loved ones in such painful and complicated moments.

The event was attended by the entire Municipal Corporation, with the mayor Ruben Alfaro to the front, and also with those of the subdelegate of the Government, Araceli Poblador ; the commander of the MOE of Rabasa, Ernesto salinas ; the chief commissioner of the Elda-Petrer National Police, Bernardo Alonso ; the main chief of the Elda Local Police, Francisco Cazorla , members of Eldense civil society, as well as a representation of relatives of those killed by Covid-19.

After depositing a laurel wreath at the foot of the monument with the Eldense ruler, Antonio Cayuela , son of one of the first victims of the pandemic in the city, has spoken a few words in which he remembered his father: “ He was victim number 8 of the Covid in Elda and he left without being able to fire him. I thank the City Council for this monument, a sculpture that symbolizes the hugs that we were unable to give or receive and the plates represent one each of the families that we were unable to say goodbye to our loved ones during the pandemic, especially during confinement “.

Cayuela has explained her personal experience, “Which is not very different from the rest of the families. We thought it was not going to touch us, but I am in that percentage of people who have suffered the unexpected loss of a loved one and in conditions that we could not imagine. My father left without being able to say goodbye, without giving us a hug. I communicated it to my mother from a distance, also without being able to hug her because she had tested positive. Today I can say in front of this moment, thank you Dad ”.

For his part, the mayor of Elda has stated that “We cannot hide the fact that the most lasting measure during the pandemic was to prevent the wakes and the farewells to the lost relatives. Families find themselves with the pain left by the void left by loss without being able to shake hands, a kiss and much less a hug ”.

Rubén Alfaro has explained that “This monument wants to send all the deceased and their families a last hug, the one that we could not give them before leaving this world. There are thousands of hugs fused in memories and affection. The counter of deaths in Elda due to Covid-19 has stopped at 111, but this tribute is not a matter of numbers, it is a demonstration of the pain and sorrow that our city treasures for the loss of many neighbors who saw their lives cut short by a virus that has left us so many absences ”.

The mayor of Elda has had words of thanks and remembrance for all health, security and Army personnel and all those who helped during the most difficult moments of the pandemic, “And of course, we wanted to have the staff of the nursing homes in our city, where Covid-19 did so much damage. There were many days in which fate was not in our hands, but they understood that giving up was not an option. And I extend my congratulations to the entire team that has made this sculpture possible in a place with such emotional charge as this cemetery. There is no consolation for so much pain, but from today this sculpture is and will be a clear message for all these families: you are not alone, you have the eternal embrace of your city, of the city of Elda ”.

The monument includes a plaque with the following text: “The city of Elda, in memory of all the people who could not receive the affection and consolation they deserved in their farewell. To all the families who lost a loved one to the pain of not being able to squeeze their hand for the last time. To honor their memory, serve this eternal embrace as a token of the respect and humanity that the pandemic deprived them one day “ .

The City Council of Elda invites all citizens who attend during the next few days to the Virgen de los Dolores Cemetery to join this tribute from the entire city by placing flowers at the foot of the sculpture.

During these months of pandemic, many have been the families of our city who have lost loved ones, who left alone and without being able to receive a goodbye hug. Today, we wanted to remind everyone of what the virus took from us and also their families. In an emotional act we have discovered the sculpture ‘The Eternal Embrace’, with which we want to remind you today and always.

A plaque installed on the sculpture’s pedestal recalls that: “The city of Elda, in memory of all the people who could not receive the affection and consolation they deserved in their farewell. To all the families who lost a loved one to the pain of not being able to squeeze their hand for the last time. To honor their memory, serve this eternal embrace as a token of the respect and humanity that one day the pandemic deprived them ”.

Invite all Elders to come to the Virgen de los Dolores Cemetery in the next few days to lay a flower at the foot of the sculpture as a testimony of our collective memory.