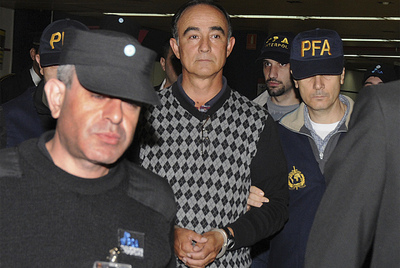 An unidentified woman called the prosecutor Roelof-Jan Manschot, then vice president of Eurojust, the European Union agency for judicial cooperation, in 2007. “Is it necessary to open a judicial process against the Argentine pilot? Because it is a painful matter for Máxima, ”he told the phone. Born in Argentina, Máxima, today Queen Consort of the Netherlands, was Princess of Orange, and Manschot found the question inappropriate. Without hiding his discomfort, he replied that it must have been much more painful “for the victims who were thrown into the void from airplanes, and for their families”, and something like that should be analyzed in depth. The pilot referred to by the unknown interlocutor is Julio Alberto Poch, 68, originally from Buenos Aires and also with Dutch nationality, a lieutenant in his country’s Navy during the military dictatorship (1976-1983). In his later employment as an aviator for Transavia, the Dutch airline, he allegedly boasted of having manned several of the death flights, used to assassinate dissidents by throwing them into the sea, and the Netherlands inquired whether this was true.

Poch was arrested in Spain in 2009, spent eight years in preventive detention in Argentina until his acquittal in 2017 due to lack of evidence, and asks the Dutch state for compensation of five million euros because he claims that it facilitated his detention. The commission commissioned by the Ministry of Justice in 2019 to analyze the role of the authorities in his case concluded this week that there was an attempt to influence the investigation, “possibly” from around the Royal House. Sources of the institution deny it.

The anonymous woman told Manschot that she was part of the Queen’s Cabinet, and when he demanded if “His Majesty” – Beatriz, the mother of today’s King William – was behind the call, the answer was no. He then explained that they had talked about the pilot “in our circle”, where it was doubted whether it was worth taking up the subject. The prosecutor did not ask the stranger for her name and did not take notes of the conversation because he thought it was a practical joke. The investigation commission collects the incident in detail and indicates that it has not been able to confirm it with the current King’s Cabinet. For its part, the Information Service of the Royal House has ensured that the kings and now Princess Beatriz “have not intervened in any way in this matter.”

A few months after the aforementioned conversation, a Dutch prosecutor indicated in an internal note that he did not understand the cancellation of a trip to Argentina to investigate the veracity of Poch’s statements about the flights. Later, several detectives attached to the case were removed. The commission does not know if this could have been due to interests of the Royal House, but they prefer not to speculate. “We have no indication that the investigation was thwarted,” say their spokesmen.

In 2007, Máxima had been married to Guillermo for five years and had overcome the rejection that her father, Jorge Zorreguieta, undersecretary of Agriculture during General Jorge Videla’s Meeting, aroused in the Dutch Parliament. The father always denied knowing anything about the disappeared, and the report commissioned by the Dutch government before the royal wedding concluded that although “it was inconceivable” that he ignored the repression of the military dictatorship, he remained on the margins of the violations of rights humans.

As already happened with the scandal of the withdrawal of family aid that brought down the center-right government in January, the case of Julio Poch shows the bad communication between the Cabinet and the Congress. In 2020, the Ministry of Justice acknowledged that it had not sent a document to the Chamber because it was “an internal document relating to diplomatic relations between Argentina and the Netherlands that is not usually sent.” According to the Nieuwsuur program on public television, this document reveals the deliberations between the two countries three weeks before the pilot’s arrest. There is no extradition treaty between Argentina and the Netherlands, and since Julio Poch also has a Dutch passport, stopping him was a problem. In the end, a formula was devised that consisted of providing the Argentine authorities with the data of the last flight before his retirement, in 2009, to Valencia. Buenos Aires had issued an international arrest warrant, and once in Spain, which does have an extradition agreement, requested its delivery.

Four months later, Poch said he agreed to return to his homeland in order to defend himself, and continues to claim that he did not make a first-person comment about the death flights during a dinner in Bali with other colleagues. Three of them, however, declared “due to responsibility” before the judges what they had heard. They then said that they had felt used by prosecutors in both countries. Poch also described it as shameful that the Argentine Prosecutor’s Office had accused him “without investigating the facts and without evidence against him.” This Monday, the investigating commission certified that providing the data of his flight to Valencia does not amount to a disguised extradition, and all the steps taken by the Netherlands are legal. It also says that the Minister of Justice in 2009, Ernst Hirsch Ballin, did not exercise political influence.