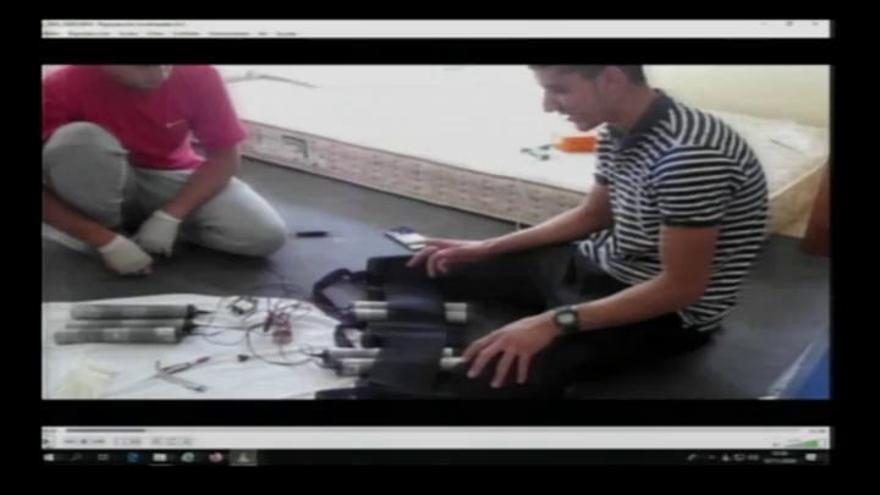 During the first day of the trial for the attacks in Barcelona and Cambrils, given the refusal of the main accused, Mohamed Houli Chemlal, to testify, beyond showing regret and ratifying his previous statements, Prosecutor Ana Noé asked the court to reproduce a video that he himself recorded of his colleagues from the terrorist cell in Alcanar’s house. In the images, found in a camera that the terrorists bought in Paris, several of them are seen preparing explosives, both in cartridges and in belts, and large quantities of the substance called ‘Satan’s mother’ appear in a room. The only participant in the recording that is still alive is Houli Chemlal, to whom the investigating judge already showed these images in his second appearance before him.

The camera was found among the ruins of that chalet, after the explosion that suffered on the night of August 16, 2017, in which the imam of Ripoll (Girona) around whom the jihadist cell was formed, Abdelbaki Es Satty, and one of the terrorists who appears in the video died , Youssef Aalla. On recording proclamations of the type are heard: “This is aimed at the enemies of God”, “We are waiting for you here”, “God promised us paradise and to you hell” and “This is going to explode on the heads of your women and your children.”

In the video recorded by Houli Chemlal, they appear, along with Aalla, Mohamed Hichamy and Younes Abouyaqooub, the former was killed by the Mossos after the Cambrils outrage, on the early morning of August 18, 2017, and the latter, the author of the attack in the Rambla, in Subirats.

They are seen in a room in Alcanar’s house where Hichamy, Abouyaqooub and Aalla are sitting together, making explosives and a vest with explosive charges. “Are you recording? look, look how we have done (€) look how you are going to suffer“Says one of them. Then he focuses on Aalla, who is holding a load while addressing the camera to say:” This so that you know that the Muslim has the dignity and strength with the power of God. That for you. ”

Then Hichamy takes the floor: “Allah has chosen us among millions of men to make you cry blood“Then it is Aalla who speaks again to point out:” Allah has promised us paradise, and you have promised hell. “Hichamy intervenes again provocatively:” Come, come. You are going to regret being born. “And then it is pronounced in Catalan (the rest is in Spanish or Arabic):” Above all you, Mossos d’Esquadra. ”

The three of them smile as Houli Chemal records and Abouyaqooub points out in Arabic: “With God’s help, we will protect our religion. Thank God the highest“Then the defendant redirects the camera to another room in Alcanar’s house. He opens the door to reveal a large amount of a white substance, which is considered acetone peroxide (TATP), one of the most powerful explosives. While showing the content of the room, utters: “This will open the doors of good and paradise.” It refers to the explosive known as ‘mother of Satan’.