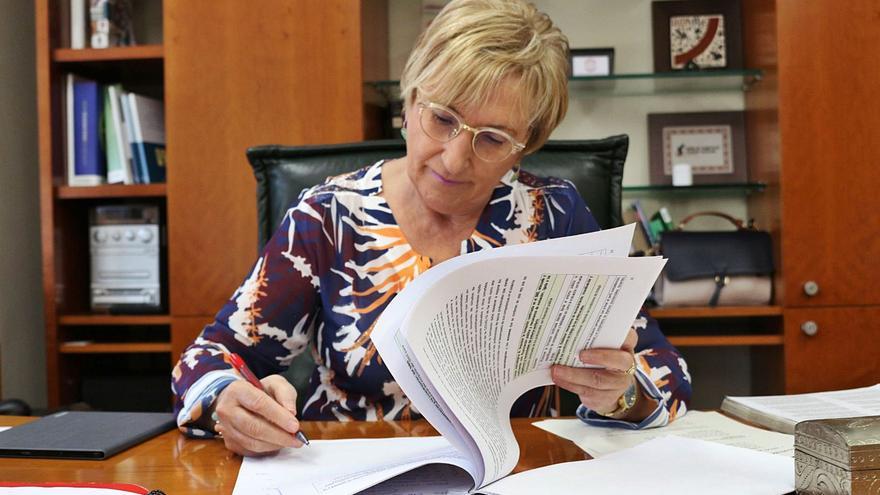 It has been a very special year in our lives. We have also discovered that the world is vulnerable and you have to be aware of it. This crisis, which has had economic and social consequences, has been hard for everyone. Being in charge of a ministry like this one, the responsibility is greater. It has occupied all the space of my worries, of my attention, of my feelings … of everything.

How can you disconnect from a day dedicated entirely to the pandemic?

It is very difficult. The hardest thing has always been the nights. Waiting if the phone rang, if something happened … it was difficult to disconnect and my body is still full of alerts and I can’t get to sleep.

How are you going to celebrate this year March 8?

Working. It symbolizes women a lot, because that is what we do every day, work a lot. Inside the home, outside the home, with the children … Demanding equality and vindicating the work of women, of all of them.

Telecommuting, quarantines of children, layoffs, Ertes … do you think that the coronavirus has been a brake on the advancement of women?

Yes, progress has stalled women. But in this year women have reinvented themselves and that must be recognized.

We started the pandemic with a man at the head of the ministry, now there is a woman. Do you think there are gender differences when it comes to handling a crisis like this?

No, sometimes the perspective of the problem we are experiencing changes. I have been just as comfortable with both of them. The two were very clear that the objective of the ministry was to coordinate all the actions of the National Health System and to reach agreements and bring positions closer together. In that sense there have been no differences. The only difference I find is perhaps that I see the minister more directly.

How is the vaccination? Will you be able to immunize 70% in summer?

Me I do not commit to that 70% if the arrival of the vaccines is not fulfilled that the ministry has moved us. He has not specified the number of vaccines. It does tell us that enough vaccines will arrive to have 70% of the population immunized. But I can’t commit If there is still an uncertainty and it is how the number of vaccines will be specified and when will the arrival of them be.

Do you agree with the dose distribution that has been made?

Initially, the dose distribution was aimed at the target population, people living in residences. And now, with Astrazeneca, we receive the doses based on the population weight of the Community.

And how do you explain why we are at the bottom of Spain in vaccination?

We have vaccinated 420 residences. All have received the first doses and the second are receiving an important part of it. Completing the doses depends on the date they were vaccinated, and that is strictly followed. There was a month when we received much less doses of Pfizer and they told us that they would complete them in successive deliveries. That was not met, so we could not administer the first doses in the planned time and that affects the second dose.

What do you think of people who have skipped their turn to get vaccinated?

It seems to me that they deserve a social reproach. We were all aware that the important thing was to vaccinate the most vulnerable people.

Just a social rebuke? Don’t you think there should be legal consequences?

That must be decided by the prosecutor. In my opinion, he should not have a criminal reproach, but that is my perception. The Prosecutor’s Office will further study the information and determine if there has been any reprehensible conduct.

Have you been vaccinated?

Will we have a relief from the restrictions shortly?

Let’s see it. The data indicate that the situation is improving. The number of infections and deaths is going down and all the indicators are relaxing. During this week we will hold meetings with the hotel and restaurant industry to see what measures can be alleviated and that it does not lead us to increase the risk.

The hoteliers complain that their businesses are closed and on top of that they charge late for aid, what to do to alleviate their situation?

We all sympathize with their situation, but health is a good that is above, which must be protected. The aid is not something that corresponds to us, but all the administrative procedures are being resolved so that they arrive. Lo important is to reach summer and regain economic activity and that the sectors can be reactivated.

What do you think of Madrid’s usual reluctance to close its community?

It is a totally unsupportive attitude. Madrid currently has an alert level 4, the highest in the territory. Asking that they also join the perimeter film seems to me the most normal and supportive in a pandemic in which the virus does not know of communities or territorial limits or political signs of those who govern them.

You mentioned summer. Do you think we can have a vacation similar to before the pandemic?

If a significant number of citizens are immunized and reach 70% -75% of the population, we can have it. But it will be a different summer, in which it will be necessary to maintain some socks such as the mask, hygiene, personal care …

Do you dare to set a date for the end of the pandemic?

No, I do not dare, because I do not know the behavior that the variants will have until the herd immunity.

Are you afraid of the arrival of a fourth wave?

Never rule out anything. During the pandemic we have learned to be prepared and alert. We have very good data, but we must continue to be very cautious. The moment we lower our guard, the virus creeps back into our lives.

Is there not a formula that allows us to face a new wave without the need to paralyze operating rooms and close health centers?

It is difficult because it depends on the level of occupation we have in acute care beds and in ICUs. Throughout the pandemic, all resources had to be allocated to covid. We have had to put everything at the service of patients to save lives. When we do the de-escalation, visits, operating rooms, tests are recovered … but if a fourth wave comes with as much pressure as we have had, we will suspend what we are recovering now.

When can we catch up on everything that has been stopped?

When the waters go down we will see what emerges. We are working on how we can address this post-covid and how we can serve all these people. We are preparing plans to attend diagnostic tests for patients who have not been seen in person or who have not gone to their doctors out of fear. It will be necessary to recover the interventions, to return to public-private collaboration and self-concerts.

But those formulas of the self-concert and the crash plan have always been used without solving the problem of waiting lists, what other alternatives are there?

We work on more formulas. But in order to operate more, we need to have more operating rooms and staff. We are working on projects to expand hospital centers in the province to tackling a long-standing deficit.

Is there money to undertake these projects?

There is a budget. Now you have to see the priorities

Is the third hospital contemplated for the city of Alicante?

What has gone wrong in nursing homes so that so many people have died even when we have been a pandemic for a year?

People who live in nursing homes are elderly with great vulnerability. They are people who have problems of senile dementia, Alzheimer’s … diseases that do not allow them to comply with keeping the mask or respecting the movements. It is complex to protect these spaces, because there are personnel who come and go. But the number of deaths in residences in the Community has been 29% and it is one of the lowest percentages in all of Spain. It is not a justification, but rather presents the effort that has been made.

Don’t you think a change of model is necessary?

I believe that the model will be reviewed throughout Europe, because throughout Europe we have seen how residences have been the spaces that have suffered the most. It has to review the model because residences are the homes of the most fragile people and vulnerable and you have to think what model they have to receive.

Do you feel questioned within the Council?

Not at all. I have never felt questioned. The Consell has always been very supportive, it has been concerned about the evolution and how we lived the pandemic. The president was at the forefront of this health crisis, but also the vice president, who has been concerned about nursing homes and the elderly. The rest of the Consell has been attentive, also personally with me, on how I am and how things are going … and I want to thank you for that solidarity.

What weighs the most on you?

The absences. Because we have added the pain of not being able to say goodbye to them, of not having said some things to them … it is what weighs the most. We have made a titanic effort and we would have liked to save more lives.