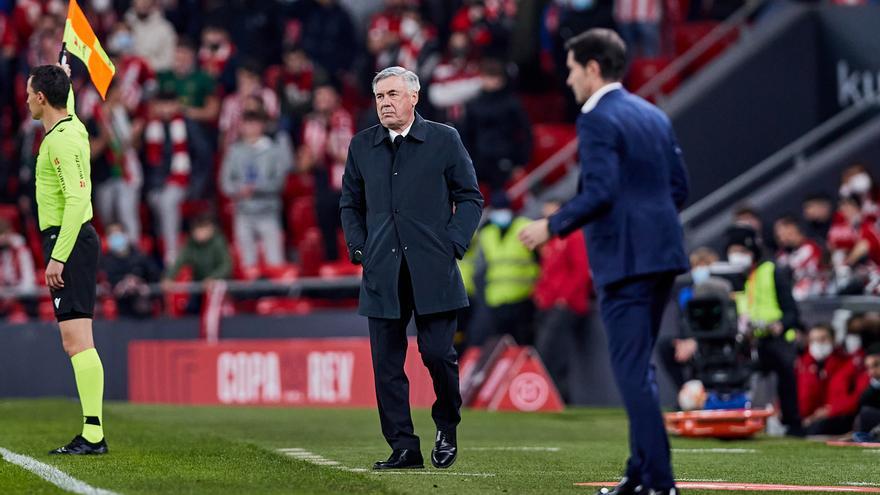 The Italian Carlo Ancelotti, manager of Real Madrid, regretted the loss of his team in the Copa del Rey quarterfinals against Athletic Club de Bilbao (1-0) by assuring that the team is “hurt”, but at the same time he trusted that this not “going to have negative consequences” in the course of the season. “We are hurt because in all competitions we have to win. We have won the Super Cup, but not this one. We have two other competitions in which we are well positioned. I don’t think this defeat will have consequences. The only thing is that this defeat makes us stronger. We knew it was going to be a difficult game”, he said at a press conference. “The worst game of the season, not at all. A complicated one because we knew it was going to be like that. We won the league game and it was difficult too. The game was even until the last minute,” he added.

Ancelotti started the three Brazilians -Casemiro, Vinicius and Rodrygo- who arrived in Madrid on Wednesday at 16:00 CET (-1 GMT) and only used two gears. “I have changed Kroos for Camavinga due to fatigue. Vinicius’s due to fatigue. I had changes left I was thinking of making changes in extra time, but unfortunately they scored in the last minute and I didn’t have time to get other players in”, he valued. Thus, Hazard, Bale and Jovic did not participate in the game: “I have nothing to say. Why do you talk about Bale, Hazard and Jovic? Why don’t you talk about Ceballos or Carvajal? If all those who have not played have to be punished… there is nothing. I have made decisions that have not involved these players, ”he replied. Regarding a Vinicius who lasted 60 minutes on the field, he declared that “he has given what he could. It is true that they have tightened it a lot, but this is what happens; It’s nothing new.”

The Real Madrid coach blamed the defeat on the difficulties his team encountered when it came to getting the ball played from behind. “We don’t have players with the quality of Karim, who helps a lot in possession. The plan has not changed. We have tried, as in the games before, to get the ball out from behind. They have squeezed us a lot. We were not clean, as if it were in previous games, and it caused us not to have clear chances”, he analyzed. But after 70 minutes we had the game under control, going to extra time could have been an advantage for us due to the high physical wear and tear that they have had”, he completed. “It didn’t come out because we played too much on the outside, we should have had the ball more on the inside. When we took the ball out wide, the pressure came”, he pointed out.

For his part, Nacho Fernández, defender of Real Madrid, assured that they were “angry” to be eliminated since they had “illusion” in being able to win an “important trophy” for them. “It makes us angry. We had illusion. It was an important trophy for us and we just have to keep fighting for what’s left”, he commented at the end of the match. “It was not one of our best games. It has been difficult for us to find occasions. We have lacked being a little finer and creating more danger for them. We have lost in a very complicated field. This is soccer. With your head held high because there is a lot left”, he analyzed about the match.

Nacho complained about scheduling a game on Thursday when in the early hours of Tuesday to Wednesday there were CONMEBOL players playing with his team, although he did not want it to be an excuse. “We have had three starting players today who have played for less than two days, with a long trip and hardly any rest. We are not going to make excuses; look forward and fight for what remains,” he said.

Berenguer: “We have been a team for 90 minutes”

Alex Berenguer, scorer of the goal that qualified Athletic Club, highlighted that the Bilbao team has been “a team for the 90 minutes” of the match. “I am very happy above all because we played a very good game. In the end it is a great victory for that, because we have been a team for 90 minutes and in the end we have managed to score a goal,” the Navarrese told DAZN after the end of the shock. “We go game by game and on Monday we have a game against Espanyol,” continued a Berenguer who believes in games like Barcelona’s in the round of 16 and this quarterfinal against Madrid is “an immense joy to see all the people applauding and screaming” in La Catedral. “We continue like this. The next game is against Espanyol and we have to continue along these lines of great games. And in the Cup we are there fighting to reach the finals, this year we are still fighting to get another final”, he congratulated.