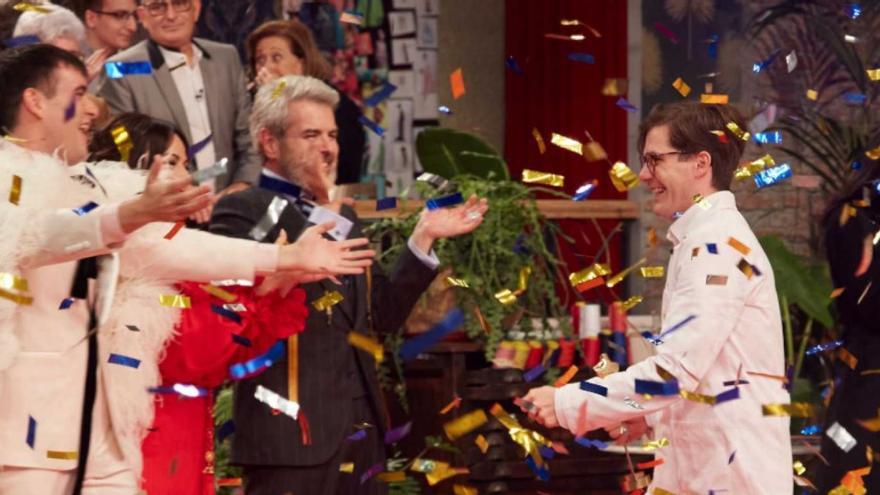 Ancor has been the winner of the fourth edition of ‘Masters of Sewing’. The Valencian apprentice was expelled in the fourth program, but managed to return after the repechage and win with a party design, a tribute to Valentino, a design with which the Spanish model Nuria Rothschild paraded at the end of the program. “It’s going to give me a glitch, I can’t believe it. Ancor, wake up, wake up,” said the winner without stopping, wrapped up in his entire family. “I have been able to experiment with everything they have put within my reach. It is worth having come,” he said. With a bittersweet feeling, Lluís said goodbye to the program congratulating his partner. “He deserved it”.

A final duel that the three members of the jury have described as “very difficult” to resolve. “We have it more difficult than ever.” “You must be very proud” of your work, the two contestants have been told.

In addition to the gold mannequin, Ancor has won a prize money of 50,000 euros and a training course of Fashion Design at the Higher Fashion Center of the Polytechnic University of Madrid.

Ancor, Gabriel, Yelimar and Lluís arrived at the workshop with the greatest enthusiasm, but without being carried away by siren songs. Gabriel confessed that, “although he would try, he did not see himself as a duelist”, perhaps thinking about the potential of his opponents. “I’m going for everything,” Ancor said with the tension typical of the moment. “I see in the award the possibility of setting up my business.” The same feeling that invaded Lluís and that perhaps was the one that united them in the final test.

Jorge Vázquez, creative director of Pertegaz, was the first guest of the program, a moment in which he remembered the great master of sewing, who designed the wedding dress of Queen Letizia.

The first test consisted of reproducing four designs from different stages by Manuel Pertegaz, a journey through its couture from the 50s to the brand’s most recent designs. A challenge that Ancor won, thus becoming the first duelist of the night, replicating a design from the 50s.

To get second place as a duelist, Yelimar, Lluís and Gabriel had to make a wedding dress, a classic of the program.

The chosen place was the Viñuelas Castle where Rossy de Palma, the presenter Lorena Castell and the futurologist Rappel were the guests who came to help the apprentices to sew their pieces.

Rossy de Palma and Lluís made the wedding dress, created by Palomo, among threads and flowers in a series of funny jokes, which were also not lacking during the test in the duo formed between Gabriel and Rappel, who came to throw the cards to Caprile, to whom he predicted great international and national success in an upcoming project, and also to Alejandro Palomo and María Escoté. Meanwhile, Yelimar and Lorena Castel got to the emotion between threads and sewing machines, making Lorenzo Caprile’s wedding dress.

The judges recognized the work of the three apprentices. “It is being an unforgettable final,” said María Escoté, a comment that was added by Caprile and Alejandro Palomo, who did not hesitate to praise the work of the three apprentices with the wedding dresses. “I have had a lot of fun,” said Lluís at the end of the test, to which Palomo could not help commenting. “I drool. I’m sure it would take some time at the Posadas workshop to realize that this is not the original.” “I did not expect to become a duelist, even though it was what I dreamed of the most,” he said. Lluís upon learning that he would fight for the golden mannequin with Ancor.

Yelimar confessed to feeling “lucky” to have had this “wonderful experience”. An excited Caprile thanked him for his work and ability to excel “and that brave life that you had to learn from scratch.”

At the end of the test, Gabriel said he was “excited and grateful” to have reached the final, “I hoped to go earlier. I am glad to have passed through here and to be part of the family of Masters of Sewing”, said the fourth classified that he was proud of having “battled with the best” in reference to his teammates.

The second classified also has a prize and you will be able to train with the best professionals in the sector thanks to the Vogue course on Fashion Styling and Production, taught by Condé Nast College Spain in collaboration with the Carlos III University of Madrid. And, for the first time, the program has decided to also reward the third and fourth placed, who will receive from Eometric a revolutionary unisex pattern making method, created by the master pattern maker and designer Estanislao, taught in a five-day workshop format at his training center from Barcelona.