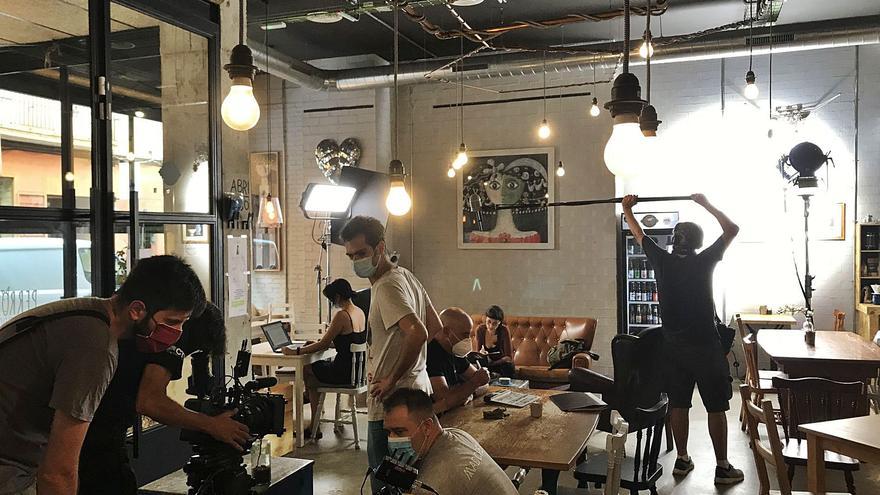 “Would it be acceptable for someone who has not committed any crime to be locked up against his will and in terrible conditions throughout his life?” Asks Álex Cuellar, director with Rafa G. Sánchez of the documentary Persona [no] Human rights, which addresses animal rights based on the case of the orangutan Sandra, who, following the action of an NGO, in 2015 was released from a zoo in Argentina by court decision after considering her as a subject of rights.

The documentary, which is in the final post-production stretch, has the backing of Dacsa Produccions from Alicante and is the result of four long years of work by the filmmakers Cuellar and Sánchez, who have shot between Alicante, València, Madrid, Burgos and different locations in the United States, Argentina, Brazil, Scotland and the Netherlands.

Professor Javier de Lucas in front of the camera.

This project «is not only an animalistic film, although it is also one, but we have tried to focus it on the concept of the non-human person, a figure that goes beyond the human and grants certain species such as the great apes -orangutans, chimpanzees, gorillas …- the right to life, liberty and not torture, “says Cuellar, linked by family ties to the NGO Proyecto Gran Simio, whose philosophy is reflected in the film.

“We play with that concept to see if an animal can be treated as a person, as a being that feels, and move that barrier of the species. It has already been done with Native Americans or blacks, who at first were considered human but not people with rights, “add the directors, based on the fact that” it is the first time in history that a non-human person is declared orangutana ».

Also Read  Horoscope today: the daily prediction and your luck for Thursday, April 1, 2021

To delve into this debate, the documentary offers arguments through interviews with Luis López Guerra, judge of the European Court of Human Rights; José María Bermúdez de Castro and Juan Luis Arsuaga, directors of the Atapuerca deposit; Pedro Pozas, from Proyecto Gran Simio, or the expert professor in human rights Javier de Lucas.

From the USA, they collect the voices of Francine Patterson (Gorilla Koko project), Mary Lee Jensvold (Washoe project) and H. Lyn White (Chantek project); from Argentina and Brazil, those related to the Sandra and Cecilia cases -a chimpanzee whose 2017 case is similar to Sandra’s-; in Holland with anti-animal experimentation activists and in Scotland with Catherine Hobaiter, specialist in communication of great apes, among others.

The ultimate goal of the documentary is to publicize these cases so that new ones are opened and “seek the formula to give them protection and avoid animal trafficking, one of the most money-moving in the world”, while showing “that the human being is not so unique. We tend to think that we come from the monkey and that we are just another race of the apes », they point out.

The documentary has the support of the Institut Valencià de Cultura and the participation of À Punt Mèdia. For this final phase of the project, the production company Dacsa will launch a crowdfunding or crowdfunding campaign in a couple of weeks, the proceeds of which will go to finish the post-production.

The production company aims to raise 6,000 euros, a small figure for the more than 125,000 euros spent on the documentary, but the initiative has a double function, not only to finalize the financing in this last process, “but also to create a little awareness on this issue, make it known and create a little community “in the fight for the rights of the great apes, says Xavier Crespo, producer and creative director of Dacsa Produccions.

The campaign will feature limited and one-time rewards and the first to sign up will have priority access to the project when the campaign launches. Among them, including the name of the patrons in the credit titles, obtaining the blu-ray of the film or attending a private virtual screening, among others.

With more than 30 years of experience, Dacsa Produccions has taken its works to festivals around the world, such as San Sebastián, the Seminci or the Havana Festival. Álex Cuellar and Rafa G. Sánchez, in turn, have documentaries such as R31 or RIP Renaix i Palpita to their credit and are co-founders of Runtun Films with Mario Núñez.