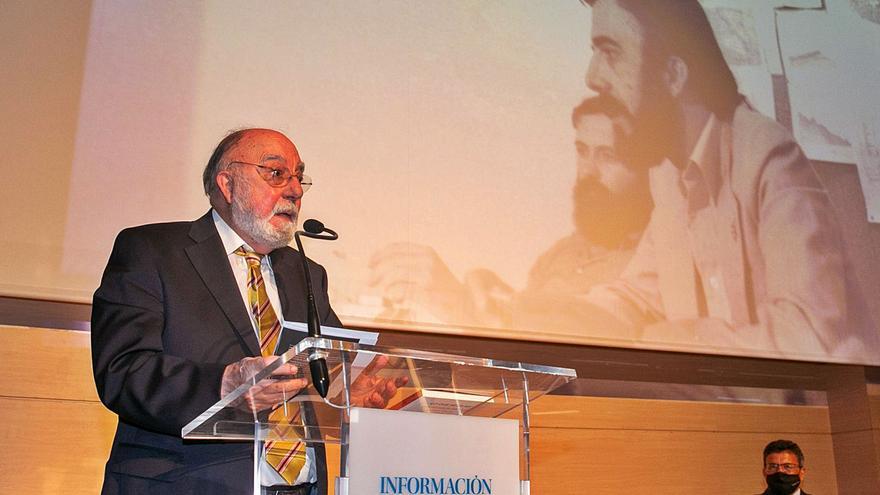 “We must revalue the Constitution, because it provides for many more agreements than those currently being reached by politicians.” That was one of the numerous and forceful sentences left yesterday by the former president of the Valencian Courts and the PSPV, Antonio García Miralles, in the course of the presentation in the INFORMATION Club of his autobiographical book «What I know about me». The act was a real event, since it summoned a wide institutional representation headed by the president of the Generalitat, Ximo Puig, or the Provincial Council, Carlos Mazón, as well as numerous former political positions, mainly socialists, among which was the former head of the Consell, Joan Lerma.

The event, which was presented by the director of the INFORMATION Club, Toni Cabot, took place in a room that, complying with the distancing measures imposed by the pandemic, fell short in the face of the avalanche of requests for assistance. “What I Know About Me” collects García Miralles’ political career in the period of time between 1959 and 1983. The embryo of the book was the opening ceremony of the exhibition “Nosaltres. 30 anys de l’Estatut d’Autonomia ”, which took place at the Museum of the University of Alicante in 2012, as a result of a commission from the Presidency of the Generalitat to the Vice-Rector’s Office for Culture, Sports and Language Policy of the UA itself.

This is how the one who at that time was director of the University’s Democracy Archive, Professor Francisco Sevillano, recalled it yesterday, who stressed that in the subsequent meal, which García Miralles attended, the possibility of editing began to be cooked the book. Thus, it was Sevillano himself who was in charge of conducting six interviews between 2013 and 2017, which he later transcribed to shape the volume that has just been edited.

The director of INFORMATION, Tomás Mayoral; the rector of the UA, Amparo Navarro; and Puig, in the row of seats.

The next to intervene was the current rector of the UA, Amparo Navarro, who defined as “success” the management that was made of this assignment, on the basis that “it allows us to know more closely how the transition was both Spanish and Valencian” . What’s more, described the book as “very Alicante”, by the protagonist himself, as well as by the people who have participated in its preparation. About García Miralles, he said that “he is a good politician, a statesman, who has always applied his philosophy of hatred for war and love for the poor.”

For his part, the general director of content for the newspaper INFORMACIÓN, Juan Ramón Gil, did not hesitate to point out that no politician from Alicante like García Miralles “has been so decisive. He contributed from the square and the palace to the recovery of our autonomy. Nobody influenced so much without having a budget». In addition, he highlighted the qualities that he has displayed throughout his career, such as “the fight against inequalities, the ability to listen and put oneself in the place of the other, and also the ability to observe and negotiate. It has been a political benchmark of the first order for four decades.

On the other hand, the president of the Generalitat, Ximo Puig, stressed that “Antonio is someone who has had a clear vision that democracy is first of all.” An example to follow in these moments in which, he added, “there is so much anger and resentment. In politics there must be adversaries, not enemies. He highlighted “his defense of institutionality”, and recalled that, despite having as friends to personalities such as Felipe González or Alfonso Guerra, «Always put the reason of state and country above. He has never been gregarious and made decisions beyond his affections. Puig also noted that García Miralles was one of the few Valencians “who was where the future of Spain was cooked, at the same time that he became a fundamental anchor for the self-government of the Community.”

And, after all those compliments, It was García Miralles himself who spoke. He recalled his childhood in Castalla, and when attending catechism and sharing snacks with other needy children, he became aware of inequality and began to identify with the weakest. Also from when I went up to Maigmo and admired the landscape at its feet, “which made me think that I was in a plural and diverse province.”

With Franco’s death, he added, it was clear to him that «the important thing in Spain is that there should be a lasting peace, and that that would only be possible with reconciliation. We could not get there with a storming of the Bastille, but through the pact. And that is why I worked for a democratic socialism, to fight to win an election by convincing the people. In this sense, he recalled “how lucky I was to enter the federal executive of the PSOE in 1976. We were 17 people who worked to build a democracy and make the Constitution.” And he referred to that Constitution, indicating that “it can be reformed, but it must be revalued because it provides for many more agreements than those currently being reached.”

Antonio García Miralles, with the president of the Provincial Council, Carlos Mazón.

Garcia Miralles is disenchanted with current politics. In his words, “democracy requires democrats, but just saying it is not enough. You have to be honest not only from the point of view of corruption, but also from the approach of ideas. And not attend shows as if they were signings of Messi or Cristiano, in which anyone goes from one game to another in a shameful way. For the former president of the Cortes, “we must lower the tone and respect the institutions and the adversary. It cannot be that the one who calls it the fattest wins, because that is how the Spain of the future cannot be built. Parliament should be a place to defend positions, but also to reach agreements and consensus.

The president of the Generalitat, Ximo Puig, during his speech, together with García Miralles. miguelVilaplana

Broad social and political support with many historical representatives of socialism

The presentation of the book by Antonio García Miralles became a political and social event, attended by a wide social and institutional representation, as well as a wide range of historical socialists. The president of the Generalitat, Ximo Puig, was in charge of leading a prominent delegation of the autonomous government in which the regional ministries of Health and Innovation appeared, Ana Barceló and Carolina Pascual, respectively, as well as the Minister of Finance, Vicent Soler. Also among the attendees were the president of the Provincial Council and the PPCV, Carlos Mazón, and the mayor of Alcoy and PSPV spokesman in the provincial institution, Toni Francés.

The subdelegate of the Government, Araceli Poblador, also attended; the mayor of Elda and president of the Valencian Federation of Municipalities, Rubén Alfaro; the Catalan Ombudsman, Ángel Luna; the mayor of Elche, Carlos González; and the current president of the PSPV, Juana Serna. Also the delegate of the Consell in Alicante, Antonia Moreno; former senator Ángel Franco; the regional secretary for Cooperation and Democratic Quality, Toñi Serna; the general director of Analysis and Public Policies, Ana Berenguer; the deputy Alejandro Soler and the senator José Asensi.

The representation of the University of Alicante was headed by the rector Amparo Navarro, together with the editor of the book, Professor Francisco Sevillano. There were also some businessmen among the attendees, highlighting among them the president of the Baleària shipping company, Adolfo Utor.