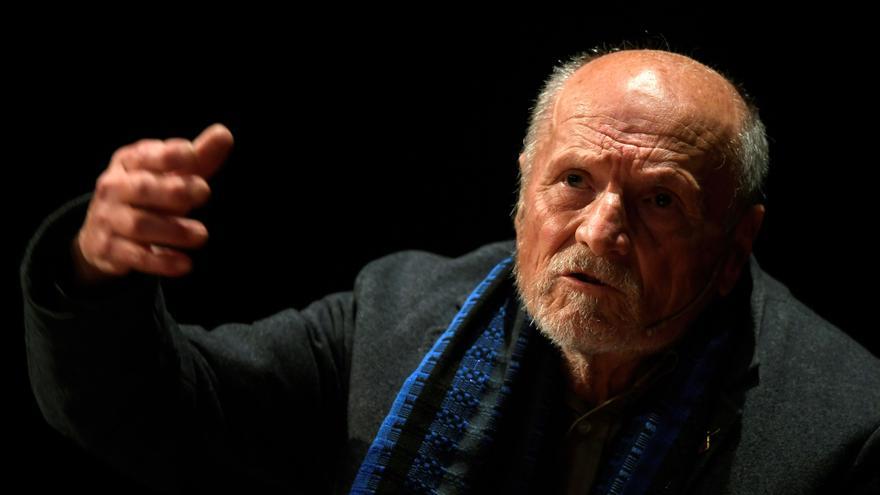 Antonio Lopez (Tomelloso, Ciudad Real, 1936) arrived this Friday at 8:20 in the afternoon in Oviedo on a train from Madrid. Clear and amused look, no councilor’s greeting or formal offer made him detach himself from his suitcase at the North Station. His first words were for his “dear friend” Félix Alonso, with whom he met Asturias, a land that would give him in 1985 – he also remembered well yesterday – the Prince of Asturias Award for the Arts and that this Saturday he invites him to chat with the artist Ricardo Mojardín at the Philharmonic Theater within the Professional Art Week program.

-How is it going? How has the pandemic affected you?

– Vaccinated for three months. And very good. Those of us who paint, those of us who write, have not been influenced. It is a very lonely job and we have hardly noticed a difference. Some less than me, those who do not need to work from nature and can do the job permanently in the studio. Those have done as always. I have worked on fewer things than I am used to. I was very involved in my house, so I have worked on the issues of my house.

–It has been a cruel disease with the old people.

– It has not touched me. In my family, thank God, we are all fine. My wife died a year ago, but it was not from this. We have been lucky and no one close to us has been infected. It has not obsessed me either. I have gone, I have come and I have gone out when I have needed it, with prudence, because in Madrid you have to go out.

–Did you not feel any anguish?

– I have not felt it. It must be that I have been an unconscious. I have continued working and doing the themes and motives that I am used to. There was a very impressive snowfall. And suddenly Madrid was an unknown city. It lasted a week, I have a garden and a lot of things got frozen. It was very striking.

I understand that there are people for whom painting is a difficulty and want to abbreviate and express it in another way. I really like to paint; And what is not right is that those people who do not need the painting attack those who do the painting

“Did you work with that?”

“No, because I didn’t know how long it would last.” Those things quickly disappear. But it was a different city and a different garden, in my case. It was a dream world, very extraordinary, very striking, it impressed me a lot. I have seen snowfalls many times, but like this, as it snowed, I had never seen the city buried in snow.

–The confinement also left images of an empty Gran Vía, very his own …

– It was not my will to make a futuristic city. It’s that cars move, people move and clouds move, but I decided that everything that moved should be left out because I didn’t want to resort to photography, in this case. I wanted to do everything natural. That is why immobile things were reflected.

–¿You get up in the morning and keep thinking about why or what for painting?

-No way. Painting is very important to me and I have known it for many years. I started at 13 years old. But what I do is not important, it is what others do, what others have done through the centuries, because art is old like man. I live among books and I can’t stop looking at those wonders that have been done. Painting, sculpture, literature, cinema when it arrived and, in general, knowledge of things. The science. Everything that makes a man more knowledgeable about things is good. I cannot doubt that. How far is it necessary for others? Well, there is a lot of difference between some people and others. There are people who have their backs to that which matters so much to others and there are people who spend their lives seeing it and who never get tired. But things are made for the people who need them. He who does not need it is not going to happen either. But there are people who need it a lot.

It is good that art has an economic value, because so much great art has been destroyed for thinking that it had no more value than the occasional one of each era that it has been a disgrace

–You talk to me about art in general …

– It makes us live better and it helps us in this difficult life. With so many people on earth now, you have to refine a lot.

– But in the specific case of painting, I suppose that the crisis …

– What do you call a crisis?

– What the theorists call the crisis of painting.

-I don’t know what it is

– The doubt about whether it is still the most valid means to get to the knowledge of the person I was talking about.

–It’s that there is a lot of difference. There are people, especially if we talk about the contemporary, who are very far from painting. With music it will happen more or less the same. There is music to be consumed by those who wish to consume it. But music, if it is not for some, it is for others. That of Bach, Handel, Purcell, Beethoven, well not. But people may like other music, because music is very important. The painting, however, there is not one that is worth for people who cannot reach those who have their difficulties. There is no easy painting. And there is an easier cinema and a more difficult one, or one that is reached in a more difficult way.

-And why is this?

–Because music can be danced and dance is necessary. If you don’t dance to a Beethoven symphony, you resort to tango or any other dance rhythm. It has that capacity, it is linked to dance and that is why it is so important for life. Art is very important, whether it looks like it or not, because it improves our lives. And if it improves one, it improves us all, because those who do not have it will find a better world thanks to art.

– I am surprised that you say that there is no easy painting.

– Painting is difficult in general, and painting that is voluntarily made easy so that everyone likes it, those who know less, is not good, it is not exemplary. You have to aspire to a high art, always, whether you understand more or less. As did Greece, Egypt, Mesopotamia, Velázquez. He who arrives, arrives. And to those who do not, something will come. But bad is bad, and it is poisonous, and you have to try not to resort to it as a solution, it is never the solution.

In those pictures of Madrid I did not want to make a futuristic city. I decided that everything that moved should be left out, because I did not want to resort to photography. That is why immobile things were reflected

“Did you paint something today?”

–I have washed the brushes. And I have painted. I have started a painting, Today is the birthday of my little grandson, whose name is Martín, and I have started painting some flowers in a state of decomposition with black water and dried flowers and I started it this morning.

-Because I wanted to do it and it was time to do it. That theme is going to last a long time because the flowers are already dry. The water is a little dark and in the middle of the container, but I am replenishing it as it decreases. And it is very interesting. I have made the same theme with those fresh flowers, with the flowers in different states depending on the time. It is a very interesting subject that I have come across over the years. And for me it is related to my age. It is something that a young person may not fall into how interesting it can be: The decomposition of something. I think that. I have arrived there, I have found it very recently: The Beauty of Destruction. Of the flower, which is something so beautiful.

– I suppose that the absence of his wife, the painter María Moreno, will weigh.

-Yes of course. But we weren’t alone then.

Also Read  Sajid Javid sounds like a lockdown skeptic, but he won't want to alienate the NHS | Tim bale

Art makes us live better and helps us in this difficult life. With so many people on Earth now, you have to refine a lot

–The controversy about what art is priced back on.

– If that helps art to be respected, it’s good; so that it is not thrown away, so that it is not destroyed, so that it is thought that what is going to be destroyed costs a lot of money. In that sense, it is good that it has an economic value. Because so much great art has been destroyed for thinking that it had no more value than the occasional one of each era that has been a disgrace. The art, in the end, will come to you the same. Because it will be on the street, in museums, in books and because, above all, it will be done. So it doesn’t seem bad to me.

– Even intangible digital art has value?

-It’s okay. Everything that is happening is fine.

– And when David Hockney paints with his iPad?

-It’s okay. He is an artist. He will know what he’s doing.

–I guess tools are not that important.

–You can even transmit feelings to others without painting, through languages ​​that I don’t use but that are there for those who need it. In the end, Hockney is still painting. There are people who have stopped painting and consider themselves to belong to the world of painting. I really like to paint, and I will continue painting. I like painting very much, both what you express with painting and the physicality of the act of painting. I find it very exciting. Everything that it contains, what it houses as an idea and the whole fact of the construction of the painting seems wonderful to me. I like very much. I understand that there are people for whom painting is a difficulty and want to abbreviate and express it in another way. What is not good is that those people who do not need the painting attack those who do the painting. That is very bad.

–Why do children paint and adults stop doing it?

– I’ve asked myself many times and I don’t know. I don’t understand it, but everyone should paint. If children do it, their parents or grandparents can do it. What comparison with professionals makes you think that you can no longer do it? Find out and encourage people to take up painting. Let them continue painting as they continue to sing or dance. Because they could do it, and broadcast things and be entertained. It is cheap entertainment that is done with anything.