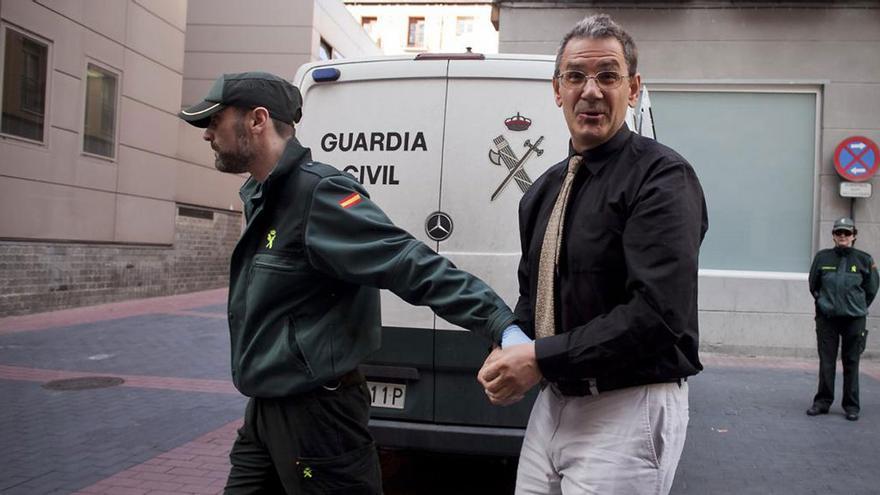 Nine years have passed since murder and subsequent dismemberment of Pilar Cebrián, 52 years old, and it is still unknown where his remains are. The crime occurred in the family home of Ricla, a municipality 40 minutes from Zaragoza by car, a distance that the murderer, her husband and father of her two children, Antonio Losilla, he did by disseminating his corpse. That was his initial confession that earned him the popular jury to find him guilty and to impose a sentence of 14 years in prison for a crime of homicide and one more year for false documents. Then he desisted and accused the Homicide Group of the Higher Police Headquarters of Aragon and the Justice in general of a plot against him.

He is currently in the Zuera penitentiary in a respect module, where, according to prison sources, he has earned the trust of his colleagues, who even help them with Spanish. Last month he asked to commute the fine he had to pay for community benefit jobs. falsify some documents with Pilar’s signature to obtain an economic benefit of his death. The Court of Zaragoza has just granted it.

The name of Pilar Cebrián is linked from the beginning to the disappearance, it was even included in the Interpol lists. This is how the case was dealt with after Losilla’s own complaint to the National Police. It was 22 days after the violent death, after receiving a call from the Mossos d’Escuadra as a result of a complaint from a cousin of hers. A time that invested in getting rid of the corpse and also in mounting an alibi. In fact, Losilla boasted that “without a body there was no crime” and made fun of José Bretón, responsible for murdering his children in Córdoba, for leaving the bones on a family farm in 2011. But Losilla made mistakes. Up to 79 indictments, he even listed Homicides. As the person in charge of the investigation, Antonio Longarón explained in his day: “there is no perfect crime because they always make mistakes”. Losilla’s first was to go to the police station and instead of pointing out that his wife had disappeared, as he later defended, the first thing he said was that they had stolen 5,000 euros and that his wife had left.

On the left, an image of Pilar Cebrián. On the left, the National Police during search tasks.

Curious were the moments when, day in and day out, Losilla asked to see the policemen who were handling his wife’s case. An attitude that surprised the agents who came to ask for advice from the psychologists of the Institute of Legal Medicine of Aragon (IMLA) to advise them. They suspected him and tracked him down until he was arrested in October 2012, six months after the investigation began. His arrest was precipitated by the discovery of a garbage bag containing the head of a person. It was about another woman, Vanesa Barrado, who was murdered by her partner that same year.

“I made small packages so as not to raise suspicion”

The entry and search in the house, crime scene, in Ricla, marked a before and after. There, while the National Police were looking at the pipes, Losilla confessed to the crime: “I went to take the jewel that he was carrying in his hand, with one hand I took it off and with the other I pushed him, and he fell and ran into the handle ”, he recalled, while emphasizing that“ he had blood in his nose, but very little, and in his ear ”.

On how he disposed of the corpse he also gave details: “As she was thin, I had no problems and without dragging her I brought her here (the house’s cellar), I waited a little longer and began to dissect her. I made small packages so that it would not arouse suspicion and the internal parts, as it has so much resemblance to that of any animal, I threw them around here, around the town ”.

A statement recorded on video that was studied by the Criminal Intelligence Unit of the National Police Force, which highlighted that Antonio Losilla “trivialized the moment he was living and that he tried to give credibility to his story.” They highlighted their position of “distancing themselves from the facts.”

The police experts also affirmed that the man said “I was scared”, reporting the emotional consequences of the result of his action, but not what it was, that it should not be other than to verify that Pilar was dead. “He resisted to pronounce aloud the result of the death, although he mentally assumed it “, the investigators concluded, while adding:” he sighs deeply and although he speaks to the court clerk, his gaze is lost, possibly remembering and visualizing the events he relates. ”

Losilla planned everything. As preparatory elements, the purchase of a chemical plunger and three cans of polyurethane foam stands out, which, according to him, were to repair the roof and to unclog the bathroom since his daughter’s hair falls out a lot, but later it was found out what he did a thorough cleaning of the garage, using this product in the drain. The Homicide Group of the National Police understood that it was there where Losilla dismembered his wife and where later the Scientific Police found blood in the pipes that matched the genetic profile of Pilar Cebrián.

Police officers during the search for Pilar Cebrián near her home in Ricla.

After killing her, Losilla dedicated himself to flirting: “I want to meet a 45-55 year old girl,” he wrote on the Badoo network. He also gave a list of his hobbies, from the most generic, such as sports, travel, books, nature and being happy, to more precise ones, such as Telepizza, the Rolling Stones, Eros Ramazzoti and having coffee with friends. When it came to giving a closer portrait of himself, he defined himself as “sincere, affable and affectionate”, but he did not hide that he considers himself a “bad lover”. As for the ideal companion, he asked for a person “outgoing, affectionate, affable and a good conversationalist.”

The psychologists of the Institute of Legal Medicine of Aragon (IMLA) studied the emails and conversations of the accused, defining Losilla as a “narcissistic”, “dominant” person with “psychopathic traits”. Characteristics that, if added to his “macho” character and the discovery of an infidelity on the part of the victim, “were a Molotov cocktail with a very high risk of a case of gender violence.” They were also struck by the fact that Losilla laughed when he stated that “if there is no body, there is no crime.” “That laugh is incongruous with the content and that has a component of hiding the real emotion,” they highlighted.

They searched for Pilar in Losilla’s brain

Where is Pilar? It is the eternal question in this case. The thorn that the Homicide Group still has nailed and that they managed not only to put Losilla on the bench, but also that he was convicted of murder despite not having a body. All this thanks to strong evidence.

To find the woman’s whereabouts, they even entered the brain of the accused. They performed the P-300 neurological test (the truth test), which would later be performed on Miguel Carcaño to try to find the remains of Marta del Castillo in Seville or to former GRAPO member, Fernando Silva Sande, to search for the body of the businessman from Zaragoza Publio Cordón.

The results of the P-300 neurological test (the truth test) performed on Losilla activated a tracking device in which even the Army intervened.

The results of that test activated a tracking device in which even the Army intervened, but nothing was found of Pilar. Not in an old snowfield near Ricla’s house where the crime was committed, nor on the AVE tracks. Both sites were in Losilla’s memory.

He was also sought out in the Mularroya reservoir works, in Morata de Jalón, near Ricla. The National Police believed that these works in the area could be an ideal place to hide a body that would be difficult to recover. For this, they based themselves on the different positions of Losilla’s mobile phone and took into account that it was a totally different area from the usual areas of the murderer’s daily tasks.

This led to the Zaragoza Court condemning him for a crime against moral integrity for the damage caused to the children by not being able to bury their mother. An achievement achieved by the attorneys for the prosecution, Soraya Laborda and Laura Vela, which would have created jurisprudence, although the Supreme Court later overthrew it.

In spite of everything, without a body there is a crime. Ask Losilla, the National Police and forensics.