Gaza’s Shifa Hospital, the main health center in the Palestinian Strip, has had to deal with worse emergencies. On Monday, the doctor on duty in the emergency unit, Mohamed Hasuna, recalled the incessant avalanches of wounded in the 2014 war and the waves of protesters with gunshot wounds during the 2018 and 2019 protests on the Israeli border. hopelessly, now we have been able to save many limbs ”, explains this 31-year-old urology specialist, seasoned like few others in emergency care. “We had peaks of 30 to 50 admissions in an hour, but we were able to cope with them thanks to a proven screening system. Almost all of them had been rescued after spending hours among the rubble with bruises, cuts and fractures ”, he details with professional aplomb.

With the start of a regional tour of the Middle East by US Secretary of State Antony Blinken on Tuesday, diplomacy is trying to strengthen the ceasefire between Israel and Hamas, in force since Friday, after 11 days of large-scale hostilities. .

Hours before Blinken’s arrival in Jerusalem, two people, including an Israeli soldier, were stabbed by a 17-year-old Palestinian, who was later shot dead by Israeli security forces, France Presse reported.

The balance of the largest war escalation in the last seven years rises to 253 dead, including 66 children, in Gaza. Among the nearly 2,000 injured, according to available data from the Palestinian Ministry of Health, 22% have minor injuries, 75% serious and 3% very serious. 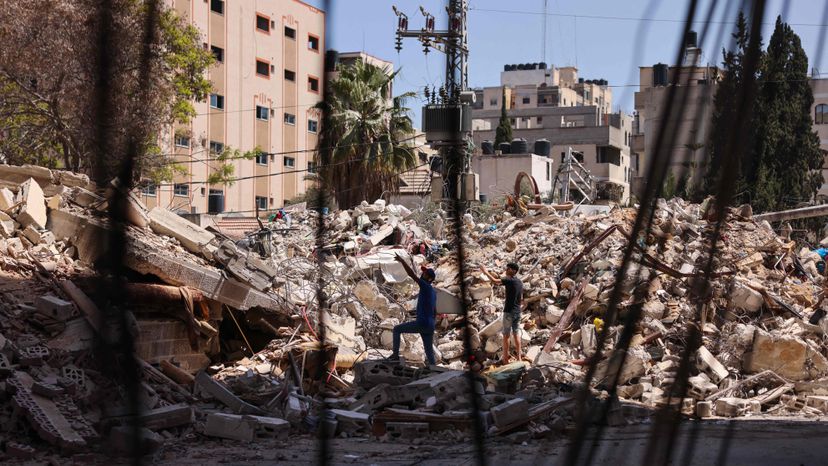 On video, the figures for the destruction of Gaza.MOHAMMED ABED / AFP / VÍDEO: REUTERS-QUALITY

Among the latter is Mohamed Uwaba, a 30-year-old civil engineer who was on his way to his office, in the north of the Gazati capital, on the 12th when an Israeli aviation missile exploded in the middle of the street. “He has lost his sight in his right eye and has a splinter lodged in his left,” his relatives say in a room at the Shifa hospital. “Doctors still have to decide if they can operate and in how many phases,” they review before the sedated Uwaba, father of five children.

The Gaza health complex seems quieter than usual after the end of the fourth armed conflict in Gaza since 2008. Clowns and volunteers from the NGO La Sonrisa del Paciente deliver clothes and toys to hospitalized children. “He hasn’t even looked at them,” Rashid Bahtiti, 34, observes with concern his daughter Farah, five, on the trauma ward of the hospital.

“He has a multiple fracture in his left leg and a simple fracture in his right, as well as his left arm. Her body is full of shrapnel wounds and she has lost part of the intestinal mass ”, says the father the medical part of the little girl in a room shared with three other patients, and in which curtains safeguard the privacy of Farah’s suffering.

“He went to the grocery store across the street for a moment to buy some sweets on the first day of Eid el Fitr (May 13, after the end of Ramadan), when an aviation missile destroyed a car that was driving around there. The explosion hit him full, ”he explains while other family members try to get the girl’s attention.

“Hello! How are you? ”, They ask her in Arabic, but she continues absorbed with lost eyes without even paying attention to the photo of her mother – who has been left in the care of her three brothers – on the screen of a mobile phone. “She has not spoken since the attack,” says Rashid Bahtiti, who has been told by doctors that the little girl will have to undergo chain surgeries.

A similar ordeal awaits in the operating room for Yibril Drimil, 32, father of two, with both legs broken in a bombing that hit districts in eastern Gaza on the 18th. They are of no use to him ”, speaks on his behalf his brother Amed, 28, who has barely left his side.

Conditions for the entry of humanitarian aid

Israel reopened the border crossings with the Gaza Strip on Monday, but only to allow the entry of foreign aid workers and journalists, after opening them briefly last Friday after the ceasefire took effect. Israeli Defense Minister Benny Gantz has warned that only “basic humanitarian aid” will be allowed to reach the enclave from international institutions and foreign cooperation.

Gantz has advanced that he will establish conditions to allow the entry of humanitarian aid to the Strip. The main one is the release of Israeli citizens Avera Mengistu (of Ethiopian origin) and Hisham al Sayed (Bedouin), held in Gaza after having voluntarily entered Palestinian territory in 2014 and 2015, respectively. It also demands the return of the remains of two Israeli soldiers killed in 2014. In previous negotiations, Hamas had demanded in exchange the release of a large number of Palestinian prisoners detained in Israel.