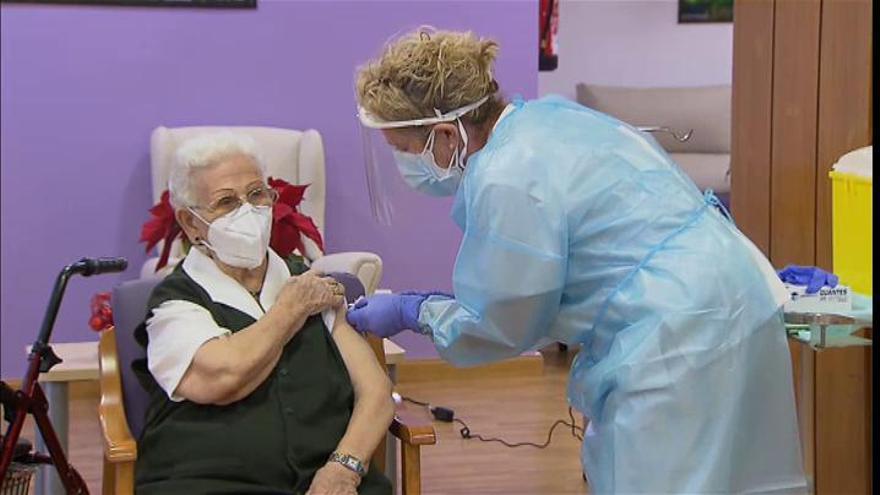 Araceli Rosario Hidalgo, intern at the Los Olmos de Guadalajara nursing home since 2013 and born in 1924, it has been the first person to receive the vaccine against Covid-19 in Spain at 9:00 am.

A few minutes later the vaccine has been administered to Mónica Tapias, born 1972, nursing assistant care technician (TCAE) who has been working at said center for ten years.

Araceli has a daughter and a son, four grandchildren and a great-grandson and is originally from Guadix (Granada), but has been registered in Guadalajara for 25 years, and Mónica is a native of Guadalajara.

“Very nervous” said Araceli, who has crossed himself before receiving the prick before the television cameras.

After Monica has received the vaccine. It has recognized that it was “a pride” to be the first health to receive it and regretted that all the people who have died during the pandemic “have not been able to get vaccinated.”

“Let’s see if this disease finally ends,” he wished the health, which will continue with its working day for the remainder of the day, and has called on the entire population to be vaccinated.

Both Araceli and Mónica have sat for a few minutes after receiving the vaccines, without suffering any type of reaction.

All autonomous communities and cities will begin to vaccinate this Sunday with the initial shipment that began to be distributed this Saturday from the Guadalajara warehouse where the first vials arrived from Belgium.

As of this Monday, an average of 350,000 doses will be sent every week to the autonomous communities. And, in total, in the next twelve weeks, Spain will receive 4,591,275 doses of this vaccine from Pfizer with which it will be able to immunize 2,295,638 people.

“Let’s see if this virus goes away”

Thus, Araceli has been very nervous about the media expectation, but “very happy” and confident that together “the virus will go away.”

The resident of Los Olmos has crossed himself and has received the longed-for and first puncture in Spain from the hands of a nurse.

“Very good, thank you very much”, were his first words after receiving the dose and ensuring that he did not feel any discomfort to a very small group of journalists authorized to record and photograph the moment.

For her part, Monica has encouraged the population to receive her. “Let the majority get vaccinated, there are many people who have not been able to arrive on time“.

The Ministry of Health has detailed in a statement that Araceli Rosario Hidalgo resides in the Los Olmos senior center since 2013 and that Mónica Tapias has been working in this public residence for ten years.