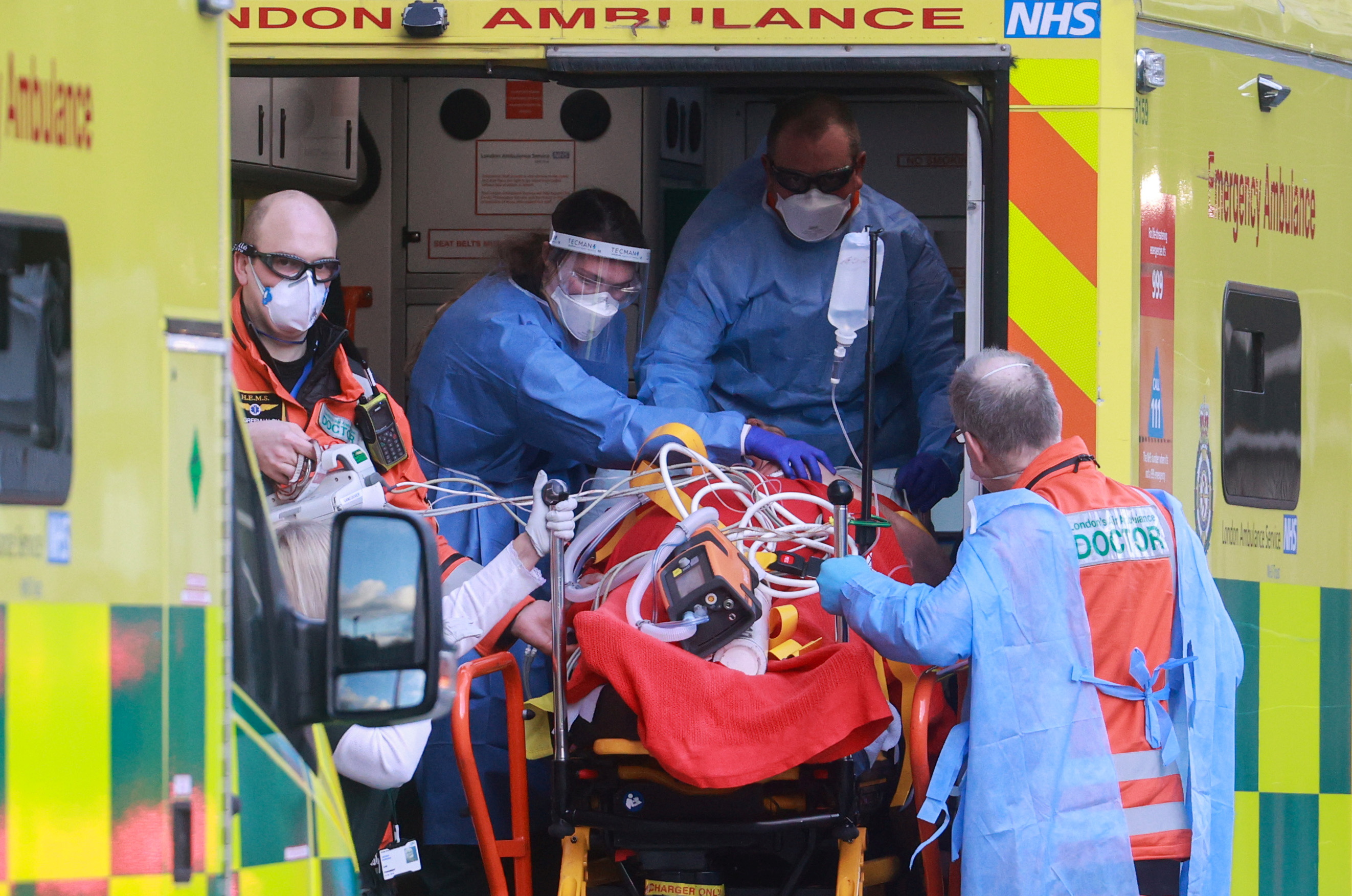 Araceli Rosario Hidalgo, 96, the oldest resident of the Los Olmos nursing home, in Guadalajara, is the first to be vaccinated against covid-19 in Spain. “Let’s see if we can get the virus to go away,” he said minutes later. With her and Mónica Tapias, 48, a worker at the center, the largest immunization campaign in Spain started at 9:05 this Sunday. Of the 70 seniors living in the residence, the only fully public one in the city, about 60 will receive the first dose of the drug from Pfizer and BioNTech today.

With a walker, and a short-sleeved blouse under a navy blue jacket, Araceli has arrived at the area prepared in the residence for the vaccination. He crossed himself while waiting for nurse Carmen Carboné to prepare the injection. “It is a puncture that you will not notice. Let me know if you notice any itching or stinging ”, the health service has warned him before the cameras of TVE, the only channel authorized to broadcast the vaccination. “It is done. You have been the first in Spain ”. “Thank God,” answered the old woman, born in Guadix (Granada) and living in Los Olmos since 2013. Afterwards, she sat in an armchair a few meters away to wait for adverse effects. “I am very well, I have been very serene,” he later recounted in a telephone conversation with this newspaper, helped by Tapias. “Of course it is important to get vaccinated, I was very excited, it impressed me, I thought ‘why me’, but everything is very good,” he says.

Araceli relates that she has always been a housewife, and that she moved many years ago to Azuqueca de Henares (Guadalajara), where she has “made life”. “I am here in the residence so comfortable and so calm,” he says. “We do gymnastics, sports”, he describes with a laugh, “I move as much as I can, I like to do things. I do everything, gymnastics, watch TV, and if not, I crochet, I’m fine, I have good eyes ”. The only thing he misses is his family. “I have two children, I haven’t seen them for months, and four grandchildren and a great-granddaughter, who all live in Madrid. I’m looking forward to seeing you, ”he says.

After Araceli, it was the turn of Mónica Tapias, a nursing assistant who has been working in the residence for 10 years. In a white uniform and a cheerful blue and yellow sanitary cap, she has sat down and acknowledged being nervous. “You can see a slight discomfort when entering,” he described to the cameras after the puncture. “The important thing would be that we vaccinate 100%,” he says later, in a telephone conversation with this newspaper. If not, “as many people as possible to try to eradicate the disease, because it has been very hard and more so now that a third wave is expected,” he warns. During the interview, this assistant explains the harshness experienced in the first months of the pandemic. “You don’t have time to recover from one death when another comes, you see families who have been devastated by the disease and it’s very sad.” Tapias is emotional when he tells that he has not been able to approach his parents, who are 73 and 79 years old, since March. “All I want is for this to happen so I can give them a kiss,” she says through tears. “I miss them, the closeness of the family, the hugs, that’s what I want to happen, return to normality.”

The two have spent about 20 minutes sitting in the room, after which they left, to the applause of several employees of the center. Araceli has gone to breakfast and Tapias to continue working. Subsequently, most residents have begun to be vaccinated, although some have not wanted to do so. “There must be consent, and whoever has not given it, is respected,” explained Marina Vadillo, director of the residence, to the journalists gathered at the door of the residence. Some have not wanted it because of “older people’s beliefs”, and two because they suffered an allergic reaction to another drug. Then it will be the turn of the approximately 120 workers. According to the Castilla La Mancha Ministry of Health, 89.23% of the elderly and 98.46% of the workforce will be vaccinated today. Within 21 days, they should receive the second dose, and a week later, the vaccine will reach its maximum effectiveness.

“Araceli has behaved phenomenally,” Carmen Carboné, 60, the nurse who has given the first vaccine against the coronavirus in Spain, tells this newspaper. “It was very exciting when they brought us the vials and we have seen them so small and so precious,” says the health company, who has worked in the occupational risk prevention service of the Guadalajara University Hospital for 30 years. “I was thinking about the amount of life in that vial and all the problems that they can solve for us in the coming months.” Those vaccinated are “very calm and very excited, with the hope of being able to return to normality.” On Wednesday they asked her if she wanted to be in charge of administering the first injections, something she didn’t expect. Carboné, who lived the first wave “with great anguish”, encourages people to get vaccinated. “It is important that no one is afraid, it is one more vaccine.” Those who have passed through his hands during the morning “have not even noticed the puncture,” he says. “The vaccines are very advanced, they deserve all the confidence.”

The director of Los Olmos has said that none of the first two vaccinated had passed the covid-19. “We see the beginning of the end. The residences have been the hardest hit by the pandemic, we have all done the best that we have been able and known, ”he said. During the first wave, he explained, there were two positive deaths and at least 11 more with symptoms, although it could not be confirmed with tests. Los Olmos has been without a covid case since June.

“We have had a very bad time because no one could pass here, and residents have died alone, whether they had covid or not,” confirms Tapias. “It was sad, there were older people who came to see their children every day and suddenly they couldn’t. We were there, they had our heat, but it’s not the same ”, she says. “I’ve been here for 10 years, that makes it more difficult to go through this because they are your second family, sometimes you spend more time here than at home, they appreciate us and we appreciate them,” she describes. The first vaccinated health worker says that, precisely, she has less relationship with Araceli “because she is autonomous, everything is done, she hardly has to be attended to, she is very well in the head and does not need our help. “I would like to reach his age and be like this.”

Today Araceli and Mónica represent a new hopeful stage. A day for excitement and confidence.

Spain starts vaccination against #COVID19 thanks to the strength of its SNS and thousands of professionals who will guarantee a fast, solvent and equitable process. #YoMeVacuno pic.twitter.com/yE2060YQcc

The President of the Government, Pedro Sánchez, has celebrated the first vaccinations in Spain on his Twitter account. “Today Araceli and Mónica represent a new hopeful stage. A day for excitement and confidence ”, he wrote. “Spain begins vaccination thanks to the strength of its SNS [servicio nacional de salud] and thousands of professionals who will guarantee a fast, solvent and equitable process ”. You have added the tag #YoMeVacuno, as has also done the Minister of Health, Salvador Illa, in a message on the social network. “Araceli and Mónica are the first two people to have been vaccinated in Spain. With their gesture, both women send the world a message of hope because they are already making progress in the immunization process. We are before the beginning of the end of the pandemic ”. The minister has repeated this message in a subsequent press conference, in which he has asked “not to lower our guard” because the data on infections are “worrisome”.

Around 8:30 a.m., 450 doses of the vaccine had left the logistics center of the American pharmaceutical company in an industrial park eight minutes from the residence. After the first injections administered today in a symbolic way in all the autonomous communities, each Ministry of Health will receive those that the central government has designated weekly, a number proportional to the population that it has in the first priority group designated in the vaccination plan (not the total): people in residences, their caregivers, health workers and large dependents. In all, nearly 2.3 million people are expected to be vaccinated before spring.