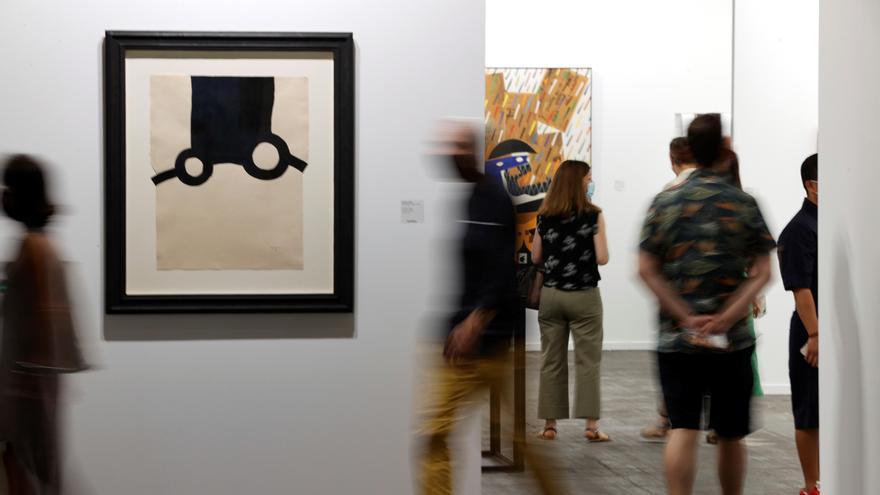 ARCO Today closes its most difficult edition, that of the pandemic, held in the middle of the fifth wave and with only half of the galleries. Despite this, the organization is satisfied with its development and the galleries have sold above expectations.

Maribel López, the director of the fair, declared today “very satisfied” and proud of the development of ARCO. The event, which has been taking place since last Wednesday in Madrid, has served to reactivate the art market and to “Break the dynamics of pessimism” that has dragged on the sector since the pandemic began.

“We don’t know when this tremendous situation is going to end, but while we have to figure out how to work with it and this has been a very good exercise”, has said.

The Madrid Contemporary Art Fair ARCO its architecture has radically changed due to the health crisis: the corridors are wider, the capacity has been reduced by half and the air in pavilions 7 and 9 is renewed every three hours.

It has also been smaller, only 130 galleries have participated, a little more than half than in 2020. The 250 collectors to whom the fair invites each year have not failed despite the bad image that the figures are showing of Spain in the tourism.

There is no general public attendance data yet -Yesterday and today, but they are expected to be “much lower” than in other years due to the reduced capacity and holidays.

The most important thing is that the galleries, which mostly they started the fair with a strong sense of uncertainty due to the change of dates -from February to summer-, they have exceeded their expectations.

“There are galleries that have sold more than ever and others little,” he explains, but they are all pleasantly surprised. ”

Mercedes Ros, from the Marlborough Gallery, one of the heaviest weights on the scene, certifies these sensations. They have exceeded my expectations, although sales have been different, he explains to Efe: “We have sold in another way, sales have been more distributed.”

The first day the gallery sold the most expensive piece on the stand, a Juan Genovés for 215,000 euros. The rest of the sales have been distributed.

Just as happy Elvira Mignoni from the Elvira González gallery, another of the veterans, declared herself.

“The fair has been very well organized and has certainly exceeded our expectations,” he says. He thought that July was going to be a month that did not accompany the celebration of the fair, as he relates, both Spanish and foreign collectors have come.

Minimum Space, one of the most important galleries in pavilion 9, has noticed an increase in new buyers and collectors.

“We are happy, the fair has been a miracle. We have gotten new clients and sold to institutions. It is not our best ARCO, but it is certainly not the worst ”, Luis Valverde and José Martínez, owners of the gallery, explained to Efe.

This year ARCO had one more day for professionals and one less day for the general public, which has obviously been less crowded than in previous years.

The fair had fewer exhibitors and this has been something that collectors have appreciated so much, who have been able to visit the fair with more tranquility, like the gallery owners.

Will the fair incorporate any of the changes from this unusual edition? “There are decisions that we must make, but it will be later. It depends on many things, the size of ARCO responds to your demand ”, declared López.

The director of the fair highlights the importance of the general public sessions at ARCO. “There are people who are beginning to love art here, that’s why we wanted there to be an audience this year too “, has pointed out.

The organization of this edition has been “An exercise in flexibility so radical that now we can imagine anything”, says its director, who is aware that many of the solutions provided to this edition have been highly applauded, and now what has to be done is “imagine the future fair”.

The next edition of ARCO will be held in February 2022, in just six months, and if everything is in favor, it will be the edition in which the fair will celebrate its 40th anniversary, which should have been celebrated this year, but which has been postponed due to the situation.