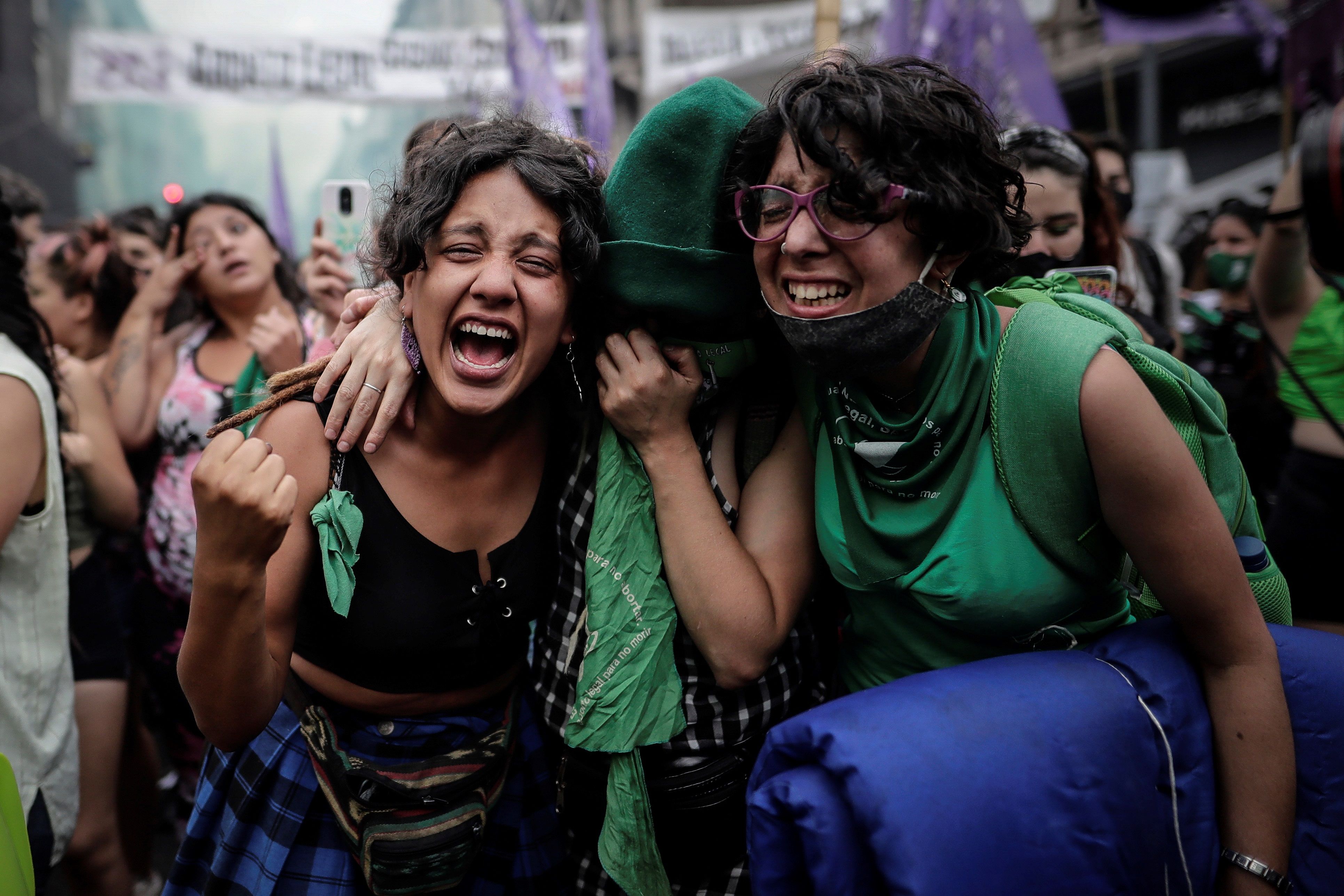 “Legal abortion in the hospital.” After accompanying the legislative debate in the streets for 20 hours, the green tide erupted in applause, chants and cheers upon learning of the result of the Chamber of Deputies: 131 votes in favor of the project of legal interruption of pregnancy, 117 against and six abstentions. A wider difference than two years ago, when it was approved by 129 votes in favor and 125 against. The last obstacle is missing, the Senate, which will have the final say.

PHOTO GALLERY: The green tide for legal abortion in Argentina

The date chosen for the debate was highly symbolic. December 10, International Human Rights Day. It was also the first anniversary of Alberto Fernández as president, the only Argentine president in office who has supported the legalization of abortion. The deputies began to debate around eleven in the morning in a highly polarized session while thousands of people followed their interventions through giant screens in a square divided in two by fences: on one side, the green tide in favor of legalization abortion. On the other, the celestial ones that reject it.

The norm approved by the Chamber of Deputies regulates free abortion up to the 14th week of gestation. And it establishes a maximum period of 10 days between the request for the interruption of the pregnancy and it is carried out.

“Nobody promotes abortion, women do not want to reach that situation, much less abortion is used as a contraceptive method. But abortions happen for multiple reasons. Resolving this issue in favor of the women of the town implies that all have access to a safe abortion, it is a problem of public health and social justice ”, defended the official project the deputy Juan Carlos Alderete, of the governing Frente de Todos, near the two o’cloc after midnight.

Since 1921, in Argentina abortion has been a crime punishable by up to four years in prison, except in the case of rape or risk to the life of the mother. Even so, each year between 371,965 and 522,000 abortions are performed in Argentina, according to a Human Rights Watch report, and 39,000 Argentine women have to be hospitalized for complications derived from them. In 2018, the Chamber of Deputies approved a project for the voluntary termination of pregnancy, but the Senate rejected it. Unlike then, the initiative has been promoted this time by the Government and has the support of the President.

“For 100 years, legislators became inquisitors and we did a moral scrutiny. We ask the woman who comes to have an abortion if she had consent or not when having sex. That was already the law in 1921. Today we are going to stop being the men of 1921. We are going to reset ourselves to 2020, ”proclaimed opposition deputy Waldo Wolff. “We are crossing the last fence for full legal recognition of women’s autonomy,” added her colleague Silvia Lospennato.

Since Argentina regained democracy in 1983, up to the present, more than 3,000 women have died from abortions in Argentina. One of them was the grandmother of Deputy Alicia Aparicio, who remembered her through tears during her speech: “I owed you Grandma, for you, for all those who lost their lives and for all the mothers, grandmothers, great-grandmothers, great-great-grandmothers, and so until the end of time. So, I ask: education to decide, contraceptives to avoid abortion, legal, safe and free abortion to avoid dying. Let it be law ”.

With religious and political arguments, the legislators against legalization warned that it is an unconstitutional law and that if abortion is approved it will become another contraceptive method. Many also argued that it is not the right time due to the covid-19 pandemic and the economic crisis that the country is going through. “I want to defend those who in all this situation have no voice, do not have the possibility to defend themselves, who is the unborn child,” said opposition deputy Federico Angelini. “With what face are we going to be scared when a 15-year-old boy kills someone for a bicycle if the leadership message is that life is relative, that in the name of freedom one can dispose of life to be born, by the way, life more vulnerable ”, added the legislator Graciela Camaño almost at the end of the debate.

Outside the enclosure, on the celestial side, there were prayer chains, chants and shouts against abortion. “Life is not debated,” reads a banner. “Adopt, do not abort”, can be seen on several posters. Cristina wears one of them. “Life begins at conception and you have to defend it. Argentina already voted two years ago and voted in favor of life, Argentina is heavenly and will show it again this time, ”says this 37-year-old woman, who is mobilizing with her husband.

“Not one more death from clandestine abortion” can be read on a giant banner on the green side. “Motherhood will be desired or it will not be,” says another. “We are making history” is written on the shirts of some militants who spent the night up, singing and dancing at a large street party. Others slept for a few hours and woke up at dawn to a brief drizzle. They all stood up to hear the vote.

“Being here is a collective hug because this was a very tough year for feminism,” commented María Cristal, a primary school teacher, who came to the plaza with her teenage daughter in the middle of the afternoon. “There was a great setback for women, who were the ones who lost the most sources of labor [trabajo] and those who kept it had, we had, to adapt to telework and make it compatible with caring for the shadows and from grandparents and grandmothers, helping with schoolwork, cleaning the house … We need to close the year with a good one, winning the right to legal, safe and free abortion ”, he predicted. “We have had the same law for 100 years and women never stopped aborting. The debate is not abortion yes or abortion no, it is legal abortion or clandestine abortion. The State has a historic debt with us and it has to fulfill it, ”demands 16-year-old Marina.

Feminism hopes that government support will tip the balance in favor of legalizing abortion and help spread the debate to other Latin American countries. The numbers in the upper house seem tighter than in 2018, but no one is taking victory for granted.