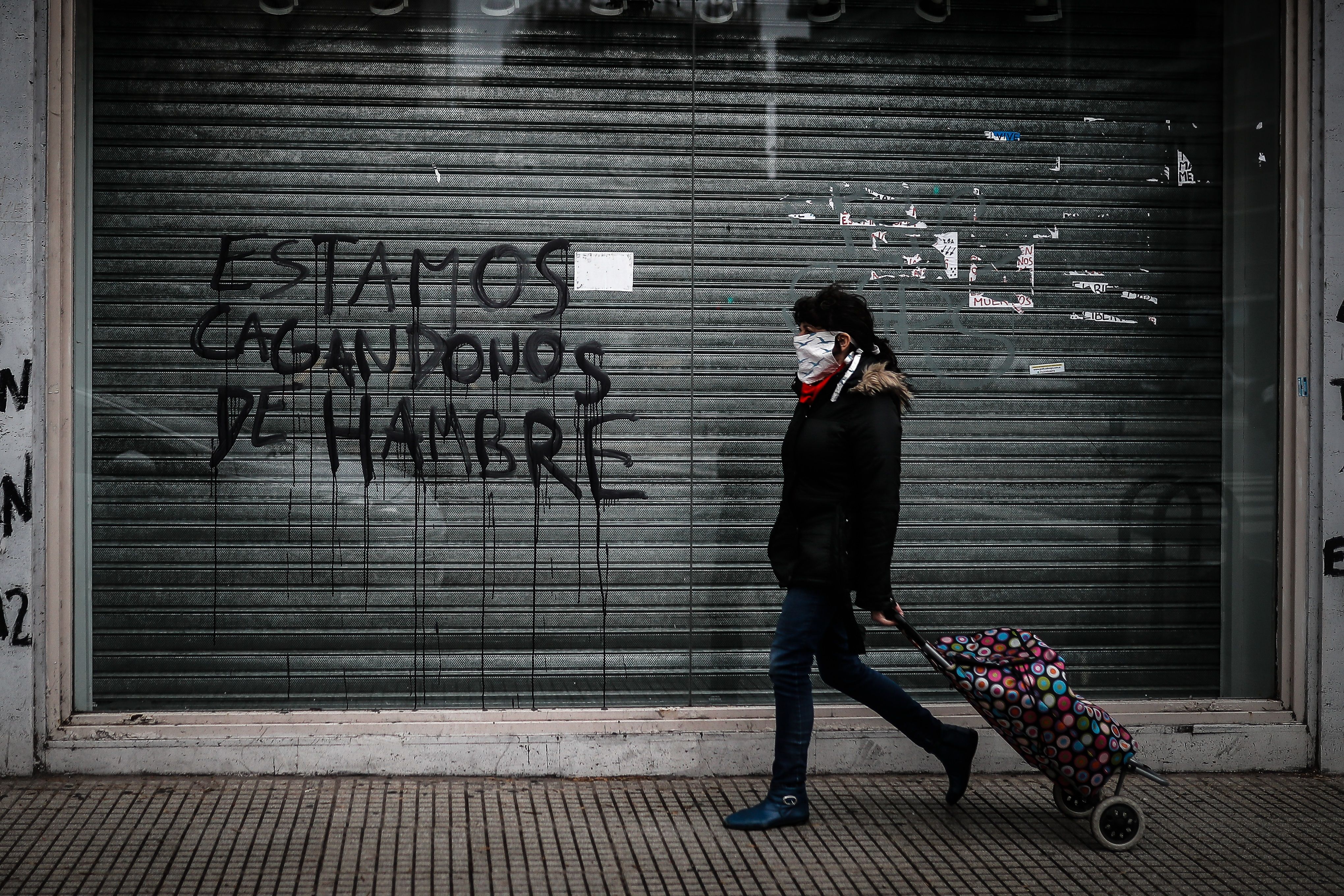 The wire is the great Argentine resource. If a chair breaks, we tie it with wire. Problems with the cistern? We put a wire. Roofs, traffic signs, doors, posters or motors work thanks to whoever had the idea to put a wire there. “Tie with wire” is a very Argentine metaphor. It means “get out of trouble without much effort.” The blessing of Creole ingenuity. Also his curse. “Tie with wire” is summed up in a more forceful word: botched.

The combination of a pandemic with almost 80,000 deaths, so far, slow vaccination and accusations of corruption or inoperation, loss of image of the Government due to its comings and goings, rising unemployment, high inflation, factories at half gas, huge public and private debts and 3 million new poor in the last quarter, according to data from the Argentine Catholic University (UCA), It shows the limits of improvisation in which Argentina so often lives, whatever the government.

Recurring changes in rules, taxes, policies, organization, conditions, or simply wire. Even the President of the Republic himself responded, during an interview, with a statement to the question why there was no economic plan: “I hate you. They are never fulfilled ”.

A long line of 19 million poor people multiplied over decades today represents 42% of the Argentine population, according to the Institute of Statistics and Censuses (INDEC). Quite a blow to the high national ego. The magnifying glass turns the percentage of INDEC into a tragedy: in the belt of cities that surround the capital, the so-called suburban, half or more of the residents are poor, a number that can reach 5 million people. Out of every 10 children, 6 or 7 live in poverty. Along with them, the middle class is also walking a thin wire: 75% of families are in debt, according to data from the Central Bank.

There are losers of losers, those who no longer have a wire to hold onto. Like the 25 residents of Anfama, a mountain village in Tucumán, who walked 12 hours through the mud and in the rain to transport Flora Balderrama, 80 years old, paralyzed by the sting of a scorpion. A medical helicopter could have gone, but it was not in service. An ambulance could have gone, but the road was inaccessible. In a wooded, humid, and mountainous area, nothing was prepared for inclement weather.

They decided to make a stretcher out of branches, wrapped Flora in blankets and tied her up so she wouldn’t fall. They walked for 40 km until they finally found the ambulance. Of course, in Argentina there is no happy ending: there were no nurses or doctors. Just a driver. “Why is there never a plan to assist us if something happens to us?” one of the villagers wondered exhausted. “In Anfama there is no doctor more than once or twice a month. The school has Wi-Fi, but it is turned off for part of the day. To communicate, you have to call a base by radio and from there to a telephone, ”says Mariana Romero, a journalist who narrated the journey live.

“The decadence of the last 50 years in our country is self-inflicted. We did not know how to achieve institutional stability, with strong and consolidated political parties, or a consensual development model ”, reflects Alfonso Prat-Gay, Minister of Economy in the previous government of Mauricio Macri. “Our GDP per capita is now the same as that of 1970,” he concludes.

60% of the population thinks that the economy, their economy, will get worse in the coming months and that there is no plan for the future, according to a May survey by Management & Fit consultancy. In a study by the UADE (Universidad Argentina de la Empresa), among the first ten words to define the state of mind, only two were positive: optimism or tranquility. The rest went from bad to worse: from bad mood to anxiety, going through decay, sadness and much, much uncertainty.

“We remain anchored in the reverie of what we were,” says Fabio Quetglas, an opposition deputy and an economist specializing in development. “We cannot think long-term and the result is a country that does not have a plan to develop and intelligently manage its resources.” “Argentina has not understood the world around us for more than 40 years. After the crisis of 1929, it recovered in two or three years, before the United States. There was a plan. La Pampa was the engine of development and was integrated into the world. There was technology, ownership rules, geneticists to improve livestock, and an elite who had hit rock bottom, who needed to adapt. It lasted for decades but collapsed with the oil crisis in 1975, ”explains Quetglas.

In that year, Mr. Ávalos arrived in Buenos Aires. One of the thousands of children who migrated from the north to the city of promises. With his mother, he found a few square meters of land, built a roof and began to walk around Buenos Aires life: sometimes a job, sometimes not. Sometimes a little meat, sometimes rice. A better day, another worse day. The life of Ávalos has never been much better than that. Precarious. His son, Mariano, was born 34 years ago in that precariousness. In 1987, the prelude to the largest hyperinflation in Argentine history, at the end of the government of Raúl Alfonsín. He played ball in the 1990s, when the former president, Carlos Menem, announced that a peso was a dollar, presented a system for traveling to the stratosphere led by Argentina, and wealth grew rapidly at every corner.

Mariano Ávalos never got a nugget of that fever. For not touching him, he did not even have to go on an excursion to the Museum of Natural Sciences, because he did not even have ID. In his neighborhood, in the town of La Cava, he did not need a document, a peso was a peso and the only wealth to be seen were the trucks owned by the owners of clandestine textile workshops. When it was his turn to look for work and continue studying, the crisis of 2001 fell upon him at the age of 14. He saw five presidents on television in one week. His father out of work, he and his eight siblings, without hope. Life was going downhill.

But Argentina, as much as it sinks, recovers. This is how the first years of the new century were, with balanced accounts and a soy boom since 2003. It seemed that things were improving: he managed to document himself, study gastronomy and work in a Municipality. Now it rises, and as much as it recovers it sinks. A new economic blow, between 2015 and 2018, further impoverished Mariano. He was trained to survive and kept going. Until the pandemic hit in 2020. Then, he felt the blow like a slow-motion right hand. He was left without a job, his life has stopped. “I no longer have dreams,” says Mariano. “I want to work whatever it is, order my life.”

“The Argentine economy rebounds after each crisis but this ups and downs always leave poverty one notch higher than at the beginning of the previous cycle,” explains Prat-Gay. “That decaying inertia is broken only with a Development Program that transforms the occasional rebound into genuine growth and that banishes stagnation and volatility forever.”

Argentina has gone through inflation, debt, hyperinflation, a corralito, more inflation and bankruptcies. When she is about to fall off the cliff, a favorable wind appears that saves her. Nothing is truly fixed, but the wheel keeps rolling.

“It is like the player at a roulette wheel. After a bad night he loses his savings, sells his car and gets into a taxi, drunk, wondering when his wife and children will kick him out of the house, but then … he finds a forgotten wallet. Fresh money! He manages to hide the disaster from his family, he plays again and is ruined again, waiting to find another miracle ”, says Fabio Quetglas.

Juan Mamani feels like a loser in this casino. A 38-year-old man demonstrates at the Obelisk, the symbolic center of the country, for not having a job. “Until 2019 I was employed for 10 years in a tobacco company. They threw me and 200 more colleagues out. In my town, that factory was life. I had to come to Buenos Aires to find another job. I had plans in my town. But in Argentina you can’t plan anything ”, explains Mamani. “Not one night watching television because where I live they always cut off the power.”

Florencio Varela, where Juan lives, about 25 km from the center of Buenos Aires and 120 minutes by public transport. It is one of the poorest districts in the country. 70% of minors live in poverty. Ambulances don’t come if you get sick, the police don’t come if they rob you. Mud streets. Ranch neighborhood. “There aren’t even sewers,” Mamani clarifies.

In Argentina, a third of the population lacks sewers, a third suffers from food insecurity, 12% does not have running water, and 24% lives among garbage dumps, according to the Report Social debts in Argentina, from the Universidad Católica Argentina (UCA), which has been measuring poverty for decades. “We have become accustomed to 40% of the population living in poverty without causing outrage. It is the reflection of the inability of the ruling class of our country to find an inclusive and sustainable economic development ”, says Prat-Gay.

“We have such an ineffective state that it transforms billions of formal pesos from the public budget (75% goes to social spending) into black money. First, in cash that those who receive aid withdraw from the ATMs. And then using that blackened money in the neighborhood shops. A whole stimulus to precariousness and poverty, ”says Jorge Alvarez of IADEPP, an NGO focused on undocumented Argentines. According to a report by the Argentine Institute of Fiscal Analysis (IARAF), VAT evasion ranges from between 3,000 to 4,000 million USD. The economy in black is the great territory in which almost 20 million Argentines move

“You are not going to fix poverty by making people use their card, but at least it is a way out of informality and poverty,” says Gabriel Bizama, a United Nations consultant on financial inclusion. “It could allow access to credit to improve a home or build a business. In Argentina there is no credit or the rates are very high ”. The diagnosis is usually clear in this country. The problem is how things are done. It consumes hours of debate and discussion for decades. Of those gatherings about what to do with this country, there were many at Café La Puerto Rico.

Until recently, in his living room with infinite ceilings and marble columns, you heard that from Buenos Aires about “what we could be and in the end we didn’t.” It was founded 100 years ago, when Argentina was one of the powers of the planet. In its windows a different country is reflected. The splendid city has been filled with families in portals, malnourished children and adolescents dragging carts full of cardboard. The Café closed its doors due to the covid pandemic. His relics must be for sale, like an old advertising poster that hung on his walls: “To the Argentine champions”, commemoration of the 78 World Cup. The poster today sells for $ 5.9 in Mercado Libre, the Latin American Amazon.