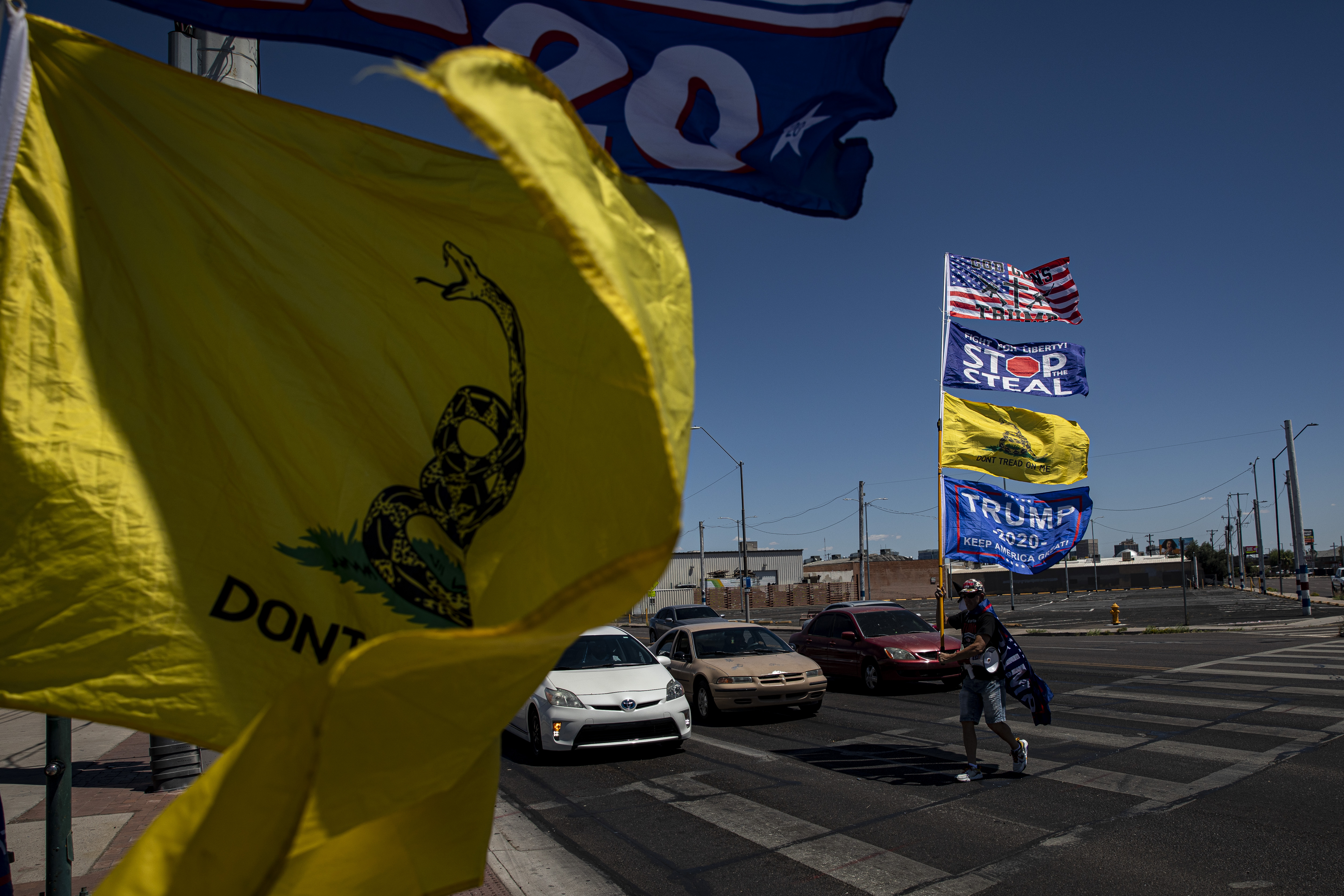 A group of patriots, as Donald Trump’s supporters call themselves, met on January 6 in downtown Phoenix, the capital of Arizona, to celebrate one year since the taking of the Capitol. For many Americans, that was a dark episode in the country’s history, but for the most ardent supporters of the former president, it was a moment of “pride” and defense of the vote against what they consider to be the fraud of 2020.

“That was a day like no other. We had an epiphany… It was a mostly peaceful protest except for the brutal beating of some protesters,” says Patrick Mcelroy, 65, who was present at the vigil in front of the local Capitol, where he was accompanied by supporters who shouted with a “Trump won” megaphone and showed “Biden is not my president” signs to another group that was celebrating a peaceful tribute in memory of those who died in the insurrection. Among the Trumpists there were also men with long weapons, defenders of the right to carry pistols or shotguns in a State that allows carrying weapons in public.

“Since that day I have been convinced that we must fight for our country, which is in danger,” says Mcelroy, originally from the city of Blythe, California, but who has lived for more than 30 years in Arizona, a state that for several years it was deeply Republican, but whose demographic changes have turned it purple, the color of the Democratic Party. Retired and owner of an electric service business, Mcelroy says he is concerned about the “invasion” on the US-Mexico border. “I feel offended that Kamala Harris [la vicepresidenta] mentioned Pearl Harbor and the Capitol protest in the same sentence. I suppose that like the border, he has not visited the memorial for the fallen in Scottsdale either, ”he says.

Mcelroy was looking forward to Trump’s first rally of 2022. The former president chose Arizona, the state of seven million people he lost to Joe Biden in the presidential election by just 10,457 votes, to start the election year in which Republicans can snatch Democrats control the House of Representatives and the Senate in the November 8 elections. Nine House districts are at stake in Arizona, five held by Democrats. The seat of Democratic senator and astronaut Mark Kelly will also be decided. The controversial Kyrsten Sinema, a centrist Democrat who has become an obstacle to Biden and his agenda, ends her term in 2025.

The former president intends to use the stage tonight in Florence, 80 kilometers southeast of the Arizona capital, to draw what will be the lines of speech for his political year: “The rigged elections of 2020, the corrupt media, the disaster of Afghanistan, inflation and the lack of respect that is shown to our nation and its leaders”, according to the Save America campaign.

For his first public appearance, Trump planned to surround himself with several members of his court. Among them, the legislator from Arizona, Paul Gosar, who caused a scandal at the end of the year when he published on social networks an animated video where he assassinated the progressive star, the parliamentarian Alexandria Ocasio-Cortez. Also from businessman Mike Lindell, a radical pillow salesman, who is a celebrity among fans of the former president.

Trump, who has already announced that his second rally will be held on January 29 in Texas, is using these events to publicly endorse his candidates heading into the midterm elections. As a candidate for governor of Arizona, he has chosen Kari Lake, a veteran presenter with 22 years of experience on the screen of the conservative network Fox News. “The newsrooms of this State and this country are full of liberal activists, which means that ordinary people do not have quality information. They don’t tell you the truth. It was unethical and immoral to stay in the media”, Lake recently told about what led him to leave journalism and jump into politics. The candidate is leading the polls among Republicans to relieve conservative Governor Doug Doucey, who cannot seek re-election after two terms.

Also Read  Investiture in Catalonia: Between the field and the sea. This is how the pact between ERC and Junts was forged to sign peace | Catalonia

Doucey, although a Republican, fell from Trump’s favor because he validated the electoral results that gave victory to Biden, the first Democrat to win the state since 1996. Despite this, legislators from his party in the local Senate ordered an audit of 2.1 million votes in Maricopa County, Arizona’s largest, hoping it would reflect the alleged robbery. There was no such. The review even yielded 99 more votes for the current president and 261 fewer for Trump. And these results were obtained despite the fact that the company in charge of making the new count had no experience in the matter and is financed by Republican groups. Far from having evaporated over time, the big lie that Biden won with a fraud has become entrenched in the minds of the Trumpists.

Lake has been criticized for her extremist statements on various issues. He has called for the jailing of Katie Hobbs, the Arizona Secretary of State who validated the 2020 results and who could become his Democratic rival to govern the state. Lake strictly follows the script that Trump wrote from the White House. He has promised that if he comes to power he will continue the construction of the border wall and will exercise a strong hand against the immigration that arrives from Mexico and Central America, which exceeded 1.7 million arrests, a figure that broke the records of illegal income on the southern border. .

“There are so many minors who are being rented or loaned to other individuals to cross. No one in America would do that. If you put your child in danger you would face criminal charges, but here we have people who lend their children to cartels and human traffickers,” explains Art del Cueto, who is part of a union of border patrol agents that sympathizes with Trump’s heavy-handed policies. Del Cueto and the 14,000 members of the group affirm that Biden has opened the doors of the country to immigrants and ask for the expansion of detention centers for what they call “an unprecedented crisis.”

Arizona is also the scene of one of the Republican reforms that make it difficult to vote. In May 2021, legislators approved a rule that allows them to purge the list of voters by mail, made up of three million people. Critics of the norm assure that it will eliminate between 100,000 and 200,000 voters in the next elections, mainly blacks and Latinos. Hispanics, who represent 24% of the state’s voters and have been key to Democratic victories in the state, would be among the main affected. In July, the conservative majority of the Supreme Court refused to annul this reform.

Activist Martin Luther King III, son of the late civil rights leader, led a protest in Phoenix on Saturday against what he sees as the suppression of a right for minorities. “Latinos are voting and getting more and more involved. Soon we will have the numbers to wrest the state from the conservatives. They’re very worried, so they don’t want them to vote,” says Dan O’Neil, who heads a progressive coalition in Arizona seeking to unseat Sen. Sinema and win the state’s first Democratic governor since 2009.