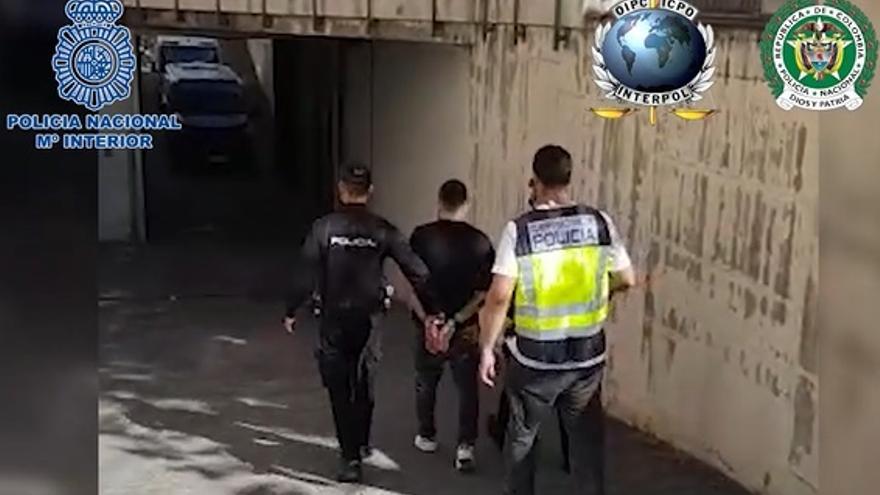 Agents of the National Police, in collaboration with the National Police of Colombia and Interpol, have arrested in Madrid an alleged hitman who is known to two international legal claims filed for various crimes of murder and homicides.

The intellectual and material authorship of more than 100 deaths, including that of his mother-in-law, who allegedly committed as revenge for a possible theft of money belonging to his organization, the General Directorate of the Police reported this Friday in a press release.

The police investigations began when the Colombian authorities issued two notifications to locate and arrest the fugitive for different crimes against life, homicides and murders, all of which were committed in his country of origin. Also He was accused of the crime of conspiracy to commit a crime, as well as to manufacture, traffic, carry or have firearms, accessories, parts or ammunition.

With this information, the police began to find his whereabouts and proceed to his arrest. Due to the extreme gravity of the events committed, their location was assigned the highest priority, taking into account, in addition, the alert that referred to their dangerousness and propensity to evasion.

In the first place, an intense work of exchange of operational information was started with the National Police of Colombia, jointly monitoring the fugitive’s environment in Colombia and Spain.

It was observed that their relatives frequently traveled between the two countries using the plane as a means of transport, for which the intercontinental monitoring of the same was coordinated.

Said supervision of the environment was complemented with the control of movements and study of patrimonial assets of all related people, which led to a series of places and addresses in the city of Madrid related to the target.

In this way, the agents managed to obtain the location of the fugitive’s affective partner, who was located next to a child, possible son of the seekeror. After articulating a surveillance device, they observed that he was in contact with what appeared to be the fugitive, who was aboard a vehicle. It was then that he was immediately arrested.

More than 15 years outside the law

He was allegedly in charge of positioning his criminal group as a warlike, organized and hierarchical organization, as well as its expansion and consolidation in Europe. In addition, it articulated large-scale drug trafficking activities in South America, Panama, the United States, Mexico and Cape Verde.

In its criminal record, With more than 15 years outside the law, he is attributed the intellectual and material authorship of more than 100 homicides. Among them, the one he perpetrated against his mother-in-law in the Colombian city of Pereira, as revenge for a possible theft of money from the organization.

Its entry into Spain took place in 2015, with the projection of setting up several branches of the organization ‘La Cordillera’ in Spain, Belgium and France. As the detainee acts as one of the main leaders of the criminal organization, his arrest destabilizes its command line and generates a significant impact on its finances.