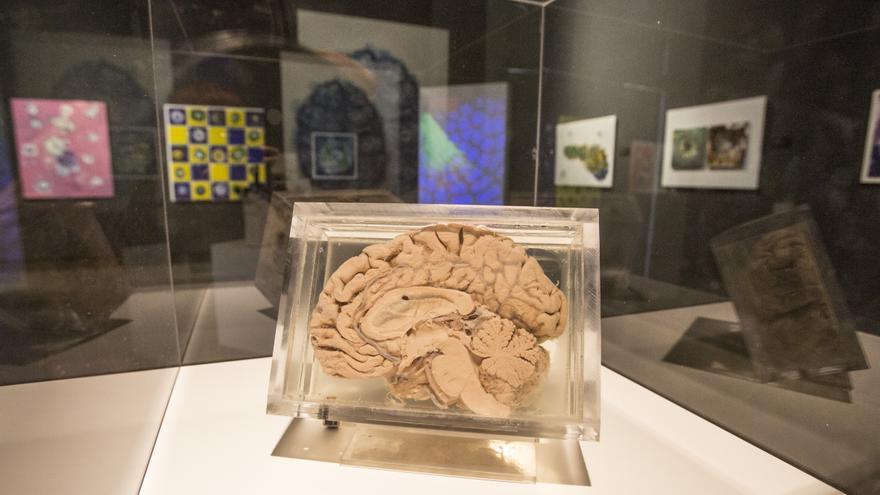 Luis Miguel Gutierrez Perez is professor of Biochemistry and Molecular Biology from Miguel Hernández University, researcher of the Institute of Neurosciences and director of the Group for the Study of Molecular Mechanisms of Neurotransmission. He is also fond of astronomy and eight years ago he made his debut in the plastic arts with his first exhibition of painting, then figurative, until in 2017 he began to fuse science and art in an abstract way. Tomorrow it opens at 12 o’clock in the Lonja of Alicante the exhibition Origins: colors and textures from the Big Bang to the Brain, where through some thirty works and other sculptural and audiovisual elements this scientist intends to tell the history of the Universe and life in a plastic way «to enjoy art and, inadvertently, understand science, “he says.

«Mine is a very strange path in painting because I had my figurative time, and the only thing that remains of that time is color, but a few years ago I saw that I needed to combine who I am, a scientist and an artist, and I capture it in contemporary works ”, highlights Luis Miguel Gutiérrez, who adds his attraction“ for that way of painting of organic abstraction and mixed technique, mixing acrylics with oils and varnishes ”.

With art he has been able to tell natural history, from the great, the macrocosm – the beginning of the Universe with the Big Bang, the galaxies, the planets, the stars … – to the smallest, the microcosm, narrating the evolution of life with the creation of the first cells to the formation of the brain, “the most complex multicellular structure, with which we wonder about our origins”, clarifies the artist, whose exhibition is part of the Brain Week organized by the Institute of Neurosciences, mixed center of the CSIC and the Miguel Hernández University.

In this exhibition, paradoxically, the grandiose macrocosm occupies the smaller format works, while the larger pieces reflect microscopic science; the formation of the Universe is reflected in darker tones and the appearance of life, in color, while the Earth is shown as a luminous sphere, since «just as from the Earth we see the Moon shining, from the Moon the Earth go with the same intensity, “says Gutiérrez.

The pictorial is complemented by natural elements that are exhibited in glass cases, from fossils, meteorites and microorganisms to a real brain of a 48-year-old donor to the Institute of Neurosciences.

Also included is a telescope owned by the scientist and a microscope from his laboratory, from which the images that researchers usually find when looking through them are projected: deep sky (nebulae, galaxies) and planetary photographs, some provided by Astroingeo and others. taken by himself, and microscopic cell images.

The Origen exhibition – “which is the one I would like to have seen when I was little”, declares the artist and scientist – was partially installed for three months at the National Museum of Natural Sciences in Madrid, a museum that never exhibits art, and it was visited by more than 70,000 people.