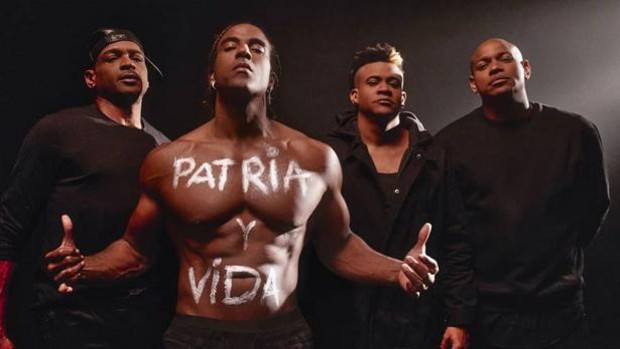 To the rejection, to the criminalization, to the arrests, to the raid on November 26 of the headquarters of the San Isidro Movement by the Cuban Government … artists from inside and outside the island, have responded with a song whose lyrics are a hymn to freedom, a poetic and at the same time heartbreaking message that calls for the end of the Cuban dictatorship. «It’s over … You, five nine [1959]I double two [2020], It’s over … Sixty years locked the domino, look ». The musical theme, “Homeland and life”, presented this Tuesday, also wants to replace the slogan wielded by the Cuban revolution for six decades: “Homeland and death.” Made by well-known artists, such as Yotuel Romero, Gente de Zona, Descemer Bueno and the island-resident rappers Maykel Osorbo and El Funky, the video clip wants to be a tribute to the San Isidro Movement that last November lit the flame of a protest, through a hunger strike for the release of rapper Denis Solís, which later triggered the birth of the group 27N. “They broke down our door, violated our temple and the world is aware that the San Isidro Movement is still in place” A movement, on November 27, lit up on the night of November 27 after the concentration of hundreds of artists, journalists and intellectuals before the Ministry of Cuban culture, which is putting the Cuban Government in check through its demands. «Kick and saucer at five hundred [500] from Havana, while at home in the casseroles they no longer have any [comida]»At a press conference broadcast on social networks on the day of the video clip’s premiere, the musicians expressed their wish that the musical production would unite Cubans. “The lie is over, the deception is over, the imprisonment is over, the torture is over, the prison is over, they are no longer as you are,” said Yotuel Romero.

This gift is for you. https://t.co/aK2vLjZsgd

Descemer Bueno pointed out that little by little people are becoming aware of what is happening in Cuba and are raising their voices. “People are already realizing what is happening and are feeling firsthand what the end of this dictatorship is going to be,” declared the composer. For his part, Alexander Delgado, a member of Gente de Zona, affirmed that this song is the feeling of many Cubans who are inside and outside of Cuba, and stressed that they are not financed by anyone, alluding to the constant accusations by the Government Cuban that those who disagree are in the service of the United States: “This is a heartfelt thing that we are doing for the people.” “No more lies / The people ask for freedom, no more doctrine / Let us no longer shout homeland or death but Homeland and Life” While, from the island, El Osorbo, a member of the MSI, who has suffered firsthand the repression of the Cuban regime, He posted on his networks that it is “a war hymn” and wrote “we are going for definitive freedom.” The musicians sent a solidarity greeting to the independent artist Luis Manuel Otero Alcántara, the San Isidro Movement (who can be seen in the video clip), 27N, El Funky, and Osorbo, with whom they established a connection from Cuba briefly, before the The regime will cut the internet, as it usually does to silence dissent, according to Diario de Cuba. In just a few hours the video clip has gone viral on social networks. “It is necessary to attract the attention of the whole world so that they put their finger on the system”, claimed Descemer Bueno during the presentation.

#Cuba Message from Yotuel & Movimiento San Isidro flies through Cuba with the lyrics of "Homeland and Life" – They launch an unpublished music video that is spreading like wildfire in Cuba and around the worldhttps://t.co/PycyclSP97https://t.co/YhNFFUaXh5@Mov_sanisidro @ 27cuba @LMOAlcantara