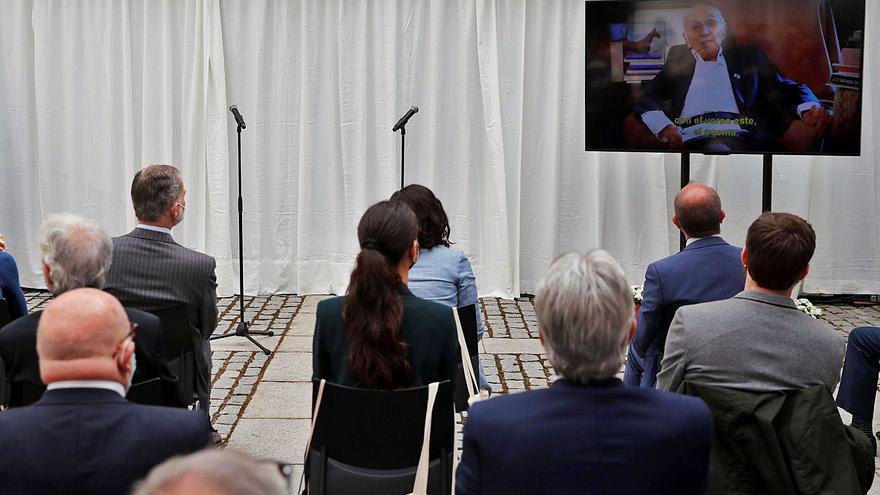 Brines, 89, one of the last living representatives of the generation of 50, and known for his defense of poetry as an exercise of tolerance, will soon receive the award at his home in Oliva (Valencia), where the Kings and the Spanish Minister of Culture will move , José Manuel Rodríguez Uribes.

The kings presided over the acts of book day celebration in Alcalá de Henares, where a video of Brines was shown in which he read with difficulty one of his poems, My summary, which, he explained, begins with a verse he wrote 20 years earlier.

«As if nothing had happened / This is my summary

and my epitaph is in it./ My nothingness speaks live /

and he looks into a mirror that does not reflect anyone.

It is the second consecutive year that this traditional ceremony cannot be held, after confinement due to the coronavirus pandemic in 2020 prevented its delivery to the winner, Joan Margarit.

On that occasion, the Kings of Spain also moved later to present the award and traveled to Barcelona to see Margarit, a Spanish poet who died last February.

“He has not been able to accompany us for health reasons although we will soon have the opportunity to visit him, in his native Oliva, with the Kings whom I will accompany with pleasure and also with pride to give him the Cervantes”, said Minister Rodríguez Uribes, who expressed his gratitude to the kings “for always being committed to culture.”

“Our Valencian, Spanish, universal poet awaits us in spring, which is his Autumn of the roses,” said the minister in reference to Brines’ verses.

The poet wanted to respond to the numerous congratulations he has received from Cervantes with a message sent along with a photograph in which an image of the manuscript of his poem The Last Journey appears, on which a red rose is deposited.

The Kings talk with the actor José Sacristán

«Life sometimes has the delicacy of flowers: its flesh is the petals with their obligatory color and the miracle is done; you get closer and how they smell. Color, aroma and shape, a living being. And that is what man receives on earth from the hand of God. From Elca, happy good book day », the poet wrote.

Upon arrival in Alcalá de Henares, the kings were received with applause and cheers from citizens. In the speech delivered at the event, the Minister of Culture recalled how it has been shown that “devastated by this cruel pandemic” reading was a consolation and the book “a faithful companion for much of the population.

“One of the few positive effects of this health, economic and social crisis that we continue to suffer is the increase in reading rates that broke records between the months of March and June of last year,” stressed Rodríguez Uribes.

The act continued with the dramatized reading of Spanish classics from the Golden Age and later Spanish actor José Sacristán read texts by Miguel Delibes and Antonio Machado, as well as the poem Estación Claridad, by Maria Elena Walsh, dedicated to the mothers of the Plaza de Mayo, among others.

The kings later visited the Biblioteca Patrimonial library at the headquarters of the Instituto Cervantes, recently inaugurated with a poetry collection of more than 7,500 volumes, accompanied by the director of the Cervantes Institute, Luis García Montero.

Brines was also in charge, through a video, of starting the Continuous Reading of Don Quixote organized by the Círculo de Bellas Artes de Madrid, which was followed by the President of the Government, Pedro Sánchez.