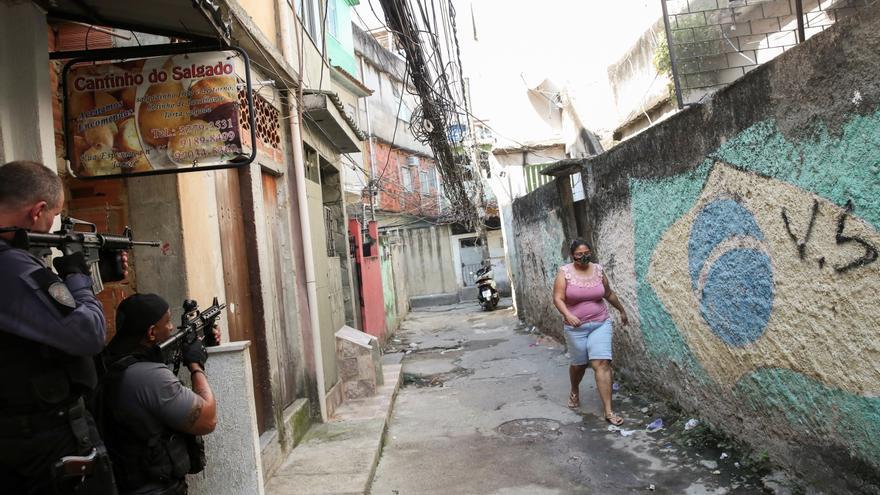 A violent police operation carried out this Thursday against a group of criminals in a favela in Rio de Janeiro left at least 25 dead in the midst of an intense shooting and at a time when this type of action is restricted by justice in the most emblematic city of Brazil.

Official data indicate that a police officer lost his life minutes after receiving a blow to the head and that 24 suspects died during the operation in the Jacarezinho slum.

Three uniformed men and two civilians were also injured, who were hit by stray bullets when they were traveling within the city subway through the area at the time of the riots.

Public security experts consulted by EFE assured that it is “the biggest massacre in the history of Rio de Janeiro”, since, in his opinion, it ended up as a “revenge operation” after the death of the uniformed man.

The number of victims this Thursday exceeds the 21 registered in August 1993 in the favela of Vigario Geral, So far the biggest massacre in this city and also caused by policemen, who on that occasion acted under the hood, in an unauthorized action to avenge the death of four uniformed men a few days earlier.

“The Civil Police, which is the one that should use intelligence and planning, was the author of this massacre by killing more than 20 people in an operation, in a disastrous action that was carried out with the aim of dismantling gangs of young people who assaulted on the trains, but that turned into a revenge operation, a killing operation, “Silvia Ramos, coordinator of the Network of Public Security Observatories.

The intense armed confrontation was lived from early hours in Jacarezinho, one of the most depressed and violent communities in Rio de Janeiro, when some 200 police officers were sent to the neighborhood to repress a gang of drug traffickers.

According to the Police, the drug gang that controls the area has been recruiting minors to carry out criminal actions.

The faction is being investigated for murders, robberies and train hijackings, among other crimes, but also for wanting to use the homes of residents of the favela for their crimes.

The authorities indicated that an intelligence work allowed them to identify 21 members of the gang, “all of them responsible for ensuring territorial control of the region with the use of firearms.”

“It was possible to characterize the association of these people with the criminal organization that dominates the region, where a typical war structure was assembled with hundreds of ‘soldiers’ equipped with rifles, pistols, grenades, bulletproof vests, camouflaged clothing and all kinds of military accessories “, reports the Police report.

A preliminary balance known by EFE indicates that in addition to the victims, ten alleged drug traffickers were arrested during the operation.

The operation of this Thursday in Rio de Janeiro once again calls into question the actions of the uniformed men during this type of attack. police raids.

Police operations were banned in Rio since June last year by the Supreme Court of Justice, after a series of alleged abuses by the agents that caused the death of at least 65 people in times of social confinement due to the pandemic.

As stipulated by the decision of the highest court, operations can only be carried out that are previously planned and announced at the Regional Public Ministry, as happened with the action of Jacarezinho.

Data from the Observatories Network reveal that deaths in this type of police raid have increased by 26.6% when passing from 75 in the first quarter of 2020 to 95 in the same period this year.

The numbers are higher if you look beyond the operations. A total of 149 people died at the hands of uniformed soldiers in January, 147 in February and 157 in March, according to data from the Institute of Public Security (ISP) of the Rio governorate.

“That is, an average of 5 deaths by police every day. This was the worst first quarter in the history of Rio de Janeiro since the ISP reported the deaths, “says the expert.

According to official data, in 2019 more than 1,800 people died at the hands of the uniformed. Last year there were more than 1,300 victims.

The tragic toll of victims in the favela also puts the racism on the mat.

According to the expert, most of the victims are young black men that, for having these characteristics, are classified as “criminals”. “It is enough to be young, black and a resident of a favela to be a suspect,” said the expert.