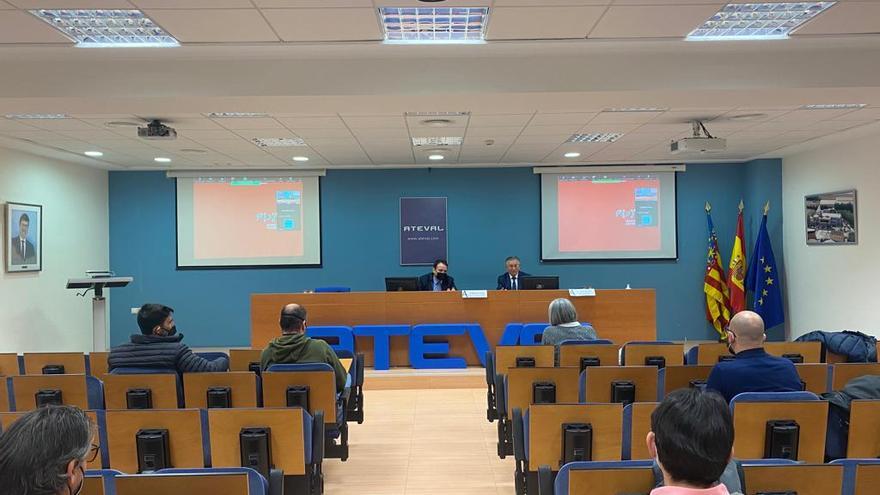 The headquarters of Ateval, Association of Textile Entrepreneurs of the Valencian Community, in Ontinyent, has hosted an information session this morning to present the new financing lines for the self-employed and small and medium-sized companies, launched this January by the Institut Valencià de Finances (IVF). The act has had the participation of Manuel Illueca, director of the IVF, and has been followed by more than forty companies in the sectorboth in person and online. Among other aspects, this aid is aimed at improving liquidity and facilitating investment projects and is included in the package of five new lines of credit, which the Valencian institute will launch during 2022, for a value of 300 million euros.

Specifically, during the day this Friday two of these new lines of financing have been detailed:

The IVF INVIERTE PYME REACT-EU FEDER subsidized line will have 180 million euros to facilitate investment projects. It is aimed at small and medium-sized companies whose headquarters are in the Valencian Community, with loans of between 1,000,000 euros and 5,000,000 euros, which may not exceed 80% of the value of the investment to be financed.

The subsidized line “IVF AFIN – PYME & SELF-EMPLOYED LIQUIDITY aimed at increasing the liquidity of companies and will have 30 million euros for working capital and investment, with non-refundable installments. Within this aid, among other actions, the expansion and renovation of the facilities, machinery and equipment, maintenance of the company’s working capital, including the hiring of labor, the acquisition of goods and services linked to the cycle of the exploitation, customer financing, among others. In this case, the beneficiary will have a financial guarantee granted by the Reciprocal Guarantee Society of the Valencian Community, AFIN-SGR, for 100% of the nominal value and ordinary interest of the loan requested from the IVF.

Also Read  Vin Doré 24K, the firm that shoots its profits with the pandemic while insulting on Twitter

During the act, the president of Ateval, José Vicente Serna, highlighted IVF’s trajectory and proactivity in promoting companies and expressed his satisfaction because these new economic aids “allow our industrial fabric cope with the economic recovery”. In this sense, he wanted to remember that “the Valencian textile sector is mostly made up of those small and medium-sized companies that more than ever need the support of the administrations to remain competitive and not be left behind”.

For his part, the director of the Institut Valencià de Finances, Manuel Illueca, took advantage of the visit to Ateval to present the operation of the IVF institution to the sector and made a positive assessment of 2021, a year during which the Institute operated with 2,836 companies with a financing granted of 321 million euros. Regarding the financing lines for 2022 presented at ATEVAL, he pointed out that “they are going to be very useful lines for the sector” and that they go directly “to support the investment processes of companies”. In this sense, he stressed that after the withdrawal of investment in recent years, now is the time to invest and encouraged companies to do so this year because “they will have significant support from the IVF.”

Finally, he recalled that the maximum period to apply for aid will be open until June 30, 2022.