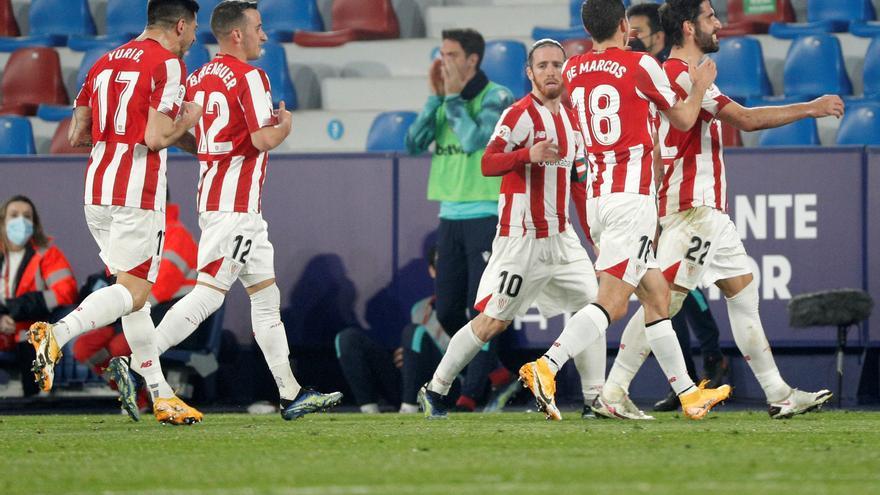 Athletic Club will face Fútbol Club Barcelona in the final of the Copa del Rey 2020/21 on April 17 at La Cartuja after eliminating Levante (1-2) this Thursday in an agonizing semifinal that was decided in extra time with a goal by Álex Berenguer, a historic event for the people of Bilbao who will fight for two drinks in less than 15 days.

This is how football has changed the pandemic, whose capricious calendar has given Athletic the license to take out the ‘barge’ twice in 15 days. And all after 35 years collecting dust. This Thursday, in a new exhibition of Marcelino’s ‘magic wand’, the ‘lions’ stormed the Ciutat de València to face two consecutive finals. The one that is pending last year, against Real Sociedad, and the one they won hard on Thursday.

The game soon offered good dynamite, after five minutes came the first warning from Raúl García, who touched the post with a volley; and after the quarter of an hour the scoreboard already registered 1-0 in a good action of the granotas. A magnificent combination down the left wing ended up at Rochina’s feet and he gave it to Roger.

The Levante gunman finished off first with his heel, but did not find a goal hopefully because the rejection fell back on his feet. The Valencian forward’s solution was the best possible, turning around and shooting at the long stick. The script was unbeatable for Paco López’s men, who tried to take over the crash in the minutes that followed.

Athletic, with a great version of Unai López and Mikel Vesga, became strong in the engine room and soon took the initiative away from their rival. What’s more, before half an hour Duarte tackled Raúl García and the referee did not hesitate to point out the maximum penalty. The Navarrese midfielder shot Aitor Fernández and restored equality to the match and the tie.

From there, and despite the ups and downs of both teams, fear was prevailing and neither of the two clubs opted to risk what they had already achieved. Closer was the local team with a play by Miramón, another of the highlights in Levante, who was about to score in his goal Yeray. The scare was great but Athletic saved the tie at halftime.

In the second round, Marcelino García Toral’s team took a step forward and was more dominating, although it is true that they abused the long displacement looking for Iñaki Williams. The striker was fed up with running and did not find the key to the ordered defense of the Blaugranas. Berengue, with his back turned, had the best chance for the ‘lions’.

Athletic was better but it did not go crazy either before the coherence of Levante, who signed the extension long before reaching the 90th minute. There were no more options in a final rush that became a carousel of changes impeding the rhythm of the game . This benefited the people from Bilbao more, who arrived fresher in overtime.

And so it was, there was an extension and Athletic introduced fresh legs, more order and some sigh, but only one in a Bardhi foul that Unai Simón cleared well. Those of Marcelino believed it as the minutes passed and their faith ended up giving the prize they had sought so much. Morcillo, who had just entered, gave the leather to Berengue and he did the rest.

His launch from outside the area seemed easy for Aitor Fernández, but Vukcevic deflected the leather and confused the Levante goal. The goal knocked down the home team, who were looking forward to their first final, but gave glory to an Athletic team that continues to amaze since the arrival of Marcelino. You can add a Cup to the Spanish Super Cup. Or two, rather.

Also Read  The water, of quality and at a good price