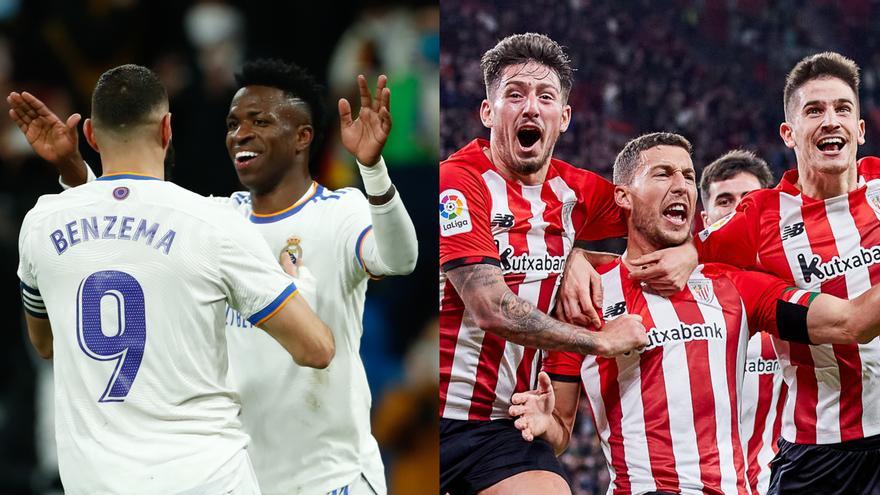 The Real Madrid faces Athletic Club this Sunday (7:30 p.m.) in the final of the Spanish Super Cup, which is played at the King Fahd stadium in Saudi Arabia, in a duel that will have as a prize the first title of the season for both and the revalidation for the Bilbao, current champions of the tournament.

Meringues and lions arrive at the appointment after having eliminated FC Barcelona and Atlético de Madrid in the semifinals. The former did it more calmly, always ahead on the scoreboard, and the rojiblancos needed an express reaction to come back and seal their presence in the final. A final that they know well from last year.

At that time, Marcelino García Toral’s team -who will lead his fourth final as Athletic coach in just one year- defeated Barça in extra time (3-2) and finished an excellent tournament, confirming the change of cycle experienced in Bilbao since the arrival of the Asturian coach. Then everyone cooled off with the two defeats in the cup finals.

This time it will be Real Madrid who will be in front. A classic of Spanish football that had not been produced for 64 years with a title in between. A long period of time that will end this Sunday in search of the eleventh Super Cup for the people of Madrid and the fourth for the Basques, who have won two in the last seven years.

Carlo Ancelotti’s team, except for the unexpected setback at Getafe at the beginning of the year, he is showing a solid line of play that has led him to lead the League without question and to qualify for the round of 16 of the ‘Champions’. To make matters worse, they have finished off Barça and Atlético as many times as they have faced each other this season. A good endorsement before facing a final to which the whites arrive hungry.

It would be Ancelotti’s first title since leaving Real Madrid in 2014, the year in which he won the Champions League, Cup and Club World Cup, but not the Super Cup. The Italian recovers David Alaba for the final, who missed the ‘semis’ due to injury, and will return to the center of the defense relegating Lucas Vázquez or Nacho to the side to the detriment of Carvajal, who has tested positive for coronavirus.

In addition, Ancelotti will have to redesign his eleven without Marco Asensio, who will not be there due to muscular problems, and he will surely opt for Rodrygo, who is always his chosen one to complete the trident ahead of Jovic or Hazard. The Brazilian has also performed well and is a good partner for Vinicius and Benzema, the great madridista duo. Between the two they add 38 goals this season and almost twenty assists.

Ancelotti will not make any further changes to his eleven, although he did not give too many clues in the press conference prior to the match. In addition, the one from Reggiolo made it clear that he is “delighted” that his team is playing against him, but he was against labels. “If we play a game to defend, it doesn’t mean that the team is just to defend. We are the team that has scored the most goals in LaLiga,” he pointed out.

Athletic wants to retain the title

For its part, Athletic Club faces the final as a reward for its good work during the season, as current champion, and after having gone through various streaks where the team has been far from good results, but not so much of his direct and passionate football. Only the goal has separated them from higher levels to date.

Also Read  Great moments in history often set the world in motion, but the pandemic has frozen it in place | Jeff sparrow

The rojiblancos have very recent league precedents against Real Madrid, the last one on December 22 in San Mamés with an away win (1-2), and the previous one on the 1st of that same month at the Bernabéu (1-0). Despite the defeat, Marcelino recalled that this will be the way, to repeat the same things that they did well in the Spanish capital to have options in the final this Sunday.

The Asturian coach has the entire squad at his disposal, although the eleven could introduce very few changes. One of them would be the inclusion of Nico Williams, the hero against Atlético, although his trick as a shock was decisive last Thursday. At the point of attack, if there are no news, Sancet will accompany the oldest of the Williams.

Athletic celebrated its last title a year ago, but Real Madrid hasn’t done it since July 2020, when he won the League of confinement. A wound that is more of an obligation for the whites than for their rival in this strange event that takes place 7,000 kilometers from Spain, depriving the fans of both clubs of celebrating a new conquest.