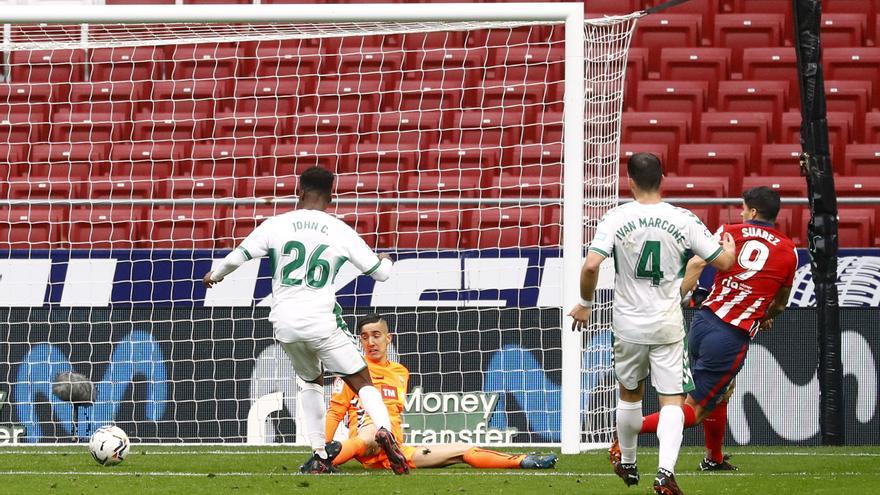 A lot of Luis Suárez and too much arbitration rigor for Elche. The franjiverde team has fallen this Saturday on their visit to the leader Atlético de Madrid (3-1), victim of two goals by the Uruguayan forward and a highly disputed penalty indicated by the referee Estrada Fernández when the Elche team had reduced the advantage through Lucas Boyé (2-1) and began to put Simeone’s men in trouble in the search for a tie. Despite showing their face and showing a good image in the Wanda Metropolitano, Elche aggravates their delicate situation after seven consecutive games without winning and Tuesday’s game at home against Osasuna gains even more rank of “final” in December due to permanence.

Elche’s Numantine resistance plan lasted for forty minutes, which was defended with great order until Luis Suárez scored his 151st goal in 200 matches in the Spanish LaLiga. It was a shame because moments before, a feisty and inspired Lucas Boyé had caused Hermoso a yellow card foul in midfield, but the green-fringes lost her again too soon and Atlético surprised Jorge Almirón’s men out of place for the first time: Lemar drove quickly towards Llorente, whose opening to Trippier was converted by the Englishman into an assist to the Uruguayan scorer. All very fast and on the run to break the spider web of the Elche group.

Almirón did not reserve anyone from the exit, who tried to reproduce in the Wanda Metropolitano the same game plan that gave him such a good result in Villarreal (0-0): maximum defensive concentration and intense and active withdrawal to close the spaces and passing lines to players of the quality of Joao Félix, Carrasco, Llorente, Koke and company. But Elche were more uncomfortable than at the La Cerámica stadium because the very high pressure from the rojiblancos made it very difficult for them to get the ball out and circulate the ball. The party plan for the franjiverdes was to lengthen the process and resist as long as possible, but he lacked possession to deactivate the intensity of Simeone’s.

The biggest surprise of Almirón’s “eleven” was that of the kid from Ilicitano John Donald, who made his second consecutive debut after that of the Cup on Wednesday in Buñol (1-2). The 20-year-old Hispanic-Nigerian showed serenity and manners, but Luis Suárez won the place and anticipated close to the small area on the 1-0 play. Already at the start of the contest, the Uruguayan also won his back in an action designated as a penalty by the referee Estrada Fernández, who shortly after invalidated the VAR for an offside by a few centimeters from the Uruguayan.

Luis Suárez broke down the franjiverde wall, in collaboration with Lemar, who had left Saúl Ñíguez from Elche on the athletic bench -possibly in his lowest hours as rojiblanco- and that he was the most active of the locals in this first act, exchanging his band in the interior position with Carrasco without being detected by the dense defensive cobweb of Elche. Simeone’s team did not generate too many goal options, but it was clearly superior to the franjiverdes, who did not finish off or approach Oblak’s domains with danger.

Almirón did not like the panorama, who introduced a double change in the break: Rigoni and Sánchez Miño for Josan and the youth squad John under the downpour that was already raging on Madrid. And if the subsidiary player was somewhat tender in the 1-0, the same happened to the veteran Sánchez Miño in the second athletic goal in the 58th minute: Carrasco filtered a cross from the left, the Argentine side of Elche fell asleep and Luis Suárez beat her back again to push her from the ground in the small area and score his seventh goal of the course. Who said that the charrúa was beginning to show signs of being finished?

The match seemed doomed when Elche got fully into it after a very good laboratory move: Fidel threw a very tense corner at the near post, Tete Morente combed backwards and Lucas Boyé, the best of the franjiverdes, beat the great Oblak with his head in the small area (minute 64). It was the first shot on goal for the Elche team, who suddenly regained faith to seek the equalizer against a leader who shortly after was left without Joao Félix due to injury. Spurred on by his third goal of the season, Boyé was close to 2-2 in great action in the 74th minute when he lowered the ball from high up, settled down and his shot parried it to a corner Oblak near his right post.

But four minutes later It was the turn of the referee Estrada Fernández and the controversial VAR, who conceded a penalty more non-existent than rigorous when Marcone raised his leg in the area, hit Diego Costa on the outstretched arm and the Spanish-Brazilian dramatized the fall to simulate a much greater contact than was actually produced. The Lagarto forward transformed the maximum penalty and cut short the reaction of an Elche who had pride and order, but sinned from a lack of depth in the first hour of the game and forced himself to win on Tuesday against Osasuna so as not to end the year with the water to the neck.

Incidents: match of the fourteenth day of LaLiga Santander, played at the Wanda Metropolitano stadium behind closed doors due to the coronavirus pandemic.