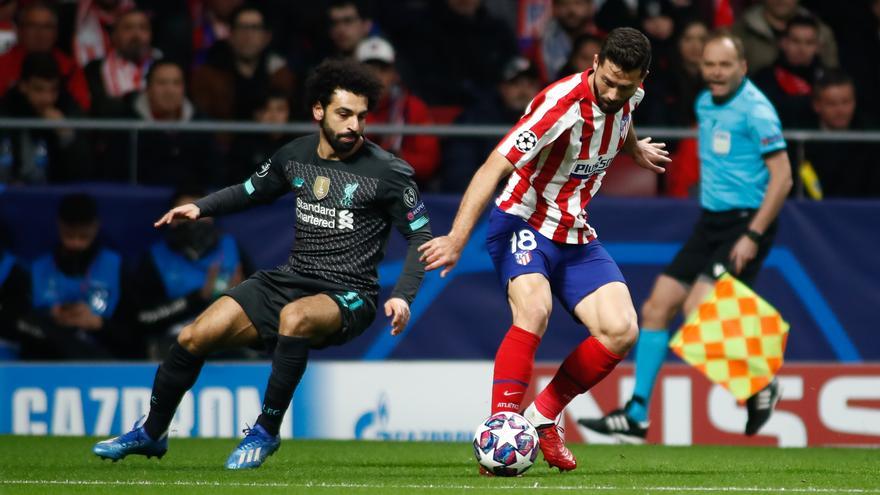 Nothing more than six victories in his last 16 European games, the agonizing triumph in Milan or the draw with which he survived against Porto alert the Atlético de Madrid, which exhibits in the Wanda Metropolitano its own and recurring concerns in the Champions League with a counter-offensive against Liverpool, the highest scoring and finishing team in this edition of the tournament and the most visible and fearsome opponent at the top of the group.

His eight goals and 44 shots transform the English team into the most imposing offensive reference so far in the first two rounds of the maximum continental tournament and they enlarge the challenge that awaits Atlético, still to be found in all its dimensions, at least the expectations that such a powerful squad awakens, which needs to arm itself in an incontestable team and that is pending fit two essential pieces: Antoine Griezmann and Rodrigo de Paul. The first is expected on the bench; to the second, in the eleven.

There is no more conclusive litmus test than a game of such magnitude, with a rival like Liverpool, so offensive, so fast, with so much rhythm and with so much overflow, when their mechanisms work so tight, when Mohamed Salah, Firmino and Sadio Mane put each defense in front of them in a constant commitment.

Although Liverpool no longer instills the fear of a year and a half ago, when it was still the current European champion and was launched for the Premier League, it continues to maintain the core of then and also has recovered the best Mohamed Salah. The Egyptian is the weapon that every Atlético fan must fear. Has returned to be the unbalancing and decisive player from his first season at Liverpool, when he broke the Premier League record for goals. His last performance against Watford is a good example of what he is capable of. A masterful assistance with the outside to Sadio Mané and a goal, dancing to the defense. The second in just fifteen days, because neither Bernardo Silva nor Aymeric Laporte have yet forgotten the wiggle that Salah hit them at Anfield.

His dribbling is the way to decongest games for Liverpool, which also has Mané, who reached 100 goals in the Premier this weekend, and Firmino, author of a hat trick against Watford. Jürgen Klopp finally has the withdrawal of Thiago Alcántara. The German gave Alisson and Fabinho a break against Watford and had them fly directly to Madrid after their international commitments, to avoid having to quarantine in the UK. The two Brazilians will be available for this Tuesday, after exercising these days in the Spanish capital.

Group leadership is at stake. He is from Klopp’s team, reaffirmed by his two wins in two days in the ‘Champions’, and Atlético wants him. The English team beat Milan 3-2 and thrashed Porto 1-5; the Spanish won 1-2 at San Siro and drew 0-0 with the Portuguese bloc. The difference is the two points that separate them.

It is the most tangible, but not the only one. If Atlético has suffered every moment so far to add each point, Liverpool has been a scorer and decisive, to the point that no one has scored more goals than him in this edition of the Champions League, tied with Bayern Munich, and no one has finished as much as him: 44 shots.

There are 16 more – in front of the same rivals – than Atlético, which neither understands nor admits the impossibility of any objective. Even less with the squad he has made, of which only one player is out of action for this Tuesday’s match: Stefan Savic, who will serve the penultimate of his four suspension games in Europe. Simeone has already completed his counteroffensive, within the structure that best performs for him now, with five defenders, with the most recognizable base of his team and, predictably, with José María Giménez and Marcos Llorente.

Freshly recovered from muscular injuries, the two aim for the starting lineup. In the case of the Uruguayan as center back with Felipe Monteiro and Mario Hermoso; in Madrid, probably as a right-winger, as he already exercised in the last duel against Barcelona, ​​as well as Yannick Carrasco from the left side.

The goal is from Jan Oblak, the protagonist of the memorable feat – or miracle – that was the qualification for the quarterfinals of the Champions League in 2020 against Liverpool, when gave off even more voracity than now, but was appeased by almost the same current rojiblanco team – if perhaps stronger in the present – in the Wanda Metropolitano in the first leg and resisted fortunately in the return leg at Anfield, supported by the incredible Slovenian goalkeeper and revived by two goals from Marcos Llorente.

Son two of the only six wins (the others are two wins against Salzaburgo, one against Lokomotiv and this year in Milan) in the last 16 European duels of Atlético, whose midfield will rearm for the appointment with Geoffrey Kondogbia -if Giménez is fit, yes He would not play central-, along with Koke Resurrección, Thomas Lemar and probably Rodrigo de Paul, and whose attack will be for Joao Félix, either alone or with Luis Suárez.

Since 2-0 Barcelona, ​​Atlético has not competed. 17 days ago. The benefit or harm of such a situation will be determined by this Tuesday’s game. Will also verify what is the team moment, who needs more than he has shown so far to become the block that his individualities promise.