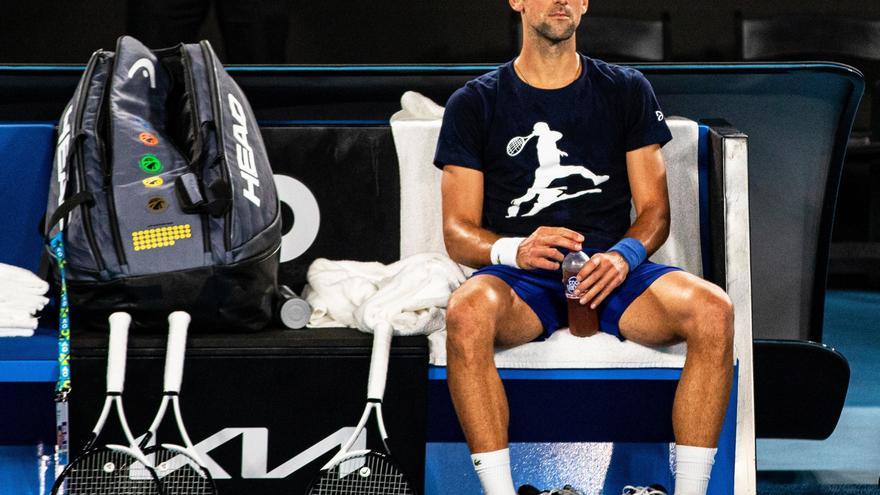 The government of Australia did not give the arm to twist. Novak Djokovic, Unless the challenge that his lawyers have presented before the Federal Court prospers, he will be expelled from the country after being detained and returned back to the hotel for citizens about to be deported. The number one in the world He is due to appear in Federal Court on Sunday morning (Australian time) and, if the judges do not say otherwise, will then be forced to catch a plane back to Serbia without being able to play the Australian Open, without being able to aspire to the tenth victory in the tournament and without the option of winning his 21st Grand Slam.

#Breaking | Novak Djokovic is back in Carlton’s Park Hotel after police cleared the way for two cars to depart his lawyer’s offices ahead of a Federal Court hearing on Sunday morning #Novak #novakdjokovic #ausopen @DjokerNole @AlexHawkeMP @AustralianOpe… https://t.co/b3N18ipNAL pic.twitter.com/D3N1Xyjgfk

Djokovic was seen in a photograph inside a white vehicle that left the offices of his lawyers in Melbourne to which two police cars made way for him. The tennis player appeared dressed in a green tracksuit and a mask. Outside the Park Hotel some followers of the tennis player were waiting, protesting his arrest, although the area filled with more people as it transpired that the Serbian tennis player was staying there again. On Sunday he will be escorted by the police from that same hotel to the room where the trial that should end this whole serial will be held.

The sports aspect of the whole mess that Djokovic’s trip to Australia has caused has been left in the background, since yesterday the government lawyers explained that the main reason why the Immigration Minister, Alex Hawke, had canceled his visa was to prevent the Serbian player from becoming a symbol of the anti-vaccines, in a country that, like the rest of the world, is plagued by the omicron and with a very high rate of immunized people. 91.4% of Australians have received the double vaccination schedule.

An emblem of world sport, the 34-year-old Djokovic’s career has suffered the scourge of reputation that would hardly have brought him the worst of defeats on the court. In addition, with the aggravation of the doubts that his action has caused in this whole case. He forgot to tell the Australian customs agents that he had traveled to Spain before flying to Melbourne, went to public events in his country without a mask and even gave an interview to the newspaper ‘L’Équipe’ while infected, which has come to irritate to one of its most ardent supporters, Serbian Prime Minister Ana Brnabic.

Djokovic He agreed to be arrested in Melbourne, in a place agreed by his lawyers to prevent the media impact of images that would have traveled around the world. There was no other option, after this Friday, the Melbourne judge Anthony Kelly, the same one who returned the visa withdrawn at the airport on Monday, ordered that after making a statement he be taken back to the Park Hotel, a hotel establishment now converted into a detention center for people who are pending deportation.

Also Read  Afghanistan: the dangerous route to Kabul airport faced by those trying to flee the country

The organization of the Australian Open kept him this Friday as the first seed, without touching the table that the draw provided. But, opposite, is a government determined not to play, not to give an option to the voices that have made it a symbol of supposed freedom for not wanting to be vaccinated against covid. And, on top of that, if he loses the case, he risks being banned from entering Australia until 2025.

“It was necessary to cancel the visa for the general interest of the country and because Australians expect us to protect them for all the sacrifices they have made during the pandemic. We are one of the countries with the highest percentage of vaccinated. The visa has been canceled for health reasons,” he defended Scott Morrison, Prime Minister of Australia, in a case that has worn his government out in an election year.

In the same line spoke the head of Immigration. “His visa has been withdrawn for health reasons and because we must protect our borders, especially in the fight against covid 19,” he argued. Alex Hawke.

“It was necessary to cancel the visa in the general interest of the country,” says Scott Morrison, Prime Minister of Australia.

The text of the cancellation. EP

Djokovic He is about to lose a match that comes with a pandemic that hardly gives rest as it happens between games of a set and with hardly any tennis players who have defended him. None of the great rackets have spoken in their favor. They have been silent Roger Federer or Daniil Medvedev (number two in the world) or they have censored it more or less harshly Reef Nadal, Andy murray and Stefanos Tsitsipas, fourth in the world. Djokovic He has been very lonely on a journey to nowhere.

Also Read  Third loss in a row for the Ibaka Clippers