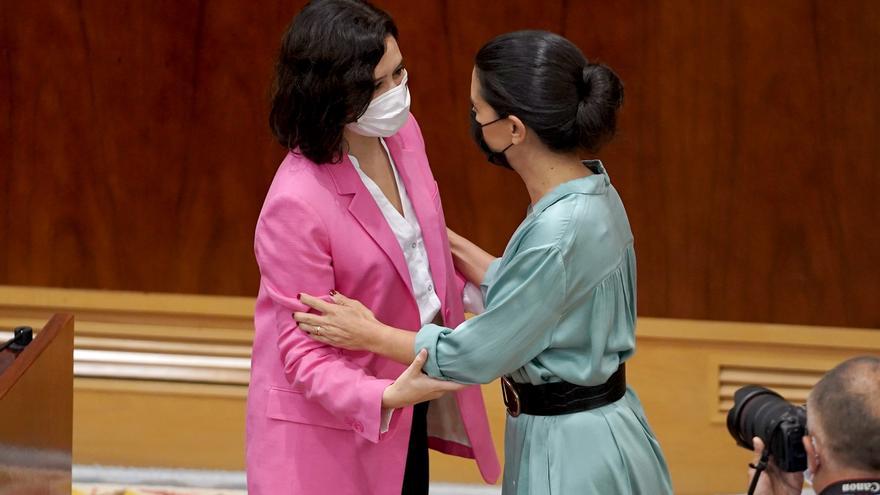 Isabel Díaz Ayuso has been sworn in as president of the Madrid’s community this friday with the votes in favor of the PP and Vox and against Más Madrid, PSOE and United We Can.

In this way, Ayuso will rule alone for two years in this brief legislature that has just begun, shortened by the electoral advance, with the only external support of Vox, which has not raised any conditions in exchange for its support, and now without Citizens, who was its government partner in the previous term .

Ayuso has recovered Marta Rivera de la Cruz for his new Government in the Community of Madrid, who in the coalition Executive with Cs served as Minister of Culture and Tourism on behalf of the orange formation and now, after withdrawing from the party, will add the Sports portfolio to these two competencies.

In addition, Ayuso incorporates his new Government, which reduce counseling from 13 to 9, to the former government delegate in Madrid Conception Dancausa as Minister of Family, Youth and Social Policy already Carlos Left as counselor of Local Administration and Digitization.

Izquierdo was councilor for the Environment and Spatial Planning during the Government of Ángel Garrido in the Community of Madrid and previously councilor for Social Policies and Family with the Executive of Cristina Cifuentes and councilor for the Madrid City Council.

For her part, Dancausa has been, in addition to being a government delegate in Madrid, director of the Women’s Institute, general secretary for Social Affairs of the Ministry of Labor and Social Affairs, president of the Madrid Assembly, first deputy mayor and, in the last legislature, Deputy Minister of Housing and Local Administration.

Izquierdo and Dancausa are the only two novelties in the new Ayuso Government, who has just been invested president of the Community of Madrid with the votes in favor of PP and Vox.

An expected return is that of Rivera de la Cruz, who came to politics from the hand of Albert Rivera in 2015, when she was elected deputy for Madrid in Congress, and was signed after the 2019 regional elections as Minister of Culture and Tourism in the coalition government of PP and Cs in the Community of Madrid.

She was dismissed like the rest of the members of the Government of Cs after the electoral advance decreed by Ayuso, with whom however he has continued to maintain a good relationship.

The other six Ayuso councilors are those who were already part of the previous Government on behalf of the PP, except María Eugenia Carballedo, who left the Executive in which she served as councilor of the Presidency after being elected president of the Madrid Assembly.

Thus, for example, Enrique Ruiz Escudero will continue to act as Minister of Health and two others are consolidated as strong men in the Executive: Enrique López as Minister of the Presidency, Justice and the Interior and Enrique Ossorio as Minister of Education, Universities, Science and Government spokesman .

The rest maintain the powers they already had and assume a new one after this reorganization of the Executive.

Also Read  "I do not remember a gray transition, but a stage full of life"