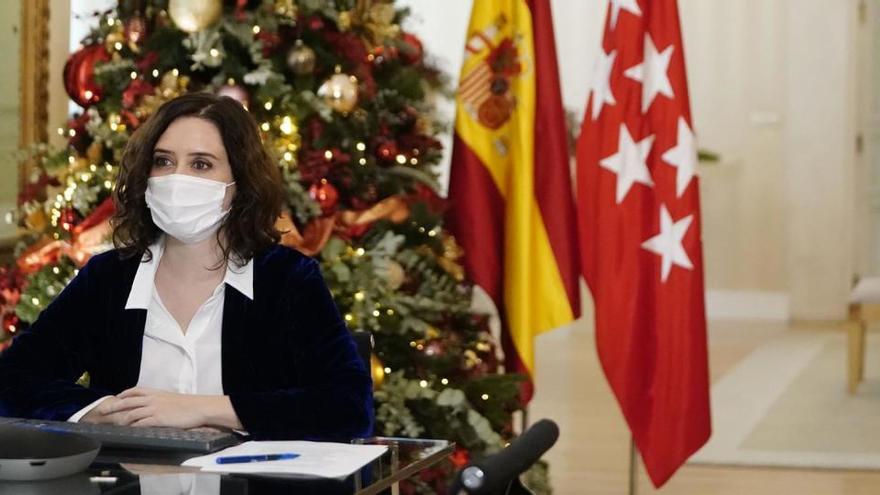 The president of the Community of Madrid, Isabel Díaz Ayuso, met this Thursday by videoconference with the President of the European Committee of the Regions, Apostolos Tzitzikostas, to to expose the “very defined strategy” of the autonomous government against the Covid-19.

“We have been pioneers in the management of this virus in Spain, both in the first and in this second wave, “Ayuso assured, with a roadmap based on the” commitment to the diagnostic capacity to stop the coronavirus, “selective confinementS and a commitment to hospital capacity, according to the Community of Madrid in a statement.

Tzitzikostas has stated that he will soon travel to Madrid to visit the Isabel Zendal Nurse Hospital and learn about the facilities and how they work.

Along these lines, the president has highlighted the role played by the temporary hospital of the Community of Madrid which was activated in “record time” in Ifema, “praised from the WHO and the president of the European Commission, Ursula von der Leyen”.

Likewise, he pointed out that now the new “Public Hospital Nurse Isabel Zendal is a healthcare center for Europe“in this second wave that is affecting the continent” more harshly than the first, “he said, after sending” a message of support and solidarity with Europe. ”

The Covid-19 crisis, the economic situation derived from the pandemic and the role of the EU to combat it have been the axes of this telematic meeting from the Royal Post Office, headquarters of the regional government.

The president of the Community of Madrid has defended the “multiple initiatives” adopted by the regional government to stop contagion, thanks to a strategy that has combined “very specific public health measures, and surgical restrictions on mobility, hours and capacity, always appealing to the freedom and responsibility of all citizens so that health and the economy they were not incompatible “, they have detailed.

Ayuso has listed the “commitment to the diagnostic capacity to stop the virus” with massive tests and the purchase of 5 million antigen tests “that revolutionized our reaction capacity”, together with the selective confinements or the “great hospital capacity” of the region.

In addition, he highlighted the regional government’s strategy with selective mobility restrictions in small areas but with a high incidence, which have been “more effective than general confinement because they further restrict the mobility of people with more possibilities of infecting it and allow the rest to continue leading a normal life”.

The Madrid president has recognized the Committee of the Regions for her initiative capacity within the EU at the start of the pandemic, with the action plan to help regions and local entities in the fight against the coronavirus, the constitution of the platform for the exchange of information and mutual support and its call urging the European institutions to take measures for health and economic recovery.

On the other hand, the president has detailed to the president of the European Committee of the Regions that the Community of Madrid, despite being one of the European areas most affected by the health crisis, “he hopes to act as an economic engine” for having been “the ones who have most supported the self-employed and generators of employment throughout the country” with bonuses or facilities to get credits.

“Above all we have been the ones who have shown that health and the economy are compatible,” said Díaz Ayuso. “In fact we began to observe elements of recovery In the labor market. In a moderate and cautious way, we are beginning to create jobs “, he stressed, while transferring his” concern “about the economic management of the central government on public finances due to” the succession of large deficits that will lead to a public debt of 120% of GDP “.

Ayuso has influenced that now “more than ever” the EU countries “must be united and make Europe from the regions” because “complicated years are coming” and Europe itself “is the firm reflection of the values ​​of liberal democracy: prosperity, solidarity, humanity and justice.”

“It is important,” he added. that Europe continues to ensure compliance with the rule of law and constitutional principles, as it is doing so far “, while expressing to Tzitzikostas his” concern about populist and involutionary processes in some countries, including Spain “, something that he considers must be avoided and for this” Europe has a leading role. ”

On EU funds in the face of the economic and social consequences of the pandemic with the ‘Next Generation EU’ program, Díaz Ayuso has pointed out that the Community of Madrid defends that “the regions must have a leading role in its execution”, given that the autonomous communities are responsible for more than half of public spending.

The regional president already asked Von der Leyen in October that this distribution be “objective and transparent, although it is most likely that in Spain it will be carried out from an office that depends on Moncloa’s chief of staff.” The regional government will present within the deadline, in the first half of 2021, its projects to receive funding from this initiative from Brussels.

From the regional government, they recalled that the European Committee of the Regions is made up of 329 members, representing the regional and local entities of the 27 Member States of the European Union. It issues opinions in cases of compulsory consultation contemplated in the Treaties, in cases of optional consultation and on its own initiative if it deems it appropriate. Its members are not bound by any mandatory mandate and they exercise their functions with full independence, in the general interest of the European Union.