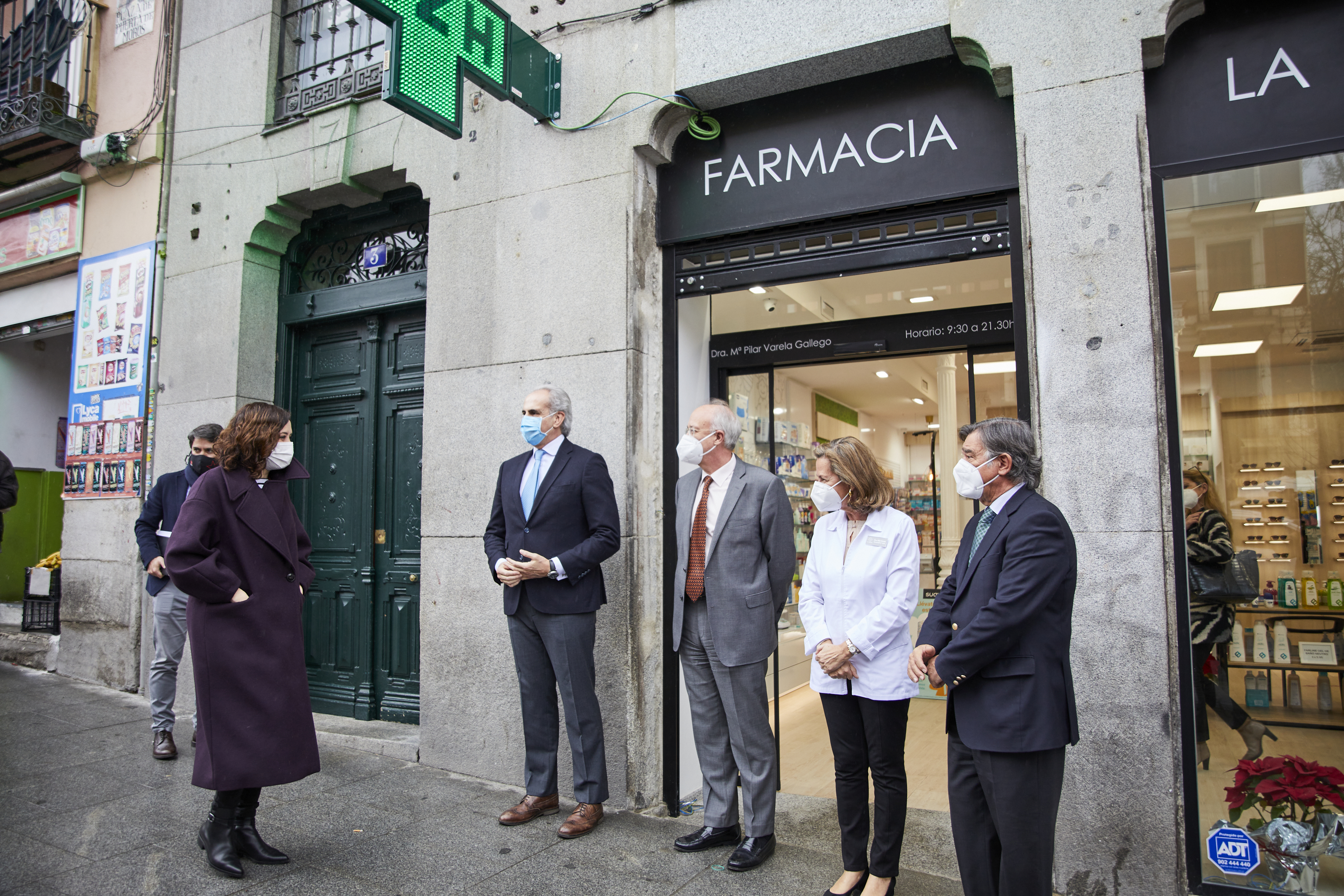 Isabel Díaz Ayuso walks slowly through the La Latina neighborhood. From the very beginning, a very flamenco neighbor puts Los Chunguitos at full blast: “It tastes like smoke to me, it tastes like smoke, the cigarettes that I smoke.” The president of the Community of Madrid goes to a pharmacy with this background music. There are nerves in the place. One of the two attendants adjusts a pair of colored toothbrushes from a shelf. You never know what a top politician can ask for. Ayuso’s team chose this central pharmacy in the capital on Tuesday as a representation of the first 100 that have requested to do an antigen test in the coming days. The measure was announced two months ago, it was announced again this Monday and Ayuso called the media on Tuesday to highlight it. The Community of Madrid is an expert in announcing what has been announced several times. Without political action for more than a year, with budgets carried over from 2019 and without any new law approved, the propaganda covers the lack of management.

The staging was perfect. At the door of the pharmacy, the president of the Official College of Pharmacists, Luis González, was waiting for him; the owner of the pharmacy, Pilar Varela Gallego, and the Minister of Health, Enrique Ruiz Escudero. Ayuso arrives at the premises:

-Good morning how are you?

“Nice that you are in my house,” says the owner.

The president approaches the microphones: “We have come to one of the pharmacies that as of this Thursday will be able to do these antigen tests for the Community of Madrid. They will be pharmacies that are within a list. Those who need or want can take a test. So they can request it and come to these pharmacies to do it ”. By the way, he repeated again that Madrid will once again distribute two free masks in the coming weeks for those over 65. Ayuso, smiling, enters the premises. You already have the image you wanted.

It is not the first time that the president’s weekly agenda has been characterized by propaganda events. It happens often. In July 2020, when the second wave quietly began its crusade through the region, the president summoned the media to another event in the central building of Puerta del Sol. Here she spoke about Operation Chamartín, which was approved on March 25 . Three months later, Ayuso presented the model. One more; since two years ago in the portal of Paseo de la Castellana number 120, there was also another one on display. In fact, it was visited by more than 26,000 people from Madrid. This great work of engineering that Ayuso boasts began to take shape in 2004.

The communicative action of the president’s environment transmits a very clear line during the pandemic: direct confrontation with the Government of Pedro Sánchez and selling at all costs that the Government of Madrid is very active. The plan is to transmit government action without new laws or budgets. The same happened with the Isabel Zendal hospital, which received several visits from the president to supervise the works. More than 80 media attended the inauguration on December 1. The idea of ​​his team is to have daily events that need the assistance of the media. A purpose identical to that used by former president Esperanza Aguirre during her years in power with the works. In the absence of new projects, photographs.

Another example was the Covid-19 primer, which the president announced last July and lasted only 24 hours. Ayuso summoned journalists to a great event in the Puerta del Sol building. He said that if a man from Madrid had already passed the virus, he would have a card with privileges: access to gyms, cinemas, museums. The rest, no. The decision was criticized by the scientific community, the World Health Organization, the bloc opposition and health groups. The next day it was dismissed. Ayuso’s card went from being one more card in the pocket of Madrid to an Excel document for health workers in a matter of hours. But they talked about it for 48. If you do not pass laws, you can fill in the gatherings and generate debate among citizens.

His image dressed in black simulating a virgin to an interview with the newspaper The world was another example of distraction in May 2020. No one remembers the responses, only the photograph, which generated tens of thousands of messages on WhatsApp groups and social networks. 24 hours later, she apologized herself. To this controversial portrait is also added the idea of ​​Telepizza’s children’s menu for families and children in need that she ended up discarding. Or the announcement of the first plane with medical supplies in Spain, which finally arrived weeks late.

Another day of propaganda happened last November. The president summoned the media at the Botín restaurant in the capital. A whole tablecloth institution in Madrid. This family business claims to be the oldest in the world and serves delicious suckling pig roasted in an oak wood oven. Ayuso’s team called the press here to put a “covid stamp” on the door. A visible sticker the size of a sheet that serves for the customer to see that the establishment complies with the necessary hygienic measures. The reality is that more than 3,000 establishments already wore this badge in the region for several months. However, this hotel event was attended by the president of Madrid businessmen, Miguel Gutiérrez; the vice president of the region, Ignacio Aguado, and two directors. Ayuso entered the business and she herself stamped the sticker on the door. In the absence of plans, covid stamps and media.

This Monday, in another meeting with the representatives of the hoteliers, he announced the commitment that they would be vaccinated as soon as possible along with the teachers and taxi drivers. Ayuso knows that this decision does not correspond to her, but to the Ministry of Health. But the idea is launched and the citizen and his potential voters are left with the message that, at least, someone thinks of them, that they are taken into account in the middle of the storm. According to the president’s team, these measures have been successful in the polls, where they are already close to an absolute majority. At the Latina pharmacy, a neighbor came to visit the owner of the store a few minutes after Ayuso left:

– Congratulations, Pilar. The president has chosen you.