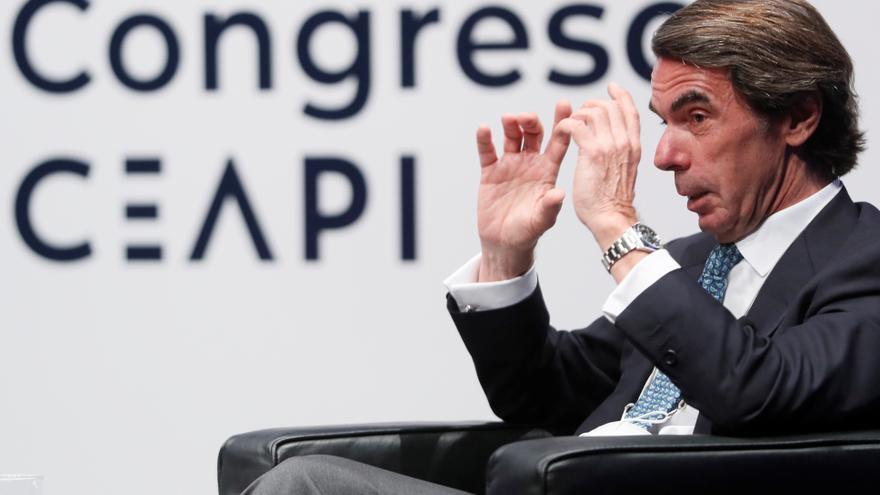 The former president of the Government José María Aznar has assured this Tuesday that the Madrid elections have caused a “cycle change” coupled with a process of “regrouping of the center-right”, still “incomplete”, which is “very important” for the governance of Spain. In addition, he pointed out that there has been a “very dangerous” process of fragmentation of the left that will lead to the government led by Pedro Sánchez going to “radicalize more”.

In his speech at the IV CEAPI Ibero-American Congress held in Madrid, Aznar stressed that there has been “a very important change” in the elections in the Community of Madrid. “I think a political cycle has changed,” has highlighted.

As he explained, at this time “there is a phenomenon of regrouping of the center-right that is very important for the stability and governability of Spain.” Of course, he has indicated that this process is “incomplete” -in allusion to Vox- but it is a “very relevant” movement. “In that the elections in the Community of Madrid have been absolutely decisive,” he added.

Aznar has launched as a second reflection the fact that there has been a “very dangerous process of fragmentation of the left”. “What I think is going to happen now is that radicalization in the world of the left will accelerate in Spain. This majority of the government, what some called the Frankenstein majority, is going to become more radical,” he predicted.

“Separatism will be played”

At this point, the former president has stressed that the Executive led by Pedro Sánchez governs with “communists, with former ETA terrorists and with the Catalan separatists.” In fact, he has predicted that in Catalonia, after announcing the principle of agreement between ERC and Junts to form a Government, “nothing good” is going to happen.

“When you put a bad sowing in the land, a bad harvest comes out. If there is a separatist government, separatism will be played. This is what is going to happen,” he said, adding that it is already being said that the Government of Sánchez “It will accelerate the pardons.”

At this point, he has criticized that those politicians condemned for the ‘procés’ they gave “a coup” the Government of Spain may pardon them. “There is another policy: whoever wants to load the Constitution and the unity of Spain, pays for it,” he proclaimed.

The former president of the Government has defended the 1978 Constitution, one of the “great successes” of Spain together with the convergence in the euro, and has asked to recover “respect for the constitutional pact”, “political alternation”, “respect for the Rule of law and the law “and rule with common sense “. In his view, these are issues that are being “mistreated today” in Spain.

“I wish the great pacts between the large center-right and center-left political forces, which were very positive and led to the transformation of Spain, “said the former President of the Government.

Aznar has alluded to political leaders of “moderate socialism” as Nicolás Redondo or Joaquín Leguina, and has criticized that the PSOE is going to throw the former president of the Community of Madrid “for defending that the natural thing is to agree” between the PSOE and the PP. “They are two names of height and as they are of height, they are going to throw to them, has emphasized.

Before the anniversary of the birth of the 15-M movement a decade ago, Aznar has indicated that he “never” had “no hope in 15M” nor that “anything good came out there.” In his opinion, “practically nothing good” has come out of the breakdown of the bipartisanship.

In addition, Aznar has challenged the Government of Pedro Sánchez that instead of being focused on current problems with crises such as Ceuta, it is thinking about plans for the year 2050. “I have read that they are going to solve our lives until the year 2050 next Thursday,” he ironized.

The former Prime Minister has asked Pedro Sánchez “not to abdicate his responsibility” as, in his opinion, he has done in the pandemic at “transfer” that responsibility to the autonomous communities and to the Supreme Court, once the state of alarm has ended.

Situation in Chile and Colombia

After ensuring that the Latin American political situation is “extraordinarily complex and very worrying,” he has focused on countries like Chile, where, in his opinion, “the worst fears are confirmed” because “Populism is a growing phenomenon and not a decreasing one.”

Aznar, who recalled that the stability that Chile had experienced these years, highlighted that as a result of the “social revolt” with the “pretext” of the rise in metro fares, “a constituent process in the radical left” is going to develop now. In his understanding, this situation “in the best of cases opens a period of enormous uncertainty for the country” and “in the worst of cases it can open a pseudo-revolutionary process.”

“And Colombia, which is the great jewel that the destabilizers want to conquer, the exact same thing is happening “He warned, to add that “the tactics” to destabilize this country “are the same” that have been used in Chile.

Regarding Venezuela, he said that now “a negotiating formula is going to be tried”, something that, in his opinion, “it’s just wasting time again” because “it’s just trying to manage smoke.” In addition, he highlighted the fact that Nicolás Maduro “has taken over” the national newspaper, the “remaining organ of freedom of expression” in the country.