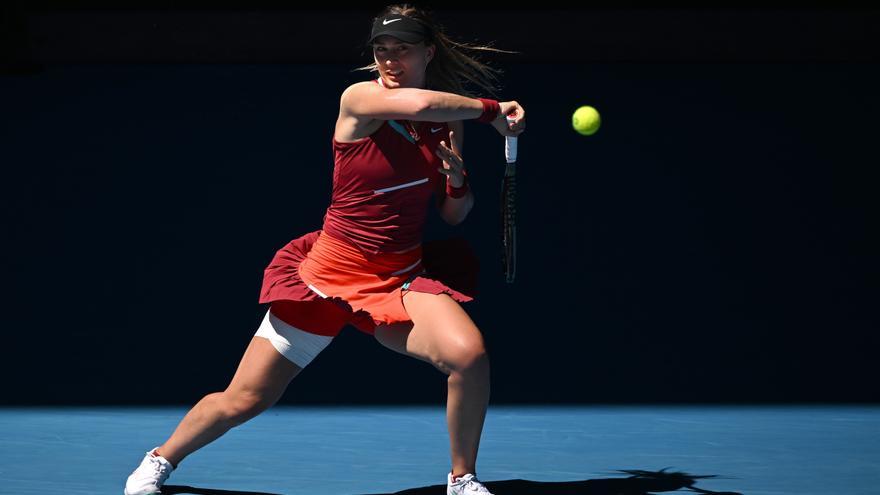 The Spanish Paula Badosa (8) qualified on the fast track after beating the Italian from qualifying Martina Trevisan for a severe 6-0 and 6-3 in the second round of the Australian Open. “She is a fighter, she has a very beautiful story. I am very happy to have achieved the victory”, he commented after equaling his best mark in the great Australian.

Badosa impressed the few public that showed up in the first morning shift at the Rod Laver Arena after leaving his rival clean in a first set in which he conceded only four points on serve. The Spanish tennis player born in New York reduced the defensive capacity of the Florentine with a repertoire that ranged from opportune changes in height, taking advantage of the short stature of her rival, to aggressive parallels that dismantled the order with the Italian’s crusader.

The Girona dispelled doubts about her physique after she received medical treatment during the first set of her first match against local Ajla Tomljanovic. He will arrive in full condition for his third-round appointment after closing the pass after one hour and ten minutes, and will meet the Ukrainian Marta Kostyuk, who occupies position 66 on the WTA list and with whom he maintains a great friendship. .

The Spanish Sara Sorribes (32) could not with the 19-year-old Ukrainian girl Marta Kostyuk on a day marked by the wind fall by 7-6(5) and 6-3 in the second round. Despite the fact that she played the important points with determination, with a four out of four break points, the Castellón player added a few winning shots that contrasted with the 33 of the Ukrainian. Sorribes could not overcome his best time on the banks of the Yarra River that dated from his second round achieved in the 2020 edition.

For its part, the grenadine Nuria Parrizas He raffled the second round without playing his match after his rival, the Belgian Maryna Zanevska, dropped out of the competition hours before the start of the match. Luck was once again on the side of the 30-year-old Spaniard after she avoided meeting the Tunisian Ons Jabeur (9) in the first round, and had to face the Romanian qualifier Irina Bara for the same reason. Párrizas, who after his victory in the first round influenced the positive consequences of working with a team for the first time, far exceeded his expectations for what is being his first main draw in Melbourne. In the next round, she will face the winner of the duel between Americans kept by Jessica Pegula (21) and Bernarda Pera.

The Belarusian Victoria Azarenka (24) and the Ukrainian Elina Svitolina (15) did not slow down and will be in the third round after beating Switzerland’s Jil Teichmann 6-1, 6-2 and France’s Harmony Tan, who retired after losing 6-3, 5-7, 5 -one. Paula Badosa (8) warned after her stumble against her in Adelaide that Azarenka, the double Melbourne champion, is at a brilliant level and the Belarusian confirmed these statements with another solid performance in which she only committed thirteen unforced errors. Her next rival will be the Ukrainian Elina Svitolina and she will have the opportunity to put more ground in between in the resounding head-to-head in favor of the Belarusian (4-0). Svitolina, who has never lifted a slam trophy despite being third in the world, will try to overcome an inspired Azarenka to continue with a chance of equaling the fourth round won in the last edition.

Another of the favourites, the Australian Ashleigh Barty (1), once again signed a solid performance against the Italian Lucia Brozetti from the previous round after beating her by a double 6-1 in less than an hour and will face in the next round the Italian Camila Giorgi (30). She convinced again at Rod Laver Arena in front of a vibrant ‘Aussie’ crowd who could watch as a local player breaks the 44-year-old curse of no Australian champions. The first world ranked accumulated a dizzying 86% of the points with firsts, 21 winning shots and 14 unforced errors. The Queensland tennis player has a favorable 3-0 head-to-head with her next rival, the transalpine Giorgi, after a tough three-set battle was scored the last time they met at the Australian Open in 2018.

Badosa: “I have a great relationship with many players”

Paula Badosa explained that she has a good personal relationship with many of her rivals on tour after her victory in the second round of the Australian Open. “I have a great relationship with many players. Being normal and a good person, it’s nice to behave like that. For me it is easy to separate what happens on the court and what happens outside”, he commented after accessing a third round in which he will face his Ukrainian friend Marta Kostyuk, executioner of his compatriot Sara Sorribes. “I have followed Marta a lot. She is very talented and has a lot of potential, so I will have to get the best out of me, ”he added after surpassing his best time on the banks of the Yarra River.

Also Read  What happened to the life of the successful Canadian singer Nelly Furtado?

Paula Badosa had to seek the assistance of the physiotherapist during her first match after suffering from thigh and back discomfort despite her victory against local Ajla Tomljanovic. “Today I was better physically and I have a lot of room to recover,” he said after opening the morning shift on Center Court Rod Laver Arena. “It means a lot to me to get to a third round here. It is a dream come true. In Spain it seems little for everything that Rafa has won”, he commented.