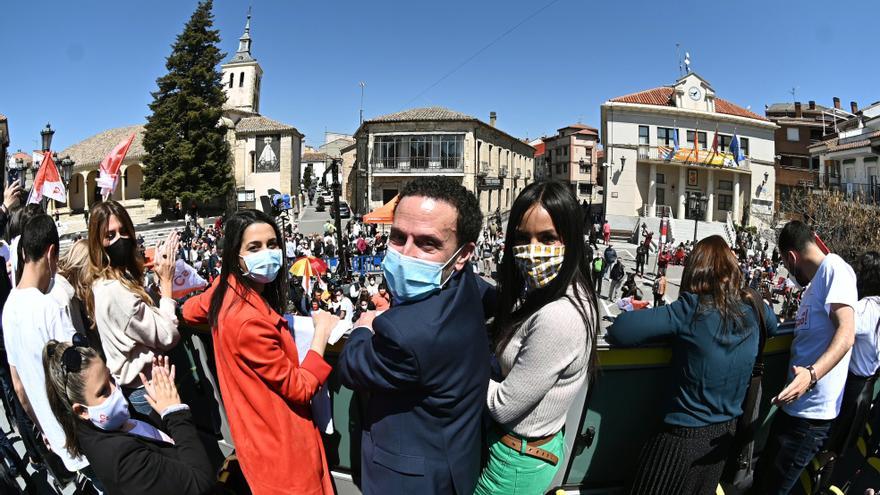 The candidate of Citizens for the Presidency of the Community of Madrid, Edmundo Bal, has highlighted this Sunday the role of the ‘oranges’ in the town councils of the region where he governs –30 of which in 8 have the Mayor’s Office–.

“In the municipalities we come to clean up corruption, lower the debt, not raise taxes and shorten the payment term to suppliers”, has launched in a campaign event in the Plaza Mayor of El Molar where he has been accompanied by the mayor of the town, Yolanda Sanz (Cs), the national president of the party, Inés Arrimadas, the vice mayor of the capital, Begoña Villacís, and other ‘orange’ positions in consistories of the Madrid geography.

Cs has chosen this municipality for its campaign start act -after yesterday’s hit- because in the 2019 elections they got 8 of the 15 councilors of the City Council, Raising Sanz to the Mayor’s Office with an absolute majority, as happened in other municipalities such as Valdemoro where the ‘oranjas’ also achieved municipal power.

As an example of this local management, he has indicated as the councilor of Valdemoro, Sergio Parra, who found a “nest of corruption” and after two years in office, “there have been no cases.” “I was with him in Valdemoro, visiting the project for a special education school, which is not even under construction because the president, Isabel Díaz Ayuso, has stopped the Community,” the Cs candidate has reproached.

It has also continued to charge against the PSOE and United We Can, pointing out the local government of Aranjuez, “first to give direct aid to entrepreneurs” and where, according to Bal, the two left-wing parties voted against investing 1.7 million in the city.

He has continued to criticize the socialist candidates, Ángel Gabilondo, and ‘purple’, Pablo Iglesias, whom he has accused of not wanting to govern, the first for being thinking “about retiring as Ombudsman” and the second because “he wants to be all the day watching Netflix. ”

What’s more, has slipped that the former second vice president would be seeking “to change the official car of the central government for that of the Community of Madrid”. “I meet some candidates who have firefighter ideas, who want to raise taxes, create more beach bars and not provide real solutions!”, He insisted.

At the same time, on the other side of the spectrum, he has charged against Ayuso’s will to govern with Vox with whom “he would be more comfortable” because he would not “demand” him in matters such as transparency or corruption. “He wants to govern with those who deny climate change, vaccines, say that the virus is Chinese with Soros in between … He only believes in a type of family and does not understand the meaning of the word freedom,” he reproached.

Regarding this hypothetical coalition, he has insisted that Ayuso would be willing to give Vox seven advice “which is what Monastery wants” and create new things to “give money to friends”.

He also highlighted that this Monday has dawned with the Sigmados survey for ‘El Mundo’, which shows an improvement in the data for ‘oranges’. “Day 1 of the campaign and we went up in the polls. We started well. We have 14 days left in the race,” he encouraged his followers.

The deputy mayor of Madrid, Begoña Villacís, charged this Sunday against the PSOE and the President of the Government, Pedro Sánchez, for “betraying” the town halls and their neighbors, calling them “municipatraitors” for not “getting a single euro since the pandemic began.”

“In these elections you have to opt for experience or experiments”, has asserted the municipal spokesperson of Cs during her intervention in the act of beginning of the electoral campaign of the party led by Inés Arrimadas, who also wanted to be present in El Molar supporting the candidacy of Edmundo Bal.

Villacís has highlighted to the members and followers of the party that Ciudadanos represents “the illusion” and “fight against populism, demagoguery and corruption”, but has stressed that it is also good management to have professionals who dedicate themselves “temporarily to politics” and do not “live” from it.

“You are councilors and you could have been mayors. But we are responsible and serious people. And we do have the floor, what others do not have. We have much more word than personal ambition. She could be the mayor of Madrid, and have presented a motion of censure. I have not done it because there are three million people from Madrid who need us, “he has reviewed, stressing that they do not need to be paralyzed” for a personal whim, “adding that he does not spend the day looking at surveys.

After that, he has valued the work of the municipalities because “their work is not recognized”, noting that they are “the skin of the administration.” “The first time a citizen knocks on someone’s door, it is at our door. When people need help, the door they knock is ours. The shops and hoteliers who are going to have to close their bar, knock on us. door. We are the first eyes to see, “he said.

Thus, he has reproached that they “do not deserve this treatment neither by the Community of Madrid nor by the President of the Government, Pedro Sánchez”, which “has not given a single aid since the pandemic began, being” a party that called itself municipalist. ”

“Municipalities what! Municipal traitors because they are who they are. They have been traitors to the town halls and all the neighbors who are listening to us and need us. Filomena arrived but the aid did not arrive but the bills from the Ministry of Ecological Transition have arrived. That is the solidarity of the PSOE.

The president of Ciudadanos, Inés Arrimadas, has asked for a vote for her party in the elections of May 4 in the Community of Madrid to prevent, in the next government, the candidate of Podemos, Pablo Iglesias, heads the Ministry of Economy or that the Vox applicant, Rocío Monasterio, be in charge of education or social policies.

At the rally on the first day of the electoral campaign, held in the Plaza Mayor de El Molar, in the northeast of Madrid, Arrimadas has attacked the acting regional president and PP candidate, Isabel Díaz Ayuso, for having broken the coalition government with Cs and called early elections on a “whim” and has stated that his intention is “to change Citizens for Vox”.

Faced with this possibility, he has warned that “you don’t play with Madrid” and that you shouldn’t “exchange experience for experiments.” “I do not want the economy to be led by Iglesias, but I do not want education and social policies to be led by Monastery. I want Cs to continue to be decisive because it is the guarantee of low taxes, good economic policies and also modernity, future, social policies with a heart , environment “, he stressed.