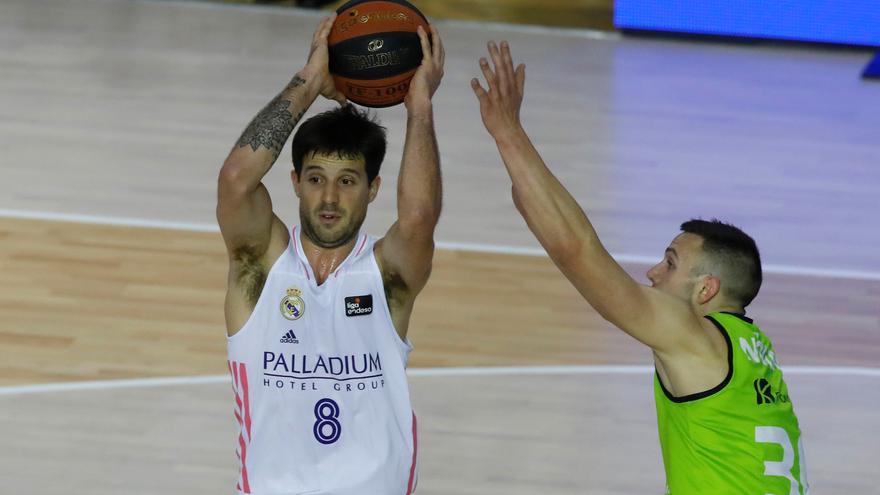 Moral rearming for Real Madrid in Fuenlabrada, where they won (76-90) with 20 points from American Jaycee Carroll and the key role of Rudy fernandez (13 points) in the 0-22 quarter that gave them the victory, a balsamic triumph two days before the future in the Euroleague was at stake.

Beaten 2-0 in the playoff against Turkish Anadolu Efes And without the Cape Verdean Walter Tavares due to the problems in the pubis that left him without playing the last game in Istanbul, Madrid took a break in Fuenlabrada, achieving their seventeenth consecutive victory in the League in a game unbalanced by a fight from Pablo Laso in the 17th minute, which started a 0-22 white run through which the game went from 38-34 to 38-56 (min. 22).

A triumph not without suffering because the ‘Fuenla’ starred in a commendable first half, even after 14 days without competing due to a coronavirus outbreak that left them without the league’s top scorer, the American Melo Trimble, and the pivot Chema González, both in quarantine, in addition to losing Marc García and Álex Urtasun due to injury to what remains of the campaign.

The duel added a record to the history of the ACB: Malian forward Bassala Bagayoko’s debut with Fuenlabrada, the earliest in the history of the championship beating Ricky Rubio’s record With just 14 years, 7 months and 15 days, he contributed 2 points, 2 rebounds and committed 2 fouls. Malian center Cheick Diallo, the last signing from Fuenlabrada with NBA history (2 points and 5 rebounds), also made his debut.

The start did not seem like a duel between a team eager for salvation and another depressed by the 2-0 in the Euroleague. It was a sparkling start to the race, in which the Brazilian Leo Meindl spurred his team on (13-9, min. 5), with the responses of Jaycee Carroll, in his 450th match in the ACB, and Alberto Abalde.

The end of the first quarter featured the historic debut of the adolescent Bagayoko, a record for precociousness of the ACB, and who did not hide in its premiere: greeted with a foul in his first action, he scored a mate picking up the rebound of his compatriot Cheick Diallo, also a premiere, for a very equal closing (22-23).

Those of Pablo Laso put on their overalls with an active start by Swede Jeff Taylor to take advantage of free throws (26-30), but the ‘Fuenla’ did not let him go further, tightening the defense and above all capturing rebounds at the rival rim, with a great job from American Josh Sharma. “They have 16 points of 38 offensive rebound”, Laso complained with 38-34 (min. 17).

The whites of the ‘lasina’ took note, which would be key in the future of the game, and the one who was the most Carlos Alocén, who made a basket, stole to assist Abalde in another and added a triple with which he turned the electronic to the 38-41. Rudy Fernández rounded it out with two free throws and a triple that left the maximum difference of the game at rest (38-46).

The white avalanche did not end the intermission. Captained by Rudy, with two triples in the first two actions after the break, the whites fattened the part from the second quarter to add a 0-22 (from 38-34 to 38-56), which forced Josep María Raventós to call his family to the bank.

It seemed too late, because tracing 18 points to the leader of the Endesa League, undefeated off his court, seems almost impossible task. The locals recovered their tusk on the rebound, despite the killings of the French Vincent Poirier, and they got to ten with another from Kyle Alexander, to close the third quarter with 56-66.

Fuenlabreña faith got there, because Madrid had the game well tied. He responded to the triples of the Congolese Christian Eyenga and the American Kwan Cheatham with the fireproof Carroll (10 points in this quarter) and obtained a victory that allows him add their best away start in their history in the ACB, with 16 away wins, as well as rearming for Tuesday’s limit match against Anadolu Efes.

Incidents: Match of the thirty-third day of the Endesa League, played in the Fernando Martín de Fuenlabarda Pavilion (Madrid), without spectators due to the health measures against the coronavirus pandemic.