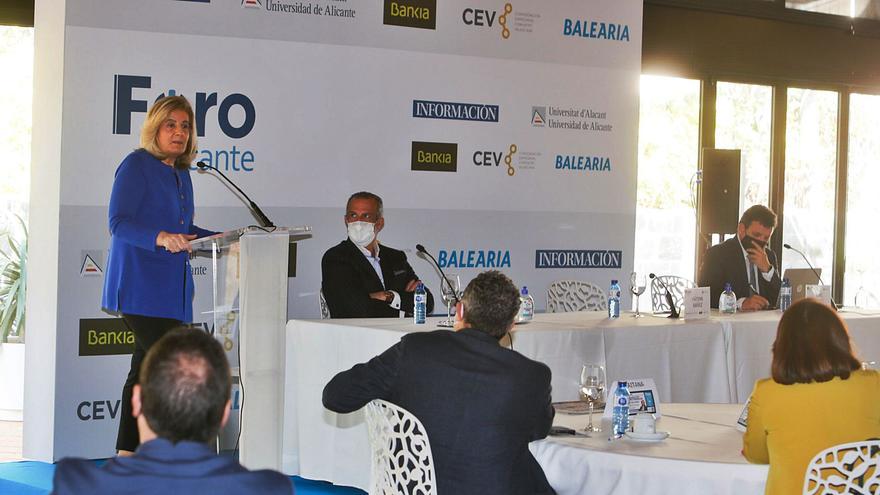 “They have always taught me that things that work should not be changed, that what does not work should be changed. And the labor reform has been a useful reform for our country ». This is how forceful the president of the CEOE Foundation, Fátima Báñez, when asked about the changes in the labor regulations that the Government wants to approve to repeal what the unions and leftist formations call the most damaging aspects of the reform that the PP approved in 2012, when Báñez herself was the person in charge of the area. Some modifications to which employers are opposed.

The former Minister of Labor was yesterday the speaker of the Alicante Forum organized by INFORMATION , in collaboration with the University of Alicante, Bankia, the CEV employers’ association and the Baleària shipping company, in what meant the return to the face-to-face celebration of this format. An act that was held in the restaurant El Maestral and in which the president of CEV Alicante, Perfecto Palacio, was in charge of presenting the speaker, while the director of the Club INFORMATION, Toni Cabot, acted as moderator.

Although the initial intervention by the president of the CEOE Foundation -titled «Adding up for recovery» – dealt with the proposals of the business organization to promote public-private collaboration with the aim of accelerating the exit from the crisis, the present prevailed and the first questions that were raised in the question time of the public were to know the opinion of Báñez on the plans to repeal a reform that she herself was in charge of taking in her day to the Council of Ministers.

In fact, interest in the issue was already evident in the presentation made by Perfecto Palacio, which thanked the speaker “for the courage she had at the time of leading the labor reform, because I am convinced that without this reform the companies would have suffered a lot ».

As expected, the former minister vehemently defended the legislative changes of 2012 which, as she stressed, contributed to introducing a “new culture of employment” in Spain, based on “flexicurity”. Modifications that, in his opinion, have made it possible in this time to avoid thousands of layoffs and have contributed to greater job creation in the boom years.

And, as proof of the benefits of the reform, he gave as an example the proper functioning of the ERTEs to contain the increase in unemployment during the current crisis, since it was this legislative change that eliminated the need for prior authorization by the authority to apply these temporary adjustments. One of the keys, in his opinion, so that now they have been used so profusely.

But Fátima Báñez went further and wanted to provide data. Thus, he recalled that in the first part of the previous crisis, 3.5 million jobs were lost, while after the approval of the labor reform, employment tended to remain “because companies made alternative decisions” to layoffs. Likewise, he cited a study by BBVA Research to point out that the contract sags, which also favored this reform, have saved around 450,000 jobs in this time and that, for the first time, during the current crisis the drop in employment has been much less than the fall in GDP, compared to what had happened until then.

Likewise, he has cited another study by Standard & Poor’s that maintains that the flexibility introduced in the labor market “multiplied by three the capacity to create employment” of Spain in the boom years. In any case, Báñez did admit that the reform needs certain “updates” to incorporate the changes introduced by the advancement of the digital economy and to end the current “duality” of the labor market, between permanent and temporary.

Beyond the specific question of labor reform, in her initial speech the president of the CEOE Foundation carried out an X-ray of the consequences of the crisis caused by covid-19 in which she recalled that in the last year more than 50,000 have disappeared businesses and 300,000 million of business income have disappeared, 100,000 of them in the tourism sector. Figures that, logically, have also had their transfer in the form of a social crisis, with the increase in unemployment. “We have six million people who want to work and cannot: more than four million are unemployed, about 900,000 in ERTE and another 500,000 self-employed in cessation of activity,” he recalled.

But, more than the quantity, Báñez stressed that “the most worrying thing is the qualitative aspects.” And he referred, specifically, to three groups to which, in his opinion, special efforts should be devoted. On the one hand, he stressed that youth unemployment already exceeds 40%. “The world and Europe run the risk that young people become the generation of confinement,” he said, referring to the difficulties that those who have finished their training have had so much during this time and have not been able to join the labor market , such as those who had been in their jobs for a short time, who are the most susceptible to losing it. He also recalled that there are more than a million unemployed over 50, also with difficulties to reintegrate. And finally, she highlighted that the growth of unemployment among women has been much higher than among men, and that only Greece surpasses the Spanish figures in this area.

“If we want a social recovery, the most important thing is to maintain employment and save companies,” insisted the representative of the CEOE, who highlighted the liquidity measures and the new non-refundable aid that the Government has approved. But, above all, he urged to take advantage of European funds, in his opinion, one of the great levers that can promote recovery.

On the other hand, to questions from the public, Fátima Báñez was against the limitation by law of the price of rents that they raise from Podemos. “It is proven that greater interventionism in the market means a lower supply and those who lose are the citizens who need the rent,” he said. The former minister, yes, did not want to assess either the departure of Pablo Iglesias from the Government to stand in the Madrid elections, nor the current Labor Minister, Yolanda Díaz.

Political, social and university representatives attended the Alicante Forum yesterday, such as the rector of the UA, Amparo Navarro; the president of the Provincial Council, Carlos Mazón; the mayor of Alicante, Luis Barcala; or the one from Benidorm, Toni Pérez. There was also the president of CEV, Salvador Navarro; that of the Chamber, Juan Riera; that of Ineca, Rafael Ballester; that of Fopa, Javier Verdú; the vice president of Uepal, Diego Menor, or the general director of Information Content, Juan Ramón Gil, among others.