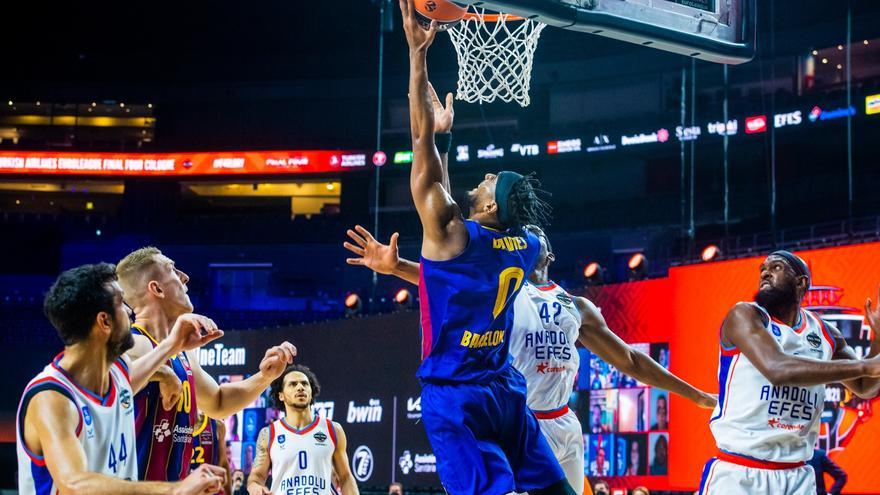 Barça could not conquer the third Euroleague in its history, falling in the final (81-86) against Anadolu Efes Istanbul, which, led by its two great stars, Vasilije Micic and Shane Larkin, was proclaimed champion of the competition for the first time at the Lanxess Arena in Cologne (Germany).

Micic, MVP of the regular phase and also of the ‘Final Four’, scored 25 points against the Catalans, the same that he did to CSKA Moscow on Friday, and Larkin, his partner on the Turkish perimeter, accompanied him with another 21.

Jasikevicius warned on the eve that, defending as in the semifinal against AX Armani Exchange Milan, Barça would not have any option before the best attack of the championship. And his players seemed to have understood the message perfectly in the first quarter.

With Calathes in the starting five despite injuring his right ankle in the semifinals and Claver of ‘3’ with the main novelty, the Spanish team came out to drown Efes from the initial jump.

But the unexpected protagonist at the start was Sanli. The outsiders of the Ottoman team resigned from the beginning to bombard the Barca hoop to feed the Turkish pivot with interior balls, who scored the first 8 points of his team (6-8, min.4).

Eight almost consecutive points from a combative Davies and the first Barça triple, the work of Higgins, returned the advantage to Barça (17-13, min.8).

And Kuric increased the income of the Catalan team (22-15) with two baskets at the end of the first quarter, after the referees whistled a technique to Jasikevicius and another to Ataman, who did not stop protesting from the side.

With Gasol intimidating in the area and Bolmaro scoring a 2 + 1, the Catalans began the second period with their maximum advantage (25-15, min.11).

Even then, Micic was barely lavish attacking the rim and Larkin was only able to score from the free throw. But Barça would stagnate in the static attack even more than its rival in the second quarter.

In addition, the good minutes of Pleiss on both sides of the court – before injuring a calf – contributed to Efes endorsing their opponent with a 0-9 partial to turn the game around (29-30, min.16 ).

Larkin took a free kick on each penetration and was adding from the free throw line and a Moerman basket gave Efes the maximum (31-38) with 38 seconds remaining to end the first half. But again Kuric would make up the electronic just before reaching the break (36-39).

Barça and Efes went to the dressing room with blushing percentages from 6.75 (2 of 12 and 1 of 8, respectively) and the Catalans also with Mirotic and Calathes, their two most decisive players in the semifinals, without scoring.

Mirotic finally made his first two points from the free kick, but Micic burst into the game to lead his team’s attack with two triples (a 3 + 1), a penetration and two assists that shot the Turks on the scoreboard ( 41-52, min.24)

If Barça resisted in that quarter, with Mirotic unhinged, it was thanks to Kuric (18 points), first, and Higgins (23 points), later, the only two men who showed success in the Barcelona perimeter. Although the Spanish-Montenegrin pivot seemed to wake up closing the room with his first triple and a basket on the horn that the referees canceled because they considered that he had entered out of time (58-65).

Jasikevicius put Claver to try to stop Micic at the beginning of the last period, he asked his men for more intensity behind and the success and the claw of Davies (17 points and 11 rebounds) and a Mirotic basket finally tied the game (69- 69, min.35).

But in the moment of truth, Larkin and Micic would not fail. Whether it was threatening from the triple, penetrating the zone without mercy or taking fouls to decide from the free kick, they punished Barça again and again in the final stretch.

Even so, three free throws by Kuric with twelve seconds to go gave the Catalans one last option (81-84). But Micic again scored the last two free throws of the final to close a cycle. And it is that Ergin Ataman’s Efes, runner-up in 2019 against CSKA, had already been around a well-deserved title for three years.

Incidents: Final of the Euroleague 2021 played at the Lanxess Arena in Cologne (Germany) behind closed doors.