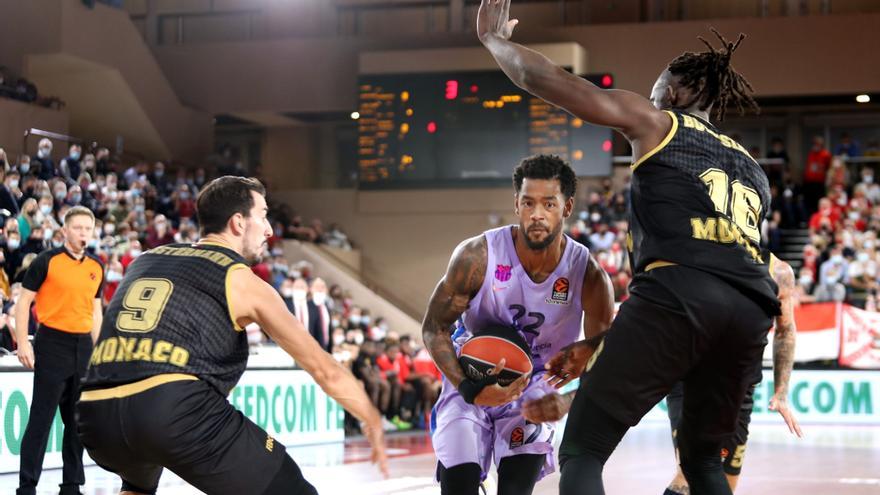 Barça, with an omnipresent Brandon Davies (27 points, 10 rebound and 38 PIR), shot with pride to finish in extra time -the second in 48 hours- with the resistance of Monaco (81-85) and add the full four wins in the Euroleague.

In a game marked by the physical basketball of the locals, the American center, author of the basket that forced the extension, became the lifeline of his team.

As in the last game against Olympiacos, which was also decided in extra time, the Barça team started something cold, which only converted 12 points in the first quarter and was left without scoring from the 6.75 meter line.

Monaco set up a physical encounter, exploiting the superiority in the zone of players like Motiejunas, who moved too comfortably, and taking advantage of James’ talent (16 points).

Although the most prominent player in the first quarter was Will Thomas. The former player, among other teams, of Valencia Basket scored 9 points without failures in the first ten minutes.

Despite Mirotic’s points, Barça’s best in the first half, the locals faced the second period with an advantage of ten points (22-12).

It was then that Jasikevicius gave entry to Calathes, who finished with 12 points, and his team improved somewhat in attack. However, Monaco’s intense defense continued to bother the runner-up in Europe.

Barça, who controlled the talented Mike James, somewhat touched his ankle, were playing below their possibilities, but he was not reconciled with his best basketball (28-20, min.15).

However, he managed to close the first half with a disadvantage of four points (35-31), the only positive note for the Catalans after a very gray first 20 minutes.

In the first minutes of the restart, the game script did not change. The Barcelona talent appeared dropper. Only Calathes, hit from the perimeter, and Davies responded to James’ sparks.

A triple by the ex-Barcelona Leo Westermann once again placed Monaco with a more comfortable advantage (42-36).

Barça found in defense and Davies’ triples -the best in the third quarter- Hayes and Smits the solution to react and enjoy the first advantage after 29 minutes (52-54).

The last act began with everything to be decided (54-56). Barça, imposed one more march on defense, and took advantage of it in attack to open a six-point hole thanks to two triples from Laprovittola (58-64, min.35).

James and Westermann responded with the same coin, once again putting Monaco ahead with three minutes to go (68-66).

Without the usual clairvoyance of Mirotic and Higgins, Barça faced the last 20 seconds with a deficit of three points (74-71).

The game would be decided from the free throw line. Twelve seconds to go, Westermann missed a shot from the personnel line (75-73) and Davies, omnipresent on the offensive rebound, took advantage of it to force extra time.

Barça dominated overtime and had an income of five points with three minutes to go (77-82), but Mike James appeared and the game adjusted again in the last minute (81-82).

Barça pressed on defense and Higgins remained cold from the free throw line to confirm the Catalan team’s undefeated condition in the Euroleague.

Incidents: game of the fourth season played at the Salle Gaston Medecin before 3,914 spectators.