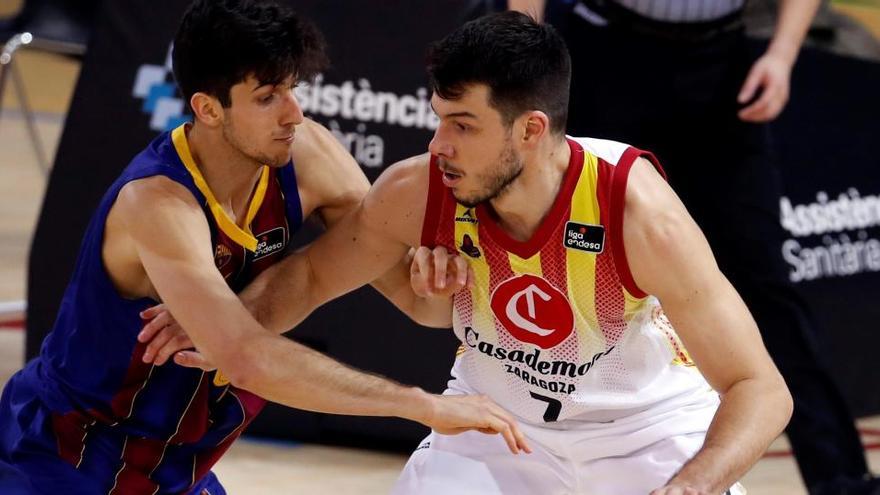 Barça easily beat this Saturday at the Palau Blaugrana Casademont Zaragoza by 107-88 and added his eleventh consecutive win in the Endesa League and is added to those he achieved in the Euroleague during the last week against Real Madrid and Baskonia.

The architects of the Barça triumph were excellent Adam Hanga (17 points, 28 PIR) and Brandon Davies (20 points, 27 PIR). Dylan Ennis’s 27 points and 32 PIR were useless for the visitors.

It is the culmination of Barça a week in which the team of Conversation Jasikevicius they beat Real Madrid 76-81 in the Euroleague on Thursday, thus qualifying for the quarterfinals of the competition, after also defeating Baskonia 71-57 last Friday at the Palau Blaugrana.

Casademont Zaragoza, the best attack in the ACB (average of 86 points per game) and the worst defense (87 points per game), showed their numbers and proposed a vibrant start to the game that led to a 15-18 score at five minutes, in which the effectiveness against the rim showed. Barça reached this point with a 6 of 6 in shots of two and Casademont, with a 6 of 7.

Jasikevicius’ team managed to turn the scoreboard with 23-21 thanks to a tray of Nikola Mirotic (min. 8), but the Italian-Argentine Nicolás Brussino finished the fourth with a triple that tied the match again, this time at 26.

Two triples, in this case by Kyle Kuric and Leandro Bolmaro, and a basket of two from Indiana put the maximum difference of the match with 45-32 (min. 16) during a second quarter of clear Barça dominance led by Cory Higgins ( 12 points in the first 20 minutes). In fact, the difference continued to grow until 53-37 (min. 19), but it was attenuated with 55-44 at the break.

And a partial of 6-16 at the beginning of the third quarter, with Dylan Ennis as the protagonist, he put Casademont Zaragoza back in the game (63-60, min. 24). Although it was a mirage. Barça returned the pull with a 13-3 run that Álex Abrines finished with a triple to establish a resounding 76-63 (min. 28).

From then on, the game languished beyond a 10-point difference and those of Sergio Hernández They no longer had any chance to surprise at the Palau Blaugrana.

With this triumph, Barça consolidates itself in second place in the standings and continues to aspire to the first, which is two victories away, which separate it from the Real Madrid, which this Sunday will visit Baskonia.

For its part, Casademont Zaragoza sees its comeback momentarily stopped in the standings and slightly away from the playoff for the title, which is now two wins after Unicaja’s victory against Herbalife Gran Canaria this Saturday.

Incidents: Match of day 26 of the ACB League played without an audience at the Palau Blaugrana due to sanitary restrictions due to the coronavirus pandemic.