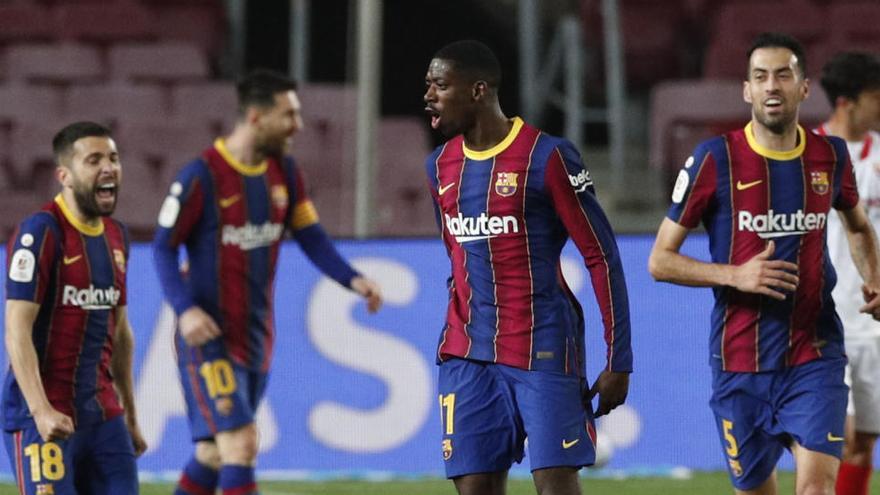 Boosted after having qualified with a comeback included for the final of the Copa del Rey, Barcelona also aspires to get a run in the fight for the title of LaLiga, this Saturday at 9:00 p.m. in El Sadar, in front of an Osasuna who is looking consolidate in the comfort of the half table and surprise.

Barça goes to the game with a great mood, after reaching the final of the Copa del Rey coming back from an adverse 2-0 in the first leg against Sevilla. This Wednesday, the Catalans turned the tie around 3-0 in a duel that went into extra time thanks to a goal from Gerard Piqué in the 94th minute.

In LaLiga, the Catalan team is second, five points behind the leader, Atlético de Madrid, which has one game less. In front of Osasuna, the Barcelona fans are looking for a boost in the fight for the title, taking into account that this day Atlético and Real Madrid can score points, because they face each other.

However, Barça will visit El Sadar with casualties, especially in defense. The injury to Gerard Piqué, who sprained his right knee against Sevilla, adds to the absences of Sergi Roberto and the Uruguayan Ronald Araujo.

On the offensive plot, the Barcelona coach, Ronald Koeman, neither will he be able to count on Philippe Coutinho or Ansu Fati, although he will recover Miralem Pjanic for the center of the field, once released after overcoming his right ankle discomfort.

With all these casualties, after an extension in the Cup and on the verge of playing against Paris-Saint Germain the return of the Champions League, Koeman could return to 4-3-3 and rebuild some lines, starting with the axis of the behind, with Clement Lenglet and Samuel Umtiti in the eleven, along with the usual full-backs Jordi Alba and Sergiño Dest.

In the midfield, Sergio Busquets, Frenkie de Jong and Pedri González They point to ownership, although the entry of Riqui Puig to give oxygen to any of the fixed lines cannot be ruled out.

Up front, Martin Braithwaite, who scored the 3-0 final against Sevilla in extra time, He could relieve Ousmane Dembélé and accompany Antoine Griezmann and Leo Messi.

Osasuna will jump to the grass of his stadium with the complicated mission of facing a team that in recent days has taken a step forward, so the men of Jagoba Arrasate They must play a perfect match to get the three points.

The Basque coach has commented at a press conference that he sees the crash as an “opportunity” to make a great game in which they will need to “touch perfection”. “We must do a great collective work. We have 28 points and we need more,” he said about a duel that he predicted as “very difficult, but not impossible,” he said.

Osasuna shall be “brave and come with a lot of people” believing in his plan to prolong the “confidence” that the latest results have given him against direct rivals.

Despite not being a final for the Navarrese thanks to the latest results achieved, the fact of being able to beat a rival of the Barcelona entity makes local footballers have taken the duel as a new opportunity where to prove their worth to spend one more year with the greatest.

Last season, Osasuna managed to get a valuable draw in the third league match against the Catalans thanks to the double of a Roberto torres who also managed to score in the 1-2 victory of the second round at the Camp Nou.

Arrasate shuffles the 4-4-2 and the 4-3-3 as the two options to try to surprise Barcelona. The Argentine Jonathan Calleri and the Croatian Ante Budimir would occupy the leading edge in the first of the two systems, while with the second the coach must seat one of the two to reinforce the midfield with Oier accompanied by Lucas Torró and Moncayola , basic players for the red interests.

The defensive solidity that David García and Aridane show day after day will be one of the keys to stopping the attacks commanded by a Leo Messi who has taken Osasuna’s measure. The Argentine has scored 7 goals in the 8 visits to Pamplona.

The coach of the Pamplona team will call tomorrow for the twenty-sixth day of LaLiga Santander.

The key: Osasuna’s courage when it comes to pressing.

The data: Osasuna has not won Barcelona at El Sadar since the 2011/12 season.

The phrase: “We must do a great collective work”, Jagoba Arrasate.