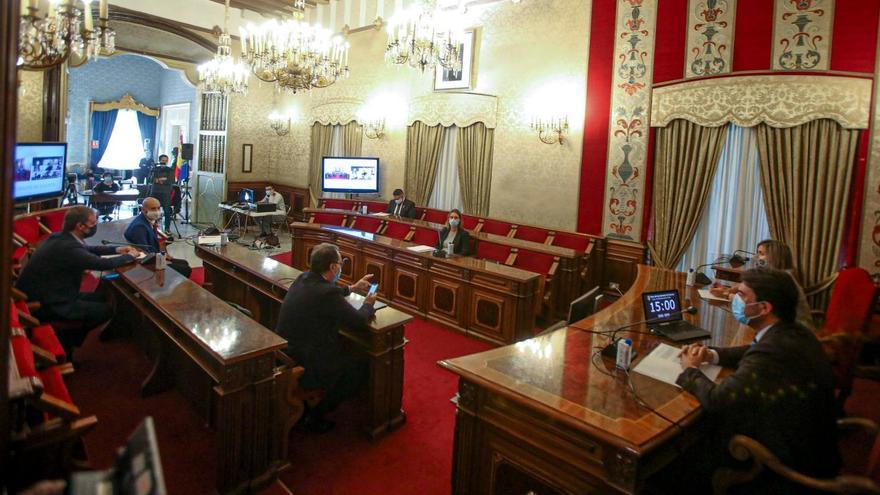 No news. ANDl Debate on the State of the City of Alicante, which was held this morning at the Plenary Hall in a mixed session, has developed in a gruff tone, with supposedly outstretched hands dialogue between the municipal government and the opposition amidst a continuous critical cross between benches and without new proposals to face the covid crisis. In the final stretch, the Mayor of Alicante, Luis Barcala (PP), has regretted the development of the debate: “No one can be proud of this Plenary Hall. This debate has not been up to the task.”

Almost four hours before, at the beginning of the day, Barcala has kicked off the debate with a long speech, in which he explained what his government carried out in the last year, marked by the management of the pandemic by the covid. “We are only encouraged to protect our people, all Alicante citizens without exception, in their health, in their economy, in their employment, in their life and in their future. But even more could and should be done. The city could not be paralyzed, nor its future mortgaged. This government team has continued to manage, carry out projects and carry out the planned actions, “said Barcala, who has once again presumed to have works underway or planned for more than 25 million euros. In his first speech, Barcala also tried to talk about the future: “A future, whether we want to or not, will be conditioned by the present, marked by the terrible consequences of the pandemic; a future that we will have to build on the memory and memory of the victims. It is true that the lines of action and the priorities with which we began this mandate have changed in a way that we could never have imagined. However, the lines of work remain in force. ” An intervention in which he has not hidden the difficult situation that the city of Alicante is facing due to the crisis derived from the covid: “Without falling into fatalism, and without wanting to see the glass half empty, a horizon is presented to us, why not admit it, critic. Dramatic, if you grant me. It’s going to be months, maybe years, very hard, something that was unthinkable just a year ago. I’d rather be realistic than sell green shoots of balance. ” As usual, Barcala has not stopped looking to other administrations, both the Generalitat Valenciana (for example, for health and social management) and the central government (for management of municipal savings). He has also used his intervention to talk about issues outside the pandemic, such as Spanish in educational classrooms. From the PP, the municipal spokesperson, Mari Carmen from Spain, has once again defended the management of the municipal government during the last year, harshly criticizing the opposition for the mood and lack of proposals to advance in a better Alicante.

For its part, Vice Mayor, Mari Carmen Sánchez (Citizens), He has tried to show a face away from political confrontation, although in his turn to reply he has changed his pace. At first, Sánchez has indicated that he would like “this debate to focus on a constructive dialogue away from reproaches and political fights.” “I refuse to follow the example that is being lived in other administrations. The people of Alicante need politicians with high sights to solve the real problems of our neighbors and move away from the tension,” he said for the final stretch of the debate to join the a harsh, reproachful tone that has been experienced during the day. Sánchez has admitted that the covid has been key in municipal management, by completely changing municipal priorities: “From the government team we have had a hectic year; where everything planned for 2020 falls like a deck of cards with the Covid. It was time to act with determination and speed, drawing up a multitude of decrees aimed at alleviating the consequences of this pandemic. To give us politicians all this credit would be hypocritical: I want to send congratulations and thanks to all the officials of that city council who continued to work from home to continue providing the best possible public service. ” In addition, it has once again defended more ambitious projects such as the Congress Center, which the bipartisan already announced just a year ago, during the 2019 Debate on the State of the City. “I guarantee you that this government team continues to work on one of our main objectives, that the Congress Palace is a reality in this legislature. ”

From the PSOE, the municipal spokesman, Francesc Sanguino, He has starred in two very different interventions, especially on the shift. The socialist began the debate with a harsh attack on Barcala: “You have been mayor for almost two and a half years and have contributed practically nothing despite living conditions that the last three mayors did not have, until the pandemic. You have failed in socially, economically, and has failed in the governance of Alicante, “underlining what he considers a social, economic and governance failure of the bipartisan. The socialist, like the rest of the opposition, has reproached Barcala for his spirit: “You are not and will never be able to approach the audacious, dialoguing, decisive and adaptive mayor that this city needs in good times and bad. Our conclusion is that it never was and never will be, and -if you have not-, you should start to think if this really is your position, you should think about whether you can offer the city what you do not have, or should have the dignity attitude of leaving for their benefit and especially that of Alicante “, said the socialist, who in turn has reached out to the bipartisan to promote agreements between the government and the opposition in a harsh context marked by the pandemic. In his second speech, much criticized by Barcala for his tone (“it seems that he is in the Comedy Club”), Sanguino has delivered a decalogue to the government with proposals to face the crisis.

The United We Can spokesperson, Xavier López, has also put the focus on the municipal government: “Your government, Mr. Barcala, shows symptoms from the first moment of exhaustion, your mandate has already expired in practice and your bipartisan is already a small party. You are an obstacle, a drag on Alicante and its government of the three rights only transmit darkness and sadness to the entire population and a continuous list of continuous controversies. Of which we have a huge list, López pointed out, in an intervention in which, like the rest of the left, has criticized social management during the pandemic, including the controversial Ordinance against Begging. López, in the same vein as his peers on the bench, has regretted that the mayor looks so much towards València and Madrid: “You, Mr. Barcala, learned from Castedo to do opposition to opposition. To dissociate himself from any responsibility, to coin as a mantra that of improper competences ”even if they are his own and talk about Pablo Iglesias, Mònica Oltra, Ximo Puig or Pedro Sánchez according to how he has to justify his disastrous social, health or health management municipal savings. Some savings that he used to do what he does best, help the banks by giving them 19 million euros while he forgets Alicante “.

Since Compromis, the spokesperson Natxo Bellido He has also criticized the management of the bipartisan, personalizing the reproaches in the mayor: “The city is having a bad time. Very bad. And unfortunately we do not have a good government to face the health, economic and social crisis that we are experiencing. This Bipartisan represents the 3 D: Disappointment, Laziness and Disappointment Your failure, Mr. Barcala, makes us think that you are not spared from the curse of the Mayors of Alicante, you are not comfortable in this role, and your party never thought of you as Mayor. And this is noticeable as this crisis grows longer, where each day that passes you look more nervous and lost. You are more concerned about opposing the Botànic than Alicante. Stop looking so much at Valencia and Madrid, to cover your failures, because in the end he will get stiff neck. ” In his speech, Bellido reviewed issues of bipartisan management that deserve, in his opinion, criticism, such as the lack of budget execution (just 13% in 2019), the management of large contracts (extended or out of contract), the lack of advance of Alicante Futura and the blocking of Edificant. From Compromís, Bellido has criticized Barcala’s lack of dialogue and his little political credit, in addition to reaching out after criticizing the capacity of the bipartisan. “You are not a good mayor and you have a very weak government team. And that is bad for the city and terrible in the current crisis. That is why today in this plenary session from Compromís we have to be very critical of your management, and qualify it as Failure. His bipartite has failed and his identity is the 3 D’s: Disappointment, Laziness, Deception. ”

Finally, from Vox, Mario Ortolá He has also been critical of the bipartisan, although even more so with the line followed by PP and Ciudadanos at the national level. “Political ups and downs, sticks in the wheels, fingers in the eyes and a sometimes regrettable spectacle is what a coalition offers in a fragile situation that keeps Sanguino in a continuous rubbing of hands. Seeing the genuflection, already permanent, of Ciudadanos so much in Congress as in the Valencian Cortes, the question is not whether their partners will make them pay for the suffocation that is causing them to fall, but when we will attend to the fulfillment of the darkest wishes of the PSOE to regain the Mayor’s Office “, has Ortolá pointed out, he has defended tourism, hospitality and commerce as the main axes for the future of Alicante. In his speech, Ortolá has also criticized the cleanliness (like all the opposition), the lack of lighting and security in the streets of Alicante.