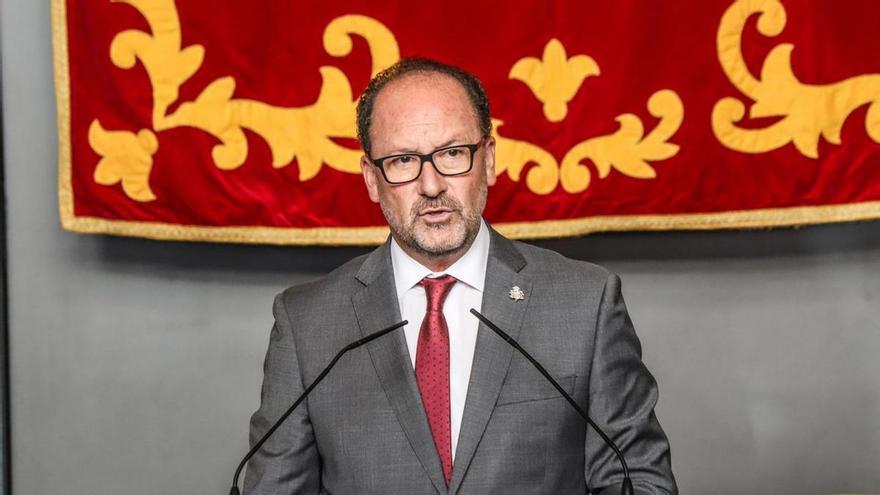 Almost seven years as mayor of Orihuela and a firm speech, that of Emilio Bascuñana, who has not moved a millimeter. The councilor of what is considered the capital of Vega Baja has worked hard to play the leading role as the Consell’s scourge in the face of the linguistic policies promoted by the Botánic, in the face of the “imposition” of the Valencian language that he denounces whenever he has the chance . The mayor and his party, the PP, have intensified the attacks against the regional government, against an Executive that they brand as “pan-Catalanist” and whom they even accuse of trying to turn À Punt into a second TV3 channel at the service of independence, by allowing Catalan to be promoted. And Catalan, precisely, is what the Orihuela municipal website advertises, which invites users to read the page in that language by “clicking” on an icon with the flag of Catalonia. Bascuñana, however, does not seem to bother him, since a neighbor has been demanding for six months that he replace that emblem with that of the Community, without success. It has even resorted to the Síndic de Greuges, but the Catalan senyera continues to wave online and the council does not even respond to the requirements, violating the rights of the applicant.

The list of facts is as follows. July 2021. A citizen asks the Orihuela City Council to rectify its website so that, instead of the Catalan flag, it costs the emblem of the Valencian Community. The consistory turns a deaf ear and the applicant decides to go to the Valencian Ombudsman. Since then, more than four months have passed without the City Council making a statement. The neighbor then urges the Ombudsman that this municipality “be warned by the Offenses Commission with the aim that these types of events that contravene current legislation and despise the identity of the Valencian people cease to occur.”

Days later, from the Sindicatura a letter is addressed to the City Council. Not to ask for explanations about the presence of the flag in cyberspace, but to ask for clarification on why the citizen has not been answered. However, that letter from the Síndic also becomes a dead letter. The local Administration does not even bother to respond. That is why the institution chaired by Ángel Luna has issued a resolution in which it reminds the council that the interested party has the right to obtain a response, since article 9 of the Statute of Autonomy includes the right to good administration and, therefore, to obtain an express response. A response that has never arrived, which means that the rights of that neighbor have been violated in the face of a request that, the Síndic remarks, “must be accepted.” Although, he clarifies that as soon as there has been no municipal demonstration, the Administration must resolve the person’s request expressly “and obviously with respect to current regulations regarding respect for the identity of the Valencian people.”

The institution concludes that, with the action of the City Council chaired by Bascuñana, non-compliance has been evidenced in addition to the duty of collaboration with the Ombudsman. However, he asks the consistory to fulfill its obligations and make a pronouncement. Nor did this newspaper obtain any response from the City Council yesterday on this matter.

The Síndic’s resolution was made public a few days before the Valencian PP, this Monday, requested the appearance of the director of public television À Punt to explain the use of public television to promote the Catalan language through the broadcast of an advertisement for the Platform for the Language.